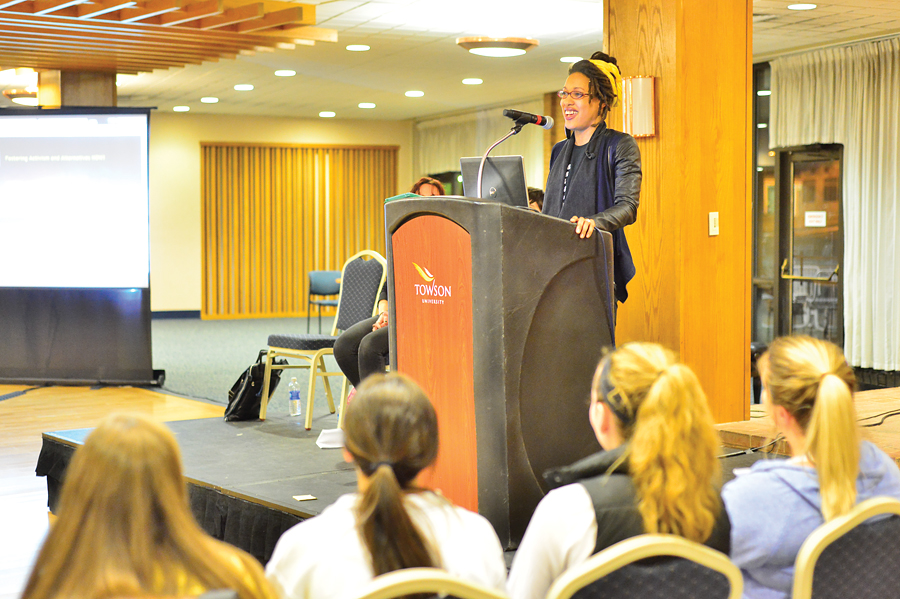 As the lights began to dim, Shawna Potter began to describe her daily frustrations with sexism, and more specifically, street harassment. For Potter, this problem represented the greatest reminder of the inequality she experiences as a woman, and acted as a catalyst for the founding of the Baltimore chapter of Hollaback!, a movement driven toward eradicating all forms of street harassment.

At last Thursday’s “My Name is Not Baby” event, Potter expressed that beginning her Hollaback! initiative was tedious, mostly due to volunteer concerns.

“Honestly, recruiting and maintaining long term volunteers was, [and] is difficult,” Potter said. “But we have had a lot of amazing people volunteer, even if they only volunteered once it was really amazing to have that kind of support.”

Chantelle Bateman, Marine Corps veteran and campaign strategist with FAAN Mail (Fostering Activism and Alternatives Now) came to Towson with Potter to discuss sexual harassment and assault as it pertains to women of color.

“After my experience with the Marine Corps, I knew I had to become a part of something that spoke for the rights of women,” Bateman said. “My work with FAAN Mail has made it easier for voices to be heard. We utilize the power of media to create constructive alternatives for women to speak and with the intent of changing the way mainstream culture views women in general.”

Baltimore Hollaback! is not only Potter’s driving force to extinguish sexism toward women, but also for people in the transgender community.

“I’m really proud of the work I’ve done with the Transgender Response Team in helping to create a PSA series,” Potter said. “These issues have always meant a lot to me and I had a chance to make a change, so I took it.”

Potter continues to assist women who have experienced street assault and educate the Baltimore community about street harassment and the detrimental effects it has on the women who endure it. However, she said that deconstructing the myths surrounding street harassment is difficult because individuals must “un-learn” the habits that society has taught to them.

“This movement and its positive effects on women seem obvious to us, but we forget that it is not obvious to everyone else,” Potter said. “I’m always surprised that some people think that it’s a compliment that you’re not taking the right way, or they’re minimizing the experience to an extreme, or they think it’s just a “cultural thing.” While it might play out differently within different cultures, in reality it’s a world-wide issue that absolutely needs to be addressed.”