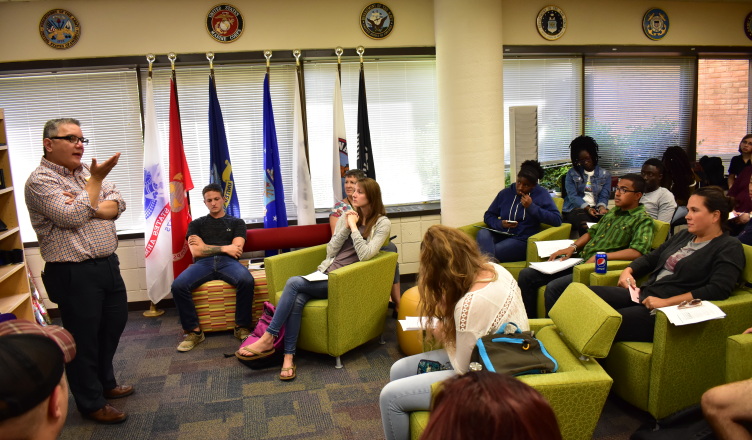 Attendees at an Oct. 4 New York Times talk entitled “Kneeling for What?” discussed the nationwide social controversy of athletes taking a knee during the national anthem.

The Center of Student Diversity, the Military and Veterans Center, and the Office of Civic Engagement and Social Responsibility hosted the talk to spark conversation about the controversial topic and to have people of different viewpoints listen to one another.

“The goal is not to get us to agree on one view or place more value on this topic than the others going on in the world,” said Associate Director for Cultural Competency and Education Brian Jara. “There is not a cut and dry take on this.”

Jara acknowledged that despite the controversy of the kneeling of athletes, such events could lead to positive change.

“This protest is clearly pointing out the inequality minorities have in our country,” he said. “Stating that, the start of this protest could be a door opener to create positive change in our country for those that do not really have a voice in our nation.”

Director of the Military and Veterans Center Benz Armstrong shared the perspective on the social issue from a veteran’s standpoint.

Armstrong said that not all veterans are against this developing movement, and that social media coverage is exploiting the military’s side.

“When I first heard about this movement I was shocked,” she said. “How could any of them take a knee during the national anthem?”

Now being a veteran transitioning back into civilian life, Armstrong said her perspective on this topic is changing.

“To be stripped of our constitutional right to express ourselves is horrible,” she said. “What are we fighting for at this point? You don’t have to agree with me, but I would take a knee.”

Armstrong stressed the importance of having American voices heard in a politically tense climate.

“Question everything,” she said. “Challenge everything.”

Assistant Director for Civic Engagement Luis Sierra hosts the on-campus New York Times talks throughout the semester. The discussions are shaped by controversial issues around the nation.

Sierra said the New York Times talks help to showcase the importance of engaging in discussion by those who are directly and indirectly affected by current issues.

“This not only creates a better understanding of those around us, but also turns education into empathy,” he said.

“There is so much police brutality that is still a chronic issue in our country,” he said. “People of color are disproportionately affected. The development of this hot social issue is going to spark some form of change in the near future. It may not be tomorrow or the next day, but change will come.”

Sierra said conversation and education on the issues concerning our nation is what will keep this controversy growing and that is how change will come.

“Protest is meant to make people uncomfortable,” he said. “That’s how change happens. The plus side of all of this national tension is that conversation is happening.”