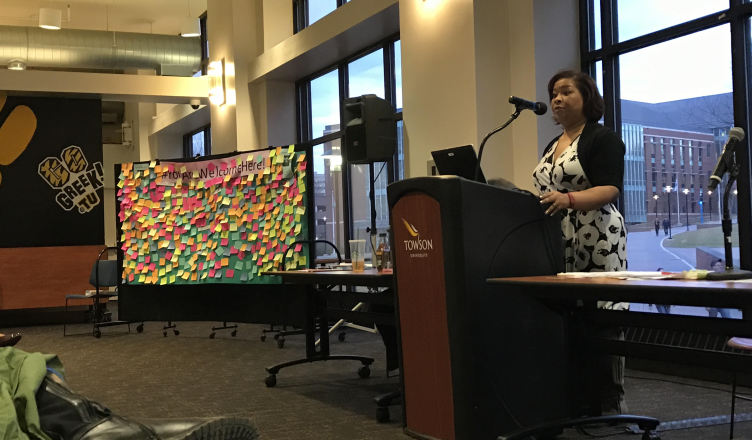 Since November, Towson University officials have repeatedly emphasized their commitment to keeping students safe no matter their nationality, immigration status or other discerning factors.

On top of this, and following even greater discourse from President Donald Trump concerning undocumented and/or foreign nationals, student government Vice President James Mileo said that representatives from Towson will lobby to make the University System of Maryland guidelines for protecting affected students a requirement for all Maryland state schools.

“At Towson University, we are committed to the idea of fostering an environment that’s inclusive, that’s diverse, and that we are here to support all of our students,” Towson Vice President for Inclusion and Institutional Equity Leah Cox said. “Whether it’s about gender identity, race, ableism, religion, immigration status – all of that – we’re here to support you.”

Under these guidelines, which will be advocated for at the State Legislature during Tiger Pride Day Feb. 28, according to Mileo, Towson University and the USM have committed to five major points of protection for students who may be at risk from the immigration orders.

Additionally, TU Police do not ask about nor record immigration status while serving and protecting the campus community, and, in accordance with the Family Educational Rights and Privacy Act (FERPA), the University will not provide immigration enforcement authorities with student records without a lawfully issued subpoena or court order.

The University reported on their website that this is a “very fluid situation,” and is subject to change on an almost daily basis. Students and faculty who are citizens or dual citizens of the countries affected by the executive order have been advised to seek legal advice before traveling outside of the United States.

A campus-wide email sent Feb. 3 reported that one member of the Towson community was directly affected by the executive order while traveling internationally. The individual returned home safely. The email also reported that the university has about a dozen faculty, staff and students from the seven countries who could be affected if they travel internationally.

Towson University officials said they were unable to provide any more details — about, for example, country of origin and if the affected member was a faculty member or a student.

At a Campus Dialogue on Immigration and DACA, or the Deferred Action for Childhood Arrivals policy, Feb. 8, administrators shared updates on the executive order and ongoing efforts to support potentially impacted students. The dialogue was co-facilitated by Cox and Vice President for Student Affairs Deb Moriarty.

“We have several students from some of the affected countries, and the rest are worried, rightfully so, about whether they might be added to that list,” Gibbs said. “So, I think events like this [are] really critical in shedding light on those populations.”

Freshman Amjad Wakil, whose family is from Sudan, one of the countries affected by the entry ban, felt that many people who attended the dialogue were removed from the situation because it doesn’t directly affect them.

“One of the most common things I get when I try to talk about it is, ‘Oh, it won’t stick,’ or, ‘That’s not going to stay around,’” Wakil said. “But people were saying the same thing about [Trump] getting electing. I feel like that’s the most important thing – to get people talking about it and actually understanding what’s happening.”

Associate Vice President for International Initiatives Saleha Suleman, a Pakistani-American who immigrated as an international graduate student, reiterated that the University’s international faculty are just as afraid as the students.

“Sometimes we think faculty and staff are very brave and not afraid,” Suleman said. “But we are equally afraid – for our future, for our kids’ futures – because many of us have migrated here a long time ago.”

Sophomore SGA Senator Fatime-Zara Beri, a DACA student, is in the process of working with the CSD to create a DACA support group that will function as a safe space for undocumented students.

“It’s something I have to think about every day, but that’s something I have to deal with on my own,” Beri said. “I can’t talk to friends or other people because they just don’t know…In a way it feels like I’m living a double identity. My friends see this nice person who just goes to school and is a student, but they don’t know all the background history.”