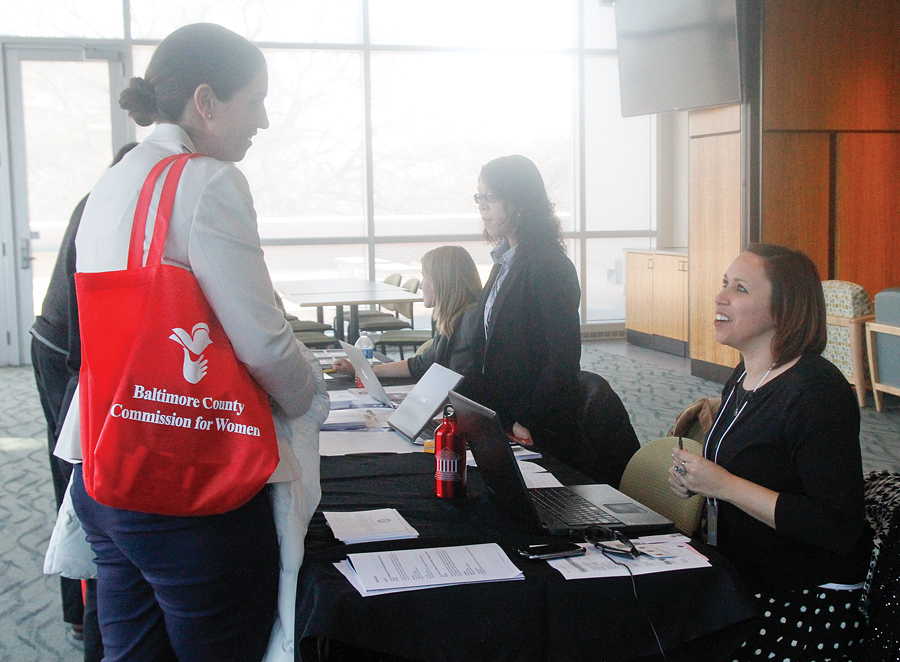 The Maryland Freedom Conference was hosted in the West Village Commons on Saturday. Activists, legislators, and government officials were in attendance for the conference, which sought to educate about human trafficking in Maryland and beyond and provide a forum for discussion on how to best achieve such a task.

The event was a joint initiative of the Maryland Human Trafficking Task Force, the Baltimore County Commission for Women, the Governor’s Office for Crime Control and Prevention and the Baltimore County Human Relations Commission.
The keynote speaker was Jen Spry, who experienced human trafficking when she was eight years old. Now, Spry has a degree in forensic nursing and works with Shared Hope International, a non-profit whose main purpose is to end human sex and labor trafficking around the world. Throughout her opening speech, Spry recounted the events she endured, while providing advice to prevent future children from possibly becoming victims.
According to Spry, most children are human trafficked from 3 p.m. to 6 p.m. when parents may be coming home from work or occupied with other activities.  She also said that first encounters between parties may seem as innocent as a child being asked to help an adult find their lost dog, which is what occurred in Spry’s case.
During her address, Spry talked about a man who had just moved in to the neighborhood and had tried to “befriend” or lure Spry, her cousin and many other neighborhood children into his apartment and force them to perform lewd acts with each other and other adults.
“We acted normal everyday, but nothing was normal. No one ever came looking, because I never went missing,” Spry said.
Spry recounted that many days, the man would wait by the bus stop or hang around the playground. To combat predators hanging around these areas that are meant to be “safe havens,” in her speech Spry asked that other adults and parents in the neighborhood be vigilant, and be the “eyes and ears” of the neighborhood.
“Be the voice of those who cry in silence,” Spry said.
Amanda Rodriguez, manager of Domestic Violence and Human Trafficking Policy for the Governor’s Office of Crime Control and Prevention, Rebecca Noto, an asylee caseworker for the International Rescue Committee, and K. Brooke Welch, a staff attorney for the Immigration Legal Services Esperanza Center with Catholic Charities of Baltimore spoke at a workshop geared towards identifying the signs of human labor and sex trafficking.
The presenters said that those affected by human trafficking situations may exhibit indicators like restricted communication and an inability to leave work. They may also not possess a photo ID or immigration documents.
“Force, fraud, and coercion” was repeated multiple times throughout the presentation to provide an idea of behaviors and situations to look for, as some immigrants that come to the United States on a work agreement end up in an entirely different job that what was in the contract.
“There is a need for new law and to utilize that laws that are already in place in Maryland,” Rodriguez said.
However, some attendees of the conference saw flaws in the government’s current approach to the fight on human trafficking.
“There is a disconnect between the laws on the books and the laws in action,” Dr. Kimberly Mehlman-Orozco said. Mehlman-Orozco is a member of the Board of Directors for the Justitia Institute, an anti-trafficking, immigration and social justice non-profit organization.
“In a nutshell, there is no evaluation of policies, practices, or any funded agencies that external. You have organizations that are internally evaluating themselves to talk about how great they are, and without that [external evaluations], we don’t know if the money is being well spent,” Mehlman-Orozco said.
Mehlman-Orozco mentioned that there is now data to evaluate the efficacy of policies and funding as the FBI has begun to collect data on human trafficking arrests, starting in the 2013 Uniform Crime Report.
The criminalization of victims, Mehlman-Orozco believes, is also a major problem, because sometimes victims of human trafficking can be arrested and charged with crimes such as prostitution, even though they were forced to commit the act.
“There’s different levels of criminalization – are they being arrested, are they being prosecuted, are they being convicted. Even if [victims] are arrested and prosecuted, they might not be convicted, but still, it’s very dehumanizing and demoralizing to be arrested,” Mehlman-Orozco said.
However, Rodriguez also said that the task force that addresses human trafficking in Maryland has improved in decreasing the criminalization of victims.
“[Our officers] have a victim-centered approach. We have a special group of FBI agents who go out and don’t ever arrest, unless there’s a trafficking situation, and they’re arresting the trafficker,” Rodriguez said.
Rodriguez also cited laws specific to Maryland which can wipe a trafficking victims slate clean of any charges, although the victims might be arrested, as Mehlman-Orozco had stated.
“I need [them] to say [they’re] a sex trafficking victim and then [they] can get out jail,” Rodriguez said, citing a specific case when it was more difficult to get the victim to come forward.
Spry later offered advice to victims of sexual violence and human trafficking about moving on.
“Face it and make a purpose out of it. That’s where you’ll find healing,” Spry said.