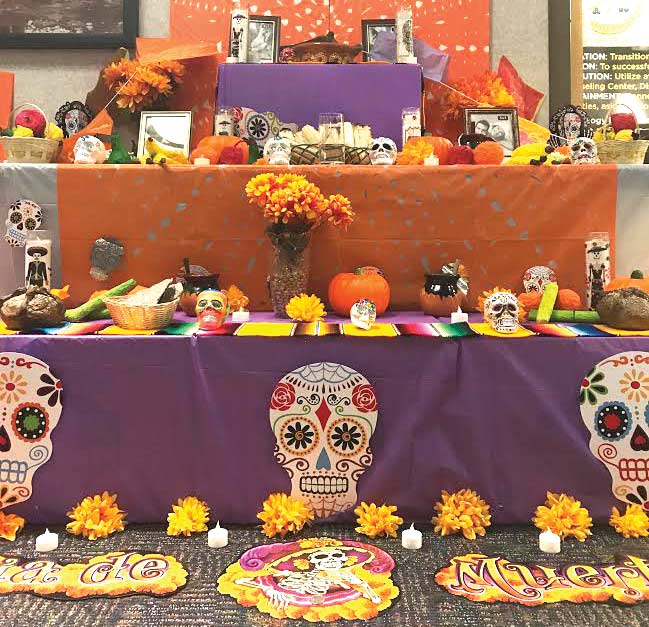 In days leading up to the event, altars were set up throughout campus that displayed various offerings traditional to the culture. In the College of Liberal Arts, one altar included coffee beans, amaranth seeds, squash and more. Such altars are usually set up in the homes of families honoring the departed, and are topped with favorite meals and drinks to feed their souls.

The event, headed by Associate Director of Student Diversity and Development Mario Rodriguez, drew in hundreds of students and families from throughout the community.

“I’m always interested in bringing different communities together, so I think this event is a way to see so many different cultures and people who are not only interested in Latin American culture, but those who embrace new traditions and new customs,” Rodriguez said.

Towson student Nevillia Cole, who is half-Filipino and half-Sierra Leonean, shared her experience.

“I think it’s great what they’re doing, letting us know and understand what the Day of the Dead is,” Cole said. “It’s not just about food, there’s more to it, there’s a culture behind it and I think that’s important.”

Attendees heading through the doors of the Potomac Lounge in the University Union were greeted by the bright colors, upbeat music and savory smells of traditional Mexican dishes. The line extended out the doors as attendees received pupusas, tacos, Mexican-style rice, refried beans and churros. Within 15 minutes plates were gone, but event coordinators brought more.

Around the room were organizational tables that promoted support and inclusion for people of all orientations, backgrounds and religions. Some tables included the LGBTQIA+ Alliance and other groups which focus on providing support for young minority students through mental health therapy. Other tables provided activities such as skull decorating, paper flower making and face painting.

In addition to performances by Towson University students, a ballet group named Nepantla travelled all the way from New York to perform a series of dances that integrated contemporary ballet with traditional Mexican folklorico.

One recurring theme of the night that Rodriguez highlighted was intersectionality.

“I think intersectionality is really important,” Rodriguez said. “A lot of times, we focus on just one checkbox, so I think it’s important for us to really see who we are as individuals. So, not only race, ethnicity, gender or sexual orientation but also status – being undocumented, being born in the U.S. and how immigration plays a big role. I think for me that’s what this event is all about.”