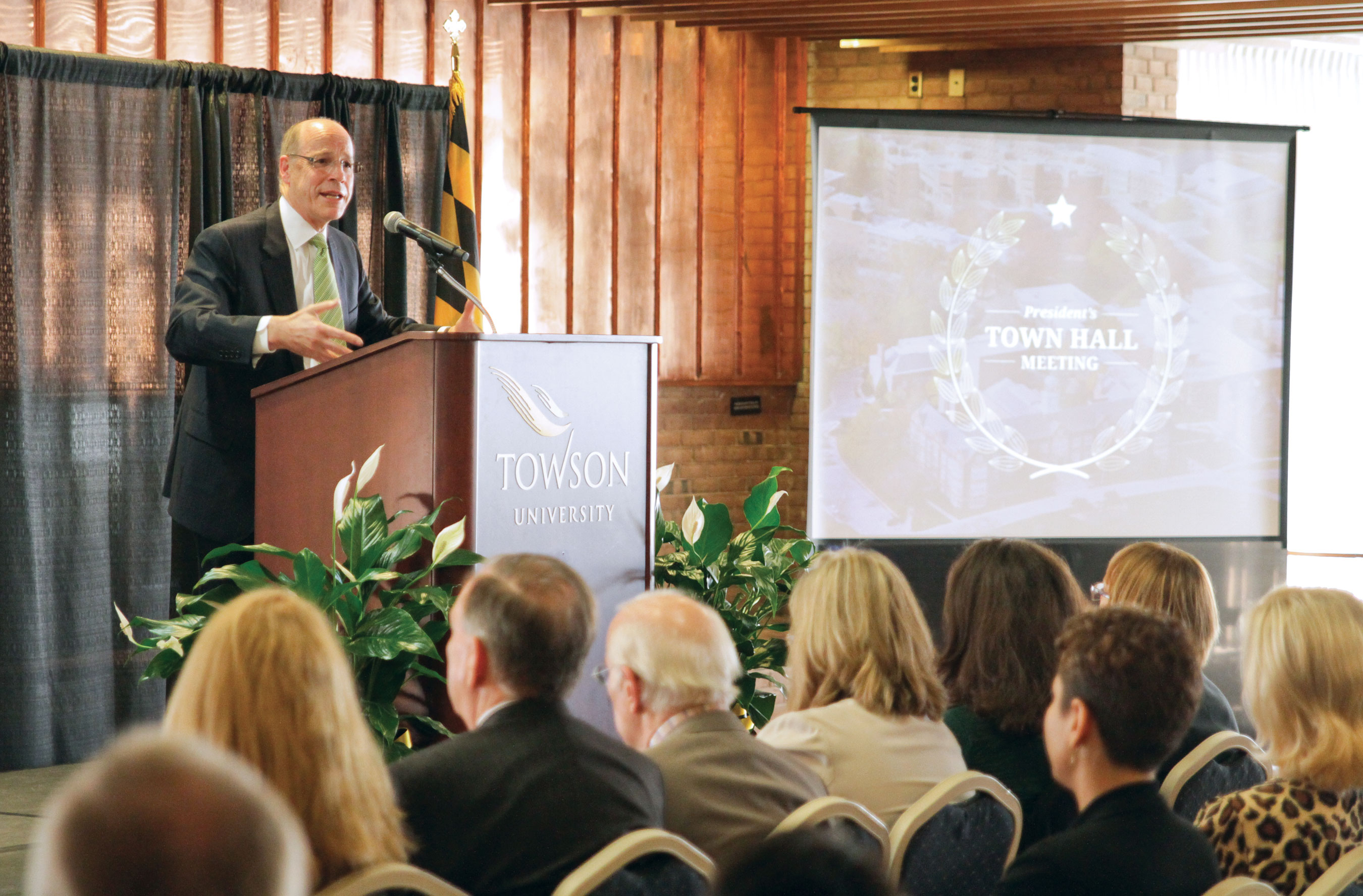 Towson University Interim President Timothy Chandler advocated for the construction of new science and health professions buildings, along with other projects, at a town hall-style meeting Oct. 7.
He said the two new buildings would richen the experience for Towson students and would meet the demand of the University’s rapidly growing STEM and health professions programs.

Chandler also said that the Fisher College of Science and Mathematics has grown 130 percent since 1994.

“The level of demand and the level of growth continues to drive the need that we have for these two new buildings,” he said.

Renderings set up at the meeting illustrated what the science building could look like.
Graphics included breakdowns of what would be included on each level of the proposed five-floor structure.

To help secure funds for the building, Chandler has taken lawmakers through what he has called his “haunted house tours.” In a previous interview with The Towerlight, Chandler said that such tours have entailed leading visitors through the aging Smith Hall on some of the hottest days of the year.

According to a chronology compiled by Cook Library, Smith Hall opened in 1965. During the town hall, Chandler said that the earliest the new buildings would be completed would be 2020.

Chandler took over as acting president in August 2014, when the late President Emerita Maravene Loeschke announced she would be taking a leave of absence due to health reasons. When she later resigned her position in December 2014, Chandler became interim president. Loeschke died June 25 after a battle with adrenal cancer.

In April, Chandler announced that he would enter his name for consideration for the presidency.
He said TU’s 150th anniversary celebrations have forced the university to look forward into the next 150 years. He said that the festivities have been a “campus-wide effort.”

“We are Towson, and we are out there,” he said. “And people are really realizing what a great place this is. Our trajectory is very much up and away.”

“I’ve noticed through talking to a few other graduate students that a huge portion of people’s decisions to go elsewhere was housing,” Houston said. “Are there any future plans for graduate housing? I noticed that’s a significant factor for a lot of students.”

Chandler responded by saying that “housing in general is something that we are looking at very closely.”

He said undergraduate students who live on-campus are typically more engaged, more involved and more successful than those who live off campus. What needs to be figured out, he said, is how to extend that engagement and success to graduate and transfer students who may not be able to afford to live close to campus.

“It’s tough to buy a house,” Chandler said during the town hall. “It’s expensive to come and live here, and for graduate students, that’s obviously very true also. It’d be nice to have some ‘subsidized’ on-campus housing for our graduate students. So, we will be looking at all of those things.”

Chandler said on-campus housing “for all levels,” including graduate students and faculty, is part of the school’s updated Master Plan.

Other audience comments included inquiries into guidance for junior and pre-tenure faculty, campus sustainability and green initiatives, and the university’s involvement in the greater Baltimore area.

“We are a place that is very much on the rise,” Chandler said. “People are taking notice. They really are.”