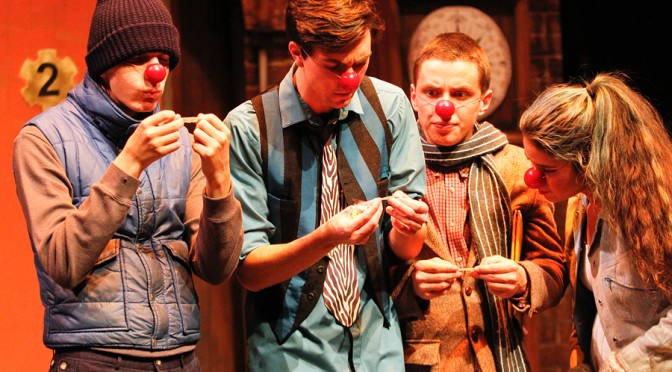 When people think of clowns, they think of powdered faces, big shoes and people who do crazy things to make others laugh. Some may even think of a more recent portrayal of clowns with the character of Twisty from Ryan Murphy’s television show “American Horror Story: Freak Show” on FX.

“What your idea of a clown is, isn’t really what a clown is. There are many different types and facets,” junior Zoe Jenkins said.

“That was a concern of ours. When ‘Freakshow’ came out, [we thought] is anyone going to come see our show,” Williams said.

Instead, “13 Clowns: An Evening of Clown Bagatelles” features the type of clown known as European clown. This style still has elements of comedy, but it is more focused in reality. As a result, the director, Tom Casciero felt that this style was the best to depict the show’s rendition of the hero’s journey, a narrative that has been used in stories for many years.

“In our show, that’s the skeleton I was using and developed the work from the ideas,” Casciero said.

In the narrative, a hero is given a task to accomplish and although hesitant at first, the hero goes to complete the task. However, once the task is completed, the hero has to fight in order to get home. In this case, the twelve clowns must go on a quest in which they are required to face their own personal fears in order to rescue the thirteenth missing clown.

The honest effect of the European clown style impacts how the clown persona is portrayed. As a result, the actors clown personas are much more personal.

“We had find the truth inside of us and because of that for some us, it was a hard process,” Williams said.

In the auditioning process, Casciero said he put the actors through exercises to see how well the actors responded to one another when they fail and succeed.

“I was looking for people whose clown pop its head out and I knew I could draw it out of them,” Casciero said. “When you fail, that is when your clown comes out.”

Casciero is familiar with finding his clown persona because of his experience in performing clown styles.

“I had performed as a solo act for ten years. I worked with Dody DiSanto who was a protégé of Jacque Lecoq. Lecoq really made the idea of clown in its truth blossom,” Casciero said.

Williams, like Casciero, has a history of working with clown.

“Tomi teaches a class that has a two week look at clown, but in a much more simplistic way. When the idea that he was going to bring it in a show came up, I decided that I already had experience it in and I thoroughly enjoyed it in the class,” Williams said.

After being chosen for the show, the cast along with Casciero went through a 14-week rehearsal period. However, it was not an easy process.

“With all devised theater, there is a lot of tension and frustration. But, I think this group is really good in making sure we have a show that we are proud of to put up,” sophomore Logan Lynch said.

Despite having an intense rehearsal period, Jenkins said the most difficult part of the rehearsal process was allowing herself to be vulnerable.

“To have to figure out what makes you tick as a person and be willing for that to show in a room of people that don’t know that side of you. Once you let those pieces of you to show, the wheel starts turning,” Jenkins said.

As a way of creating intimacy between the actors and the audience, Casciero envisioned the show as taking place in a smaller theatre on campus, so the performance was moved into the Studio Theatre in the Center for the Arts. Originally, Casciero felt that the Studio Theatre was too big. However, Casciero said with the help of the set design, it made him more accepting of the space the show was put into.

“Intimacy is really a part of creating the relationship between the audience and actors,” Casciero said.

At the end of the process, Casciero said that he felt that he learned to ask more questions and communicate better as a director. However, the actors felt that they had gained something different.

“You form a relationship with your clown and under any experience, I couldn’t say goodbye entirely to him,” Lynch said.