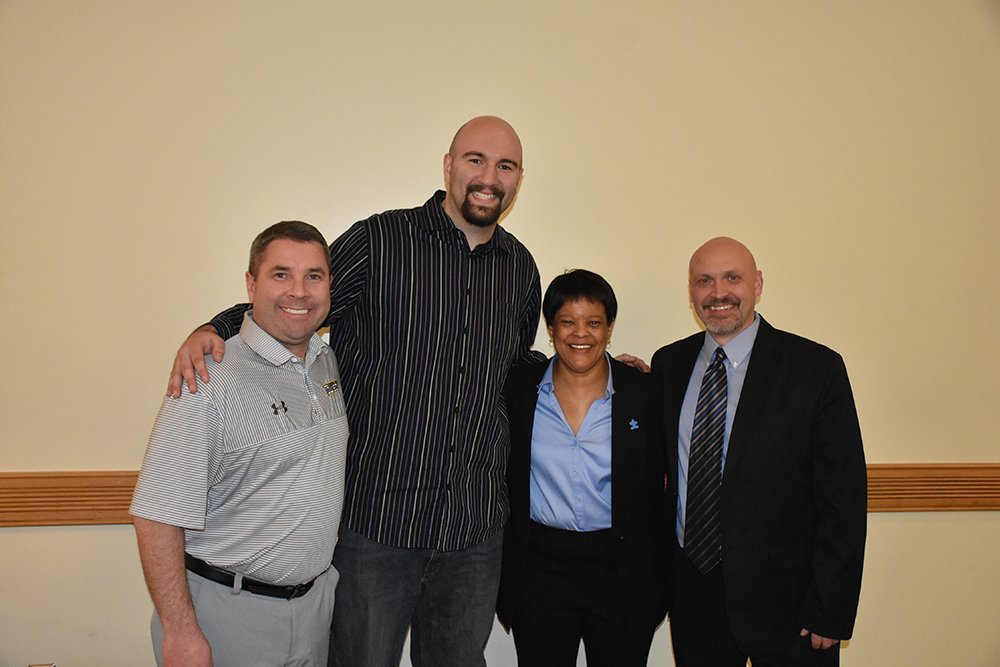 A panel of Towson University athletic coaches discussed their personal experiences with their children who are on the autism spectrum, and how to effectively communicate with an autistic individual during Towson’s “Diversity Awareness Workshop” Feb. 5.

Women’s basketball Head Coach Diane Richardson talked about her day-to-day life with her daughter, Dana, who has autism. She said not everyone understands how Dana communicates.

“Dana is non-verbal, and she is on the low-functioning end of the autistic spectrum,” Richardson said. “When we’re out shopping and she walks up to someone and gets in their face, people automatically get defensive. That’s just how she communicates. She uses grunts and noises, and a lot of people just don’t understand that.”

“He is fully integrated in the classroom, he loves to socialize, and he absolutely loves to be hugged,” Metil said. “However, asking him open-ended questions increases his anxiety level.”

Dana and Hayden demonstrate that not every person with autism displays the same behavior or needs, and that there is a range of behavior for individuals along the spectrum.

“When you interact with someone on the spectrum, know that the spectrum is so wide between Dana and my son,” Metil said.

Disability Support Services’ Learning Disabilities Specialist Kelly Rogan, was one of the primary coordinators of the Diversity Awareness Workshop. According to Rogan, Asperger syndrome is a milder form of autism. Individuals with Asperger syndrome exhibit some of the same characteristics as other people on the spectrum.

“These are all disorders that have some kind of communication or social impediment,” Rogan said. “They may have sensory integration issues, or motor development challenges. However, a person with Asperger’s is typically a high-functioning individual with autism, because they are outgoing, social and want to be engaged. While someone on the lower end of the spectrum may be non-verbal or non-social.”

The panel of coaches also expounded upon various behaviors that their children have that are often indicators of certain emotions or needs that they cannot express.

Men’s basketball Head Coach Pat Skerry discussed how his son, Owen, behaves when he is frustrated.

“When he gets frustrated, he will hit,” Skerry said. “Even though he loves his family very much, when he can’t express himself verbally, he will hit, and that is something that we consistently work on with him.”

Metil also discussed the difficulty his son faces when trying to express how he feels.

“We lost a pet and it was very hard on our family,” Metil said. “We would get calls from Hayden’s school because they didn’t know how to handle his crying. Hayden would say that if he couldn’t bring her back that he would try to be with her. So he would try to harm himself because he couldn’t properly express his pain.”

Richardson said that autism is more recognized now than it was when Dana was initially diagnosed.

Richardson discussed some difficulties she experienced during a time in which people did not fully understand or recognize autism.

“We were even asked to not attend church because we were told that Dana was a distraction,” Richardson said. “So we said that if Dana couldn’t attend church, then we wouldn’t either.”

Now 33 years after her diagnosis, Dana attends a school during the day where she feels as though she can be herself is surrounded by other people that share her disability.

Most people who have autism also possess a type of sensory processing disorder. This means that certain textures, noises and sights can greatly irritate an autistic individual, more than a non-autistic individual.

“Hayden hates loud noises and places,” Metil said, “Once we had to leave a basketball game because the horn was too loud for Hayden.”

Each panelist expressed concern for their child’s well-being. They understand that while they care for their kids, the world may not.

“We worry about if our son will be able to get a job, and ultimately have a good future,” Skerry said. “Towson is a safe space. But the concern for us as parents is all of the unsafe spaces. It is so important that people are educated.”

Anthony Ianni, the first men’s basketball player with autism in NCAA history, was the keynote speaker at the workshop.

According to the Autism Society, over 3.5 million people live with autism. Ianni wants to be a voice for those people, and all people in need of encouragement.

Ianni urged audience members to be persistent in attaining their goals.

“Live your dreams and accomplish every goal you’re going to have in life,” he said, according to Towson Athletics. “Be relentless and attack them.” 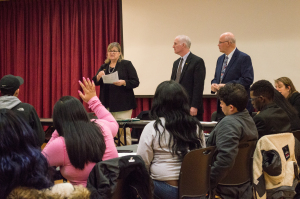