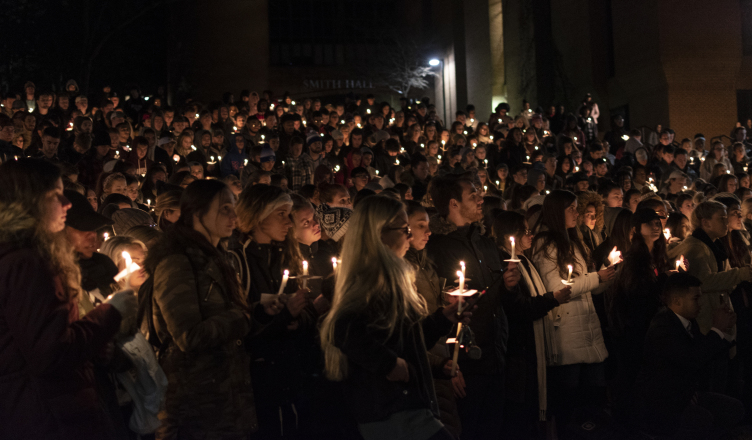 UPDATE: The Baltimore County Police Department has identified Bahadur Gurung as the suspect in the December 8 hit and run incident that resulted in the death of Towson University student Mzimazisi Ncube.

Students, family and friends huddled together against the cold at a candlelight vigil in Speakers Circle Tuesday night to pay their respects to a Towson University student who was killed in a hit-and-run Saturday night.

Mzimazisi “Mzi” Ncube was 20 years old when he was struck by a 2007-2019 Toyota Tundra or Toyota Sequoia vehicle while crossing North Charles Street at about 10:30 p.m. The car sped away as Ncube fell to the ground and was hit by another vehicle, a Mercedes-Benz, whose driver stopped and called 911.

Ncube was taken to a hospital, where he was pronounced dead.

Ncube was a sophomore pre-accounting major and new member of the Alpha Sigma Phi fraternity. Ncube transferred to Towson from West Virginia University after his freshman year for in-state tuition.

Clay Smith, president of Alpha Sigma Phi, remembers Ncube as an extraordinary man. Smith thanked the community for the support the fraternity received in the days following the accident.

“He was always a delightful person to hang out with, and could make friends with anyone,” Smith said. “If you never met Mzi, I can honestly say you missed out.”

Noah Jones, the executive vice president of the Interfraternity Council (IFC) and a brother of Alpha Sigma Phi, expressed that he was also thankful for the support of the community. He said as he looked out at the crowd that the impact Ncube had on the community was clearly a large one.

“The outpouring of support we have received over the last couple of days has helped show my brothers and i that this is not a community but a pack,” Jones said. “Brotherhood, sisterhood, or whatever else you subscribe to, is what keeps us going through sad times like this. I hope everyone here leaves feeling stronger than when they arrive.”

The Towson community mourned the life of 20-year old Mzimazisi Ncube at a candlelight vigil at Speaker’s Square Tuesday evening. | Photos by Brendan Felch/ The Towerlight

“We’re saddened by the loss of this young life — a student philanthropist and mentor, with a most promising future. Mzimazisi will be sorely missed by all,” Schatzel said in the statement.

Rev. Laura Sinche, president of the religious staff coordinating council, told attendees that God hears the pain and grief of those suffering before leading members of the community in prayer.

“All of our traditions say that God honors the sacredness and the beauty of all life, and it’s always a tragedy when that life is cut short,” Sinche said.

“I think one of our greatest fears is that Mzi was alone that night, but it’s clearly obvious that he was not alone,” Ziphe Ncube said. “It’s nice to know that even though Mzi had a big family at home, he also had a big community at Towson, at West Virginia and at church.”

Nomazwe Ncube added that one way the family was finding contentment was knowing her brother had been happy because of the time he spent with those around him. Smith agreed with that sentiment.

“Life isn’t about waiting for the storm to pass, it’s about learning to dance in the rain,” Smith said. “With Mzi in our hearts, we will learn to dance again.”