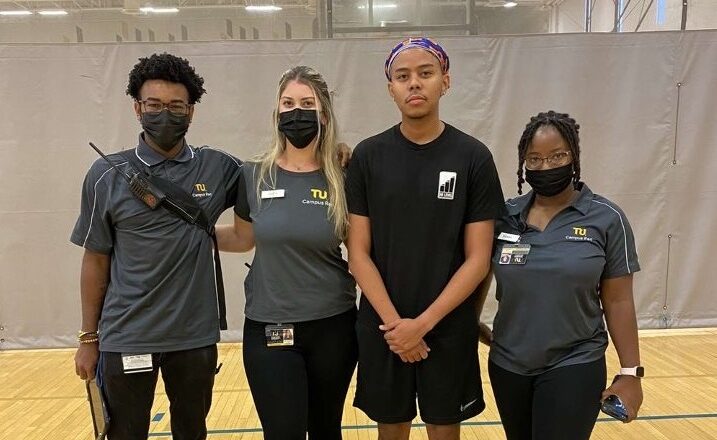 Professional tennis player Naomi Osaka and famous rapper and TU alum, Cordae, made a surprise visit to campus on Sept. 17 to play basketball in Burdick Hall with current students.

Osaka and Cordae, who have been dating for about two years, arrived in Maryland following a trip to New York City where they attended the 2021 Met Gala.

While Cordae played basketball with some students, others crowded around the court to watch. After the game, he took time to pose for pictures with those in attendance before walking back out to the van that he arrived in.

When the doors to the van swung open, onlookers got a quick look at Osaka, who was sitting inside. Osaka has tried to enter Burdick Hall with her dog, but was unable to enter as Burdick Hall rules state that pets are not allowed.

Jillian McIntyre, a TU senior and Campus Rec employee, said that protocols did not allow her to let Osaka in with a pet. In keeping up with these protocols, McIntyre was commended by the director of the gym.

“We haven’t really ever made that exception, and actually the director of the gym came and found me and applauded me for not making any exceptions for celebrities, and for making Cordae and his security purchase guest passes to get into the gym,” McIntyre said.

Dontae Smith, a junior at Towson and a Campus Rec employee, was in a meeting at Burdick when he noticed Cordae through the window.

“I was in an inservice meeting for Campus Rec and I looked out the window and I saw him hopping out the van and I was like, ‘Bruh no way,’ and I went out of the meeting because I had to work after, and I went in the gym and he was just hooping,” Smith said.

TU sophomore Bradley Comer was working out at the gym, when he received a text that Cordae was playing basketball. Comer immediately paused his workout to join in.

“I was super excited when I saw Cordae,” Comer said. “He’s an artist I look up to and often enjoy music from so it was cool to see him on our campus.

Cordae, who grew up in Maryland, attended TU from 2015 to 2018 when he dropped out to move to Los Angeles and pursue music full time.  This is not the first time that Cordae has come back to Towson. He visited last semester to film a music video for his song, “More Life.”

Fans of Cordae are expecting him to release a new album titled “From a Birds Eye View” soon.