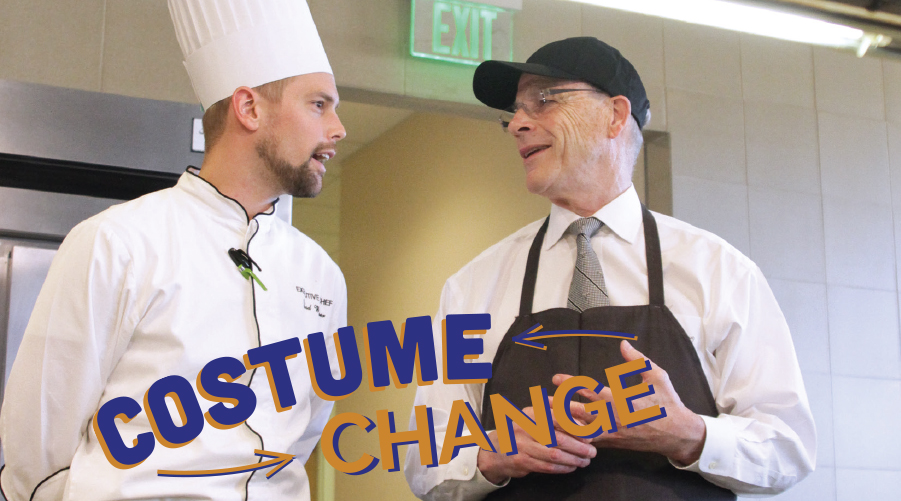 To get into the Halloween spirit of putting on masks and creating mischief, The Towerlight asked a few prominent members of the University community to get out of their comfort zone and try something new. The people we asked were supervised at their new, temporary place of employment and tailed by a Towerlight photographer and reporter.

Keep reading to check out their adventures and see what kind of trouble we stirred up. Visit thetowerlight.com for additional video footage.

Just before the dinner rush in the West Village Dining Hall, Interim President Timothy Chandler dons a black apron and cap before taking his place behind the “daily specials” counter lined with food.

As students scoop the steaming food onto their plates, President Chandler eagerly asks each of them about who they are, what they are studying, where they are living and how their day is going.

Some appear to enjoy the friendly bout of questioning while others seem confused by it. Regardless of the response, President Chandler keeps smiling and engaging with each student and employee he meets.

“It must be a shock to them to turn up and have the president standing behind the counter,” President Chandler said.

He is awestruck by the many made-to-order options available to the students, and recalls his own student dining experience as he eyes down a heaping pile of French fries before sneaking one out of the warming pan.

“Absolutely nothing like what I experienced as an undergraduate, I have died and gone to heaven, that’s what it feels like,” he said. “I mean the food is just outstanding quality and they have got such amazing choices.”

He learns from Executive Chef Chad Werner that the kitchen can make up to 130 pizzas a day, is run by a staff of 52 employees, and aims to accommodate every student’s particular needs.

Werner even meets individually with every student with allergies or food restrictions to provide them with safe options. Chandler was thankful to the staff for all of the extensive food preparation, and enjoyed receiving an insight into both their lives, and the daily lives of students.

He promised to bring his wife to the dining hall for dinner soon, even though he said, she probably wouldn’t let him eat all of the pizza, hot dogs and fries he would like to.

SGA President Kurt Anderson becomes a newsie and hands out copies of The Towerlight at Saturday’s Homecoming tailgate.

In front of him, a student swipes their OneCard to enter the building’s main door while behind him, the elevator doors ding and let off another student. They exit through the lobby’s back door as two more students enter. Feldmann leans forward to check for the small dark blue sticker in the lower left corner of the student’s OneCard that identifies them as residents of the building before they scurry past the desk.

“I probably could get the hang of it eventually,” Feldmann said. “I think it would be hard if I was here behind the desk by myself and I had people coming in from two different doors, somebody signing somebody in, somebody else can’t find their key, somebody else is asking a question.”

Fortunately for Feldmann he was not alone as Newell and Richmond Hall CC Manager, Courtney Smith, taught him how to check IDs, sign guests into the building, log the lobby’s atmosphere and sign out a spare room key to a student who had forgotten their copy.

“I really didn’t know what to expect, I didn’t know what I would have the opportunity to do,” Feldmann said. “Courtney was very good about showing me everything that she does back here for and letting me actually do it, that was the fun part.”

Because he did not live on campus when he was a Towson student, Feldmann said that he was fascinated by the CC desk system.

He pointed to Smith’s professionalism, the detailed record keeping and the specific procedural steps that must be followed in certain circumstances, like borrowing a spare key or signing in a guest, as the most impressive and surprising aspects of the job.

Feldmann said that the experience was a lot of fun for him primarily because he got to interact with students, which is his favorite part of his job.

“This experience today will help me do my job better because now I will have a much better understanding of how this residence hall process works,” Feldmann said.

Associate Vice President of Campus Life Teri Hall, said that she always recommends the student run movie rental store Tiger Reels to almost everyone she meets. On behalf of The Towerlight, Hall agreed to work behind the counter with two students who help to keep Tiger Reels operational.

“It was interesting to see the process,” she said. “I also just like getting to know and meet students that I wouldn’t normally get to meet, and talk to about their student experiences.”

Hall said there was a lot to remember when it came to finding the coordinating number on the spine of a DVD case among hundreds on the wall behind the desk, all while the customer waits eagerly for their movie.

Those who rented a movie that afternoon were a fairly even mix of students and faculty, which Hall was surprised and pleased to see.

“I always like it when we can find opportunities for students to interact with faculty and staff outside of the classroom,” Hall said. “To be able to be in places where we can have conversations about life and what is going on in the classroom and how it is applied to real life. Those are some of my happiest moments when we are able to do that.”

She was also proud that Tiger Reels has remained successful since its creation 20-25 years ago, despite the growing popularity of online movie and television streaming.

“It would have been great if they had those candy racks that Blockbuster used to have, you know?” Hall said.

Deb Moriarty, vice president for student affairs, said that most of her daily work on this campus is done “behind the scenes.”

So, without any formal training, The Towerlight stuck Moriarty behind the cash register at the University Store to ring up some customers.

By the time two customers had gone through the checkout line at Register three, Moriarty said she felt pretty confident. She called the registers “very user friendly.”

“I really loved being in a role where you have face-to-face interaction with students,” she said.

She took the time to ask a few questions of every student that came through her line. She asked almost everyone about the upcoming Homecoming game.

Some recognized her. A few looked annoyed that they got in line with a cashier who was still mastering the system. Most, however, seem amused, especially when they understood what was going on. Shelby Flippen, who works at the store, was tasked with “training” Moriarty and peeking over her shoulder to make sure nothing went wrong.

Moriarty said that, when she was younger, she had worked as a lifeguard, but never before in a retail position.

“It’s always fun when you have an opportunity to really put yourself in the middle where students are,” Moriarty said. “I loved it. I could have spent much longer there than I did.”