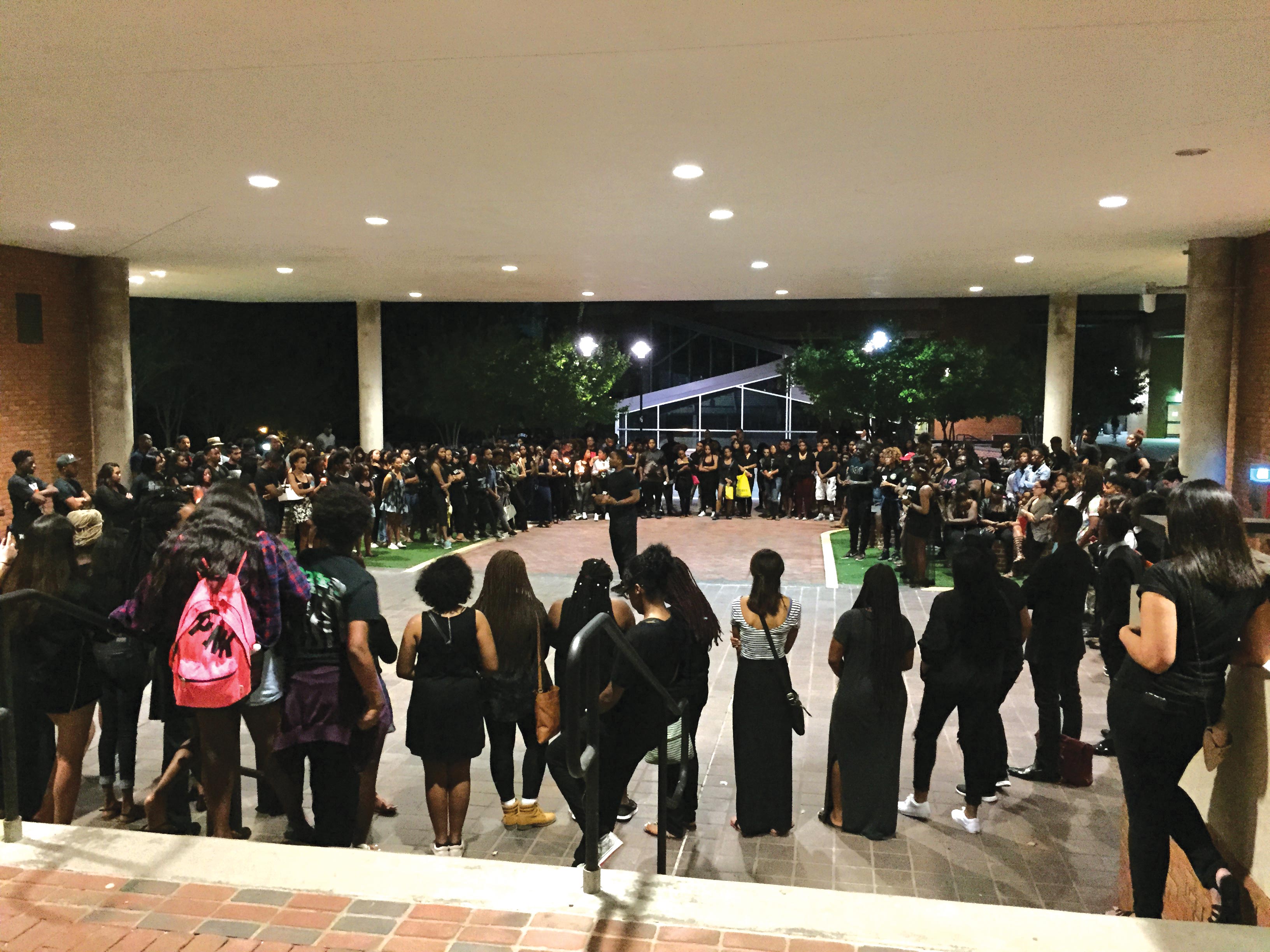 Nearly 300 students filled Freedom Square the night of Aug. 26 to show solidarity and start a conversation.

For Edwards, who has been involved with both on and off campus social justice movements since his freshmen year, the purpose of the event was to create a safe space for all students to speak about those topics of social injustice and police brutality that have saturated the media, in particular following the events of the unrest in Baltimore after Freddie Gray, a black 25-year-old man, died after being taken into police custody.

The crowd, dressed primarily in black to reflect the event’s hashtag, stood in solidarity as the night began with a few words from Edwards. This was followed by a moment of silence for Alison Parker and Adam Ward, the two journalists who were killed during a live broadcast that morning.

Edwards offered anyone in attendance the opportunity to speak or express their feelings, and encouraged a free, unstructured, open floor conversation.

Following his speech, three students, including Korey Johnson, John Gillespie, the students who organized the student march in Baltimore last spring, and Vicky Hunte, led the crowd in a callback chant of “I am black, I am beautiful,” before performing a spoken word poem called “Open Season.”

One by one, students stepped forward to bring new perspectives and opinions to the discussion.

Malachi Sheppard, a transfer student, mentioned that it was important to educate white people, and people of all races, about the movement.

Junior Sharon Ashe said she felt that the event was a positive start for not only the black community, but also for all individuals on campus to interact and teach each other about these topics.

“It was a good start for us to get through to each other in the community as black people as well as the other people on campus, not just black people but everyone,” Ashe said.

Uniting all the students, staff and faculty of Towson’s campus was one of Edward’s goals for the event. After learning about a protest held in Washington, D.C., on August 15 called Blackout DC, Edwards felt inspired to bring the energy of that movement to Towson. He hoped to collaborate with all elements of Towson’s campus including the TUPD and the Student Government Association (SGA) where Edwards is also a senator.

“It’s not about who you are, or where you came from, or your ethnic background, it’s basically just help change the community, change for everyone,” Edwards said. “As upperclassmen, it is my obligation; it is my job to give that reaching hand to underclassmen because juniors and seniors did that for me and my peers when we were freshmen.”

Senior Kayla Tullis said that at the event she saw everyone there coming together for a cause that is larger than the individual.

“The cause is bigger than ourselves, and this is the first step of having everybody together and being able to branch outside of the University,” she said. “200 people – that’s a movement. More people together is a way for our voices to be heard.”

Edwards also broached the subject of the hashtag AllLivesMatter by asking the crowd if they thought it was illogical. Nearly everyone in attendance raised their hand before Edwards said, “the hashtag is made to silence us, that is its sole purpose.”

Maia Williams, a senior who helped to organize the event with Edwards, said that the goal of the event was to show students, particularly African-American students, that Towson University cares about them, and is aware of and responding to the events and movements currently taking place in America.

“We’re doing what we can and we’re going to make students feel comfortable, whether that means that they want to go out and protest, or they want to stay here and have conversations with us and educate the campus community – we are here for that,” Williams said.

Edwards felt that the event was a strong and positive way to begin the semester, and that through the organization of similar events, like the upcoming Project Unity on Sept. 26, that this will be a productive and unifying semester.

Junior Sey Elemo, said that she also thought the event was enriching and beneficial for the Towson community.

“I think that it is time as a community, as a student body, this goes for all students, all professors, all administration, it is time to acknowledge formally and publicly that there is a race issue at Towson and we need to begin the process of dismantling this issue and this system at Towson,” she said.