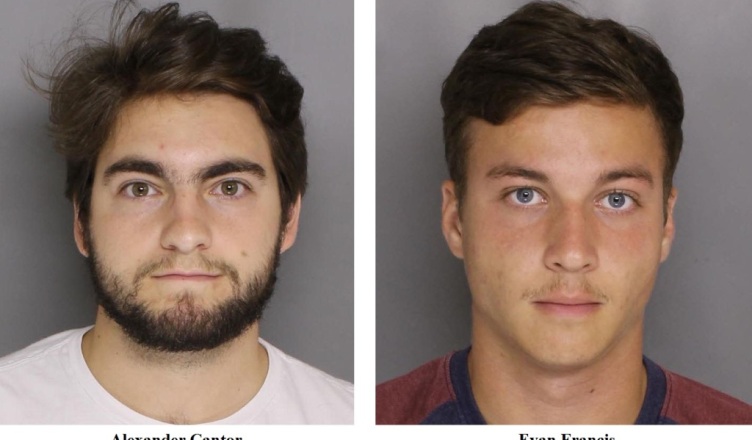 Cantor was charged with hazing and reckless endangerment following the hospitalization of Michael Nanan, a Towson student who was pledging Tau Kappa Epsilon in spring 2016. Nanan was made to drink “caustic substances” during a pledge event and hospitalized hours later.

Nanan, who spent six days in the hospital, testified that he did not know, exactly, what he was made to ingest during the hazing ritual. He described three substances – vinegar, pickle juice that may have been mixed with something else, and a third “mystery” substance.

In Maryland, “hazing” is a misdemeanor that carries a jail sentence of up to 6 months and fines up to $500.

Cantor’s prison sentence was immediately suspended, so he will not spend any time incarcerated. Cantor was instead sentenced to 6 months of unsupervised probation and 100 hours of community service.

Wyman said that hazing was “not a crime of intent,” but that a dangerous situation was created.

“[Cantor] knew something bad was going on,” Wyman said in court.

Doctor Andrew Rosenstein, the gastroenterologist at St. Joseph’s Medical Center who treated Nanan, and an expert in gastroenterology, said in court that the Nanan sustained “a lot of acute injury.”

Rosenstein compared the burns that he saw in Nanan’s stomach to the burns someone would get from putting a hot clothing iron on the back of their hand. He said Nanan had severe burns and other injuries in his stomach and esophagus.

Nanan first came to the hospital with renal failure and severe dehydration. While the injuries did not become fatal, Rosenstein said he was worried that Nanan would need surgery, possibly to remove his stomach.

“I believe the cause of [Nanan’s] injuries was from a caustic substance that he ingested,” Rosenstein said in court.

Nanan said that Cantor was the “pledge master” and therefore would have been responsible for organizing pledge events. Cantor and Linkoff instead said that Cantor’s role was that of “Hegemon” or “pledge educator.”

Nanan testified about two hazing events – one on Tuesday, March 29, and one on Thursday, March 31.

At the Tuesday event, the pledges were made to eat from a “beach cooler” that Nanan and Cantor both testified was called a “BOF,” for “bucket of fuck.” The three men each testified that the ingredients of the “BOF” were different, but a consistent detail was that the mixture was severely spicy.

At the Thursday event, the pledges were meant to do exercises and recite knowledge of the fraternity and its brothers. When someone gave an incorrect answer, they had to eat cat food and/or drink the unknown substances.

What is clear is that Nanan eventually was taken to the hospital by his mother, who was notified after Nanan was vomiting in his dorm and “passed out” for a few seconds, according to Nanan’s testimony. He was treated for 6 days and, according to his testimony, is still struggling from the incident.

“I lost all respect from anyone because of what this fraternity did to me,” Nanan said during a victim impact statement in court. “I’m the ‘bleach boy’ now.”

Evan Francis, who was in charged of “risk management” for the fraternity, was sentenced to probation before judgment in October. TKE has been suspended from Towson’s campus since March 2016, when University officials learned of the incident.