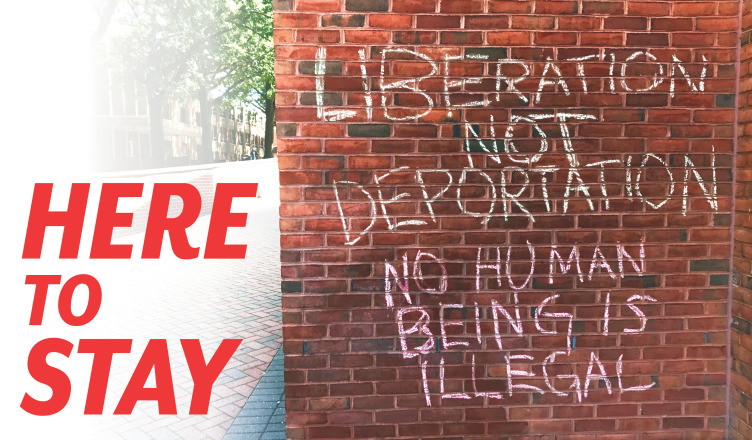 The Obama administration created DACA in 2012 to protect undocumented immigrants from deportation if they had entered the United States before they were 16 years old and met other requirements. However, Trump moved to end the program last week, allowing a six month window for Congress to legalize DACA.

At Towson, students like Latin American Student Organization president Emely Rodriguez are pushing back on Trump’s actions against undocumented immigrants.

Rodriguez wants DACA recipients to know they are not alone.

“We see you, we hear you, and we’re fighting and resisting on with you,” Rodriguez said.

After Trump announced his rescission of DACA, LASO released a statement on social media, encouraging people to take action and to urge their representatives to advocate for DACA and its about 800,000 recipients.

“Though today has only further disheartened many of the members of the Latinx community and our allies, we must continue to resist,” the statement from LASO said. “We must come together as a community and stand up for the hardworking undocumented immigrants in this country, and on our campus.”

For many DACA recipients and their loved ones, the next six months will be frightening and uncertain.

“My greatest fear would be that despite all of that, despite everybody showing their support, we still lose,” Rodriguez said. “Because that’s when the greater danger happens. We have students who fear going back to a country they don’t know.”

Rodriguez is from El Salvador, and while she is not a DACA student, she still fears the idea of returning to a country where she would not be welcome.

“I would be shot on sight for being American,” Rodriguez said. “And I look American. It’s not about ‘oh yeah, I’m from El Salvador’ and I’m very proud of that. But if I go there, they don’t see me as El Salvadoran, they see me as an American. And that in itself is what’s going to get me killed.”

TU Dreamers president Fatime-Zara Beri said she was with a group of friends after hearing the news that Trump had rescinded DACA. In that moment, she said she felt numb.

“It didn’t really hit me until I was alone in my room and it sunk in like, ‘Wow, he can really just delete all the hard work we’ve done in the past five years,’” Beri said.

“DREAMers” were named after the proposed DREAM (Development, Relief, and Education for Alien Minors) Act. The legislation was reintroduced on several occasions and would have provided a path to citizenship for undocumented immigrant minors, but Congress never passed the Act.

DACA recipients, often referred to as Dreamers, would be protected under the DREAM Act. But without the legislation — and with the recent rescission of DACA — would-be Dreamers will be left without legal protection allowing them to stay in the United States as of March 5, 2018.

Beri, a former Student Government Association senator, helped found the TU Dreamers this past spring to offer support and resources for undocumented students and allies amidst Trump’s dismissal of “sanctuary campuses.”

“I think as of right now, we just need to make sure everyone is okay emotionally,” she said. “That’s what I care most about…. Making sure that they’re fine and check[ing] up on their family and friends as well.”

According to Beri, TU Dreamers is currently working to secure a $5,000 scholarship for undocumented students. The private scholarship, which Beri said she worked on while she was part of SGA, would be distributed to students who are unable to qualify for federally-funded student financial aid such as FAFSA due to their status as undocumented immigrants.

Beri hopes to build the network among TU Dreamers and undocumented immigrant advocacy groups at other universities to foster a support system for undocumented students across Maryland.

“College Park has a really amazing undocumented resource group and we’re trying to collab with them and see if we could do it more local and possibly reach out to high schoolers or anyone in the Towson area,” she said.

Beri said she would also like to have the TU Dreamers do more outreach at the high school level to “let them know there is a future after high school.”

“I never thought college was an option for me and now here I am, so just giving them hope because they definitely need that,” she said.

Vice President of Inclusion and Institutional Equity Leah Cox is concerned about the effect that the DACA rescission will have on student recipients on campus.

“It is beyond painful and scary and upsetting because, as I said to [President Schatzel], this means that a number of our students can’t focus on their academics because they’re either worried about themselves or their parents or their family members,” Cox said.

In her Sept. 7 presidential address, Towson University President Kim Schatzel opposed Trump’s decision to rescind DACA, among other actions taken by the Trump administration such as the reduction of federal funding for climate change research and elimination of support for the National Endowment for the Arts.

That decision to rescind DACA will affect “almost 800,000 dreamers who signed on to a federal program in hopes that the place that they consider home since childhood will allow them to stay and contribute to its success while they realize their fullest potential,” Schatzel said.

Schatzel also released a statement on Sept. 5 in which she reiterated statements she made Dec. 8 and Jan. 29, and committed to supporting DACA recipients at Towson.

“We will continue to support all members of our community to the greatest extent possible within the law,” she said in the statement.

In November 2016, Schatzel joined more than 600 university leaders across the U.S. in signing the Pomona College Statement in support of DACA recipients.

Rodriguez commended Schatzel for both the content of her statement and the timely responsiveness with which it was sent out.

While Rodriguez said support for immigrants on campus is better than last year, she said it is still not enough. She hopes that more allies will actively use their privilege to advocate for DACA recipients and other vulnerable populations.

“It’s sad that people with privilege, despite their beliefs, if they are allies it’s sad that all they do is put a pin or put a hashtag and they don’t use that privilege of their voice to do more,” she said. “Because DACA people right now, there are probably more in the shadows, afraid to say anything.”

SGA wants to send the message that discrimination against Towson community members, documented or undocumented, will not be tolerated at Towson.

After the violence in Charlottesville in August, the SGA announced several commitments that they are developing to address hate and bias on campus, and to promote a culture of diversity and inclusion.

SGA President James Mileo said the SGA has begun their soft relaunch of #NotAtTU, Towson’s anti-hate crime/bias campaign, to incorporate #NotAtTU materials and discussions into other SGA events. The date of the hard relaunch is still being finalized.

“With #NotAtTU, we’re shifting the focus from ‘no, not here,” Mileo said. “It is here. How do we react as a community? … As much as we don’t want it to be here, it is because it’s everywhere.”

For Mileo, creating a campus that is “equitable, inclusive and judicious for all” is about more than mere isolated acts; it’s about ingraining those ideas into your long-term behavior.

In an effort to combat prejudice and hate on Towson’s campus, Beri urged people to use this time to educate themselves and others about the realities of the immigration system.

“Brush up on your skills with immigration as a whole,” she said. “There’s this misconception that it’s so easy to become a citizen, whereas that’s not the case at all. Just dismissing the rhetoric that ‘they’re stealing our jobs’ or that ‘they’re criminals.’ Just dismiss that from your vocabulary and become more informed about the immigration process.”

“The dialogues help because people will actually start talking about it,” she said. “People not addressing it in general is what causes the problems on campus because people are, in a sense, ignorant then.”

The fears that Rodriguez and other immigrant rights advocates are experiencing are what drive them to defend DACA and support her undocumented brothers and sisters.

And, Rodriguez isn’t taking “no” for an answer.

“Of course they’re going to say ‘Yeah, you did as much as you could. You have to let go at this point,’” Rodriguez said. “But how can we when it’s our life?”

The Towerlight will continue to update this story as the SGA makes progress on their commitments and as more information becomes available.

– Sarah Rowan contributed to this article.