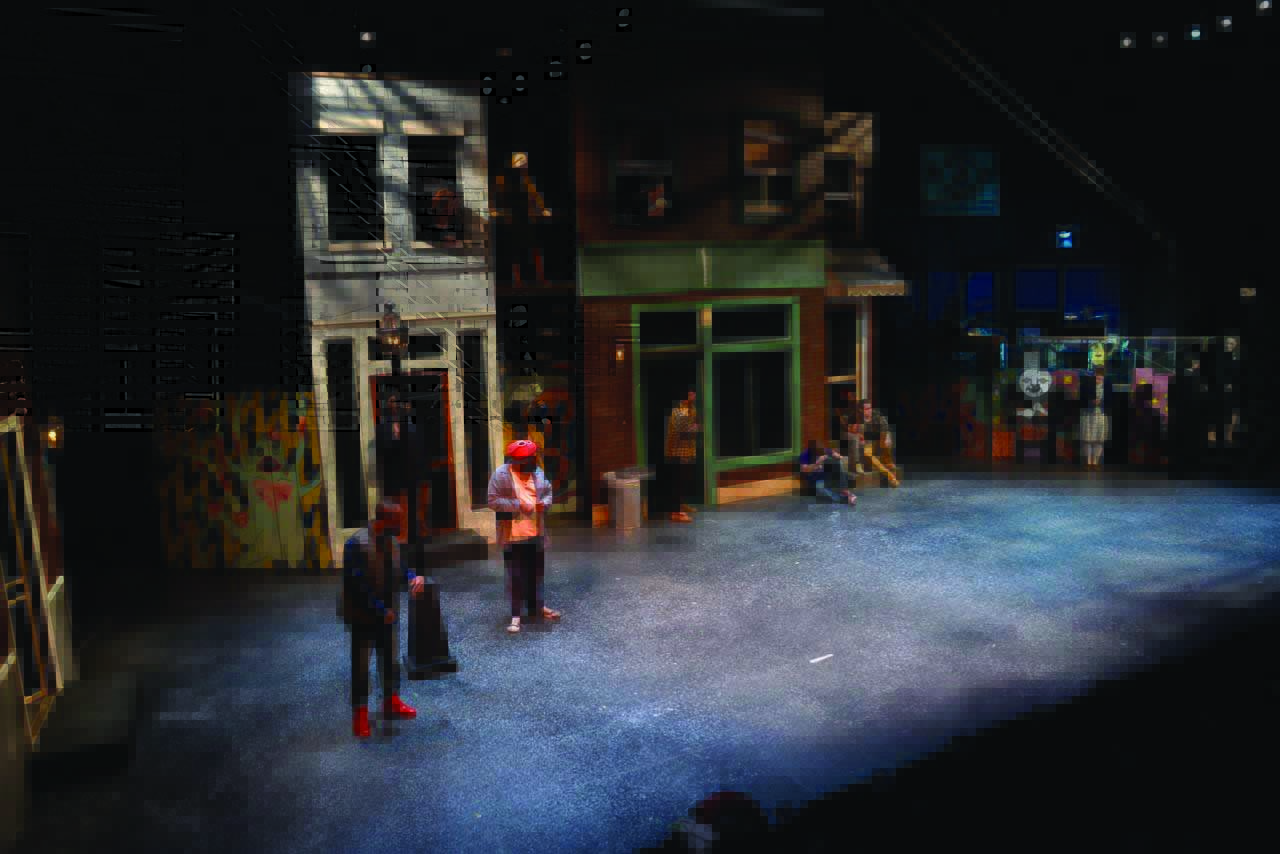 The cast and crew of “The Good Person of Setzuan” were excitedly running around preparing for their final dress rehearsal last Wednesday in the Studio Theatre of the Center for the Arts.

“Since the play dives into really current issues, we hope that students will be able to connect with the story,” acting and mass communication major, Jared Swain, said. “Maybe some of it will reflect something that hits home to them. Maybe they’ll just like the message. Either way means it was a successful show.”

Associate theater professor Stephen Nunns is directing the show, which runs until April 9. Tickets are $10 for Towson students, faculty and staff, $20 for general admission.

The show begins with various types of Baltimoreans sprinting, strolling and standing on stage. Everything from a homeless man selling water out of a beaten-up cooler, to hipsters on skateboards and a man running from the cops. Then, three gods appear on a seemingly impossible hunt to find a good human.

“I play god three, who is supposed to very closely relate to Bernie Sanders,” senior acting major and musical director Taylor Rieland said. “The other gods and I are searching for a kind and giving soul to put us up for the night, and it starts to seem like we might not find someone until we are introduced to Shen Te.”

Rieland, along with the other gods, plays multiple roles throughout the production, including both a prostitute and a priest.

“I’ve only ever been in one other play where I played multiple roles,” Rieland said. “This production has been more difficult than most of the others I’ve done. Having to play one role and then disconnect from that persona and then play someone else is tough. All of that plus being the musical director has been a lot of do, but I’m excited for people to see the end result.”

Senior acting major Allison Bradbury plays the roles of Mrs. Yang, Sun’s adoptive mother, god two and a young boy. She hopes that students will find a deeper interpretation of what it means to be a good person though “The Good Person of Setzuan.”

“After being introduced to Shen Te, we find out she’s a prostitute,” Bradbury said. “Since my god-character is modeled after Sarah Palin, she is almost immediately judgmental and assumes she can’t be a good person because she sells herself for money. I want people to understand that the world will condition you to think this way, this negatively. Challenge that. Don’t let society turn you into someone callous or selfish.”

After Shen Te, played by acting major Mani Yangilmau, agrees to house the three gods, they give her a loan to help her buy an apartment attached to a corner store.

While stocking her new smoke shop, a carpenter arrives to try to swindle her out of money.

Due to her good nature, Shen Te is consistently taken advantage of and manifests an alter ego named Shui Ta, who she claims is her “cousin.” He is far more aggressive than she, which allows Shen Te to fend and provide for herself.

With Yangilmau’s past acting experience in Towson productions such as “No Child,” “13 Clowns” and “Sweeney Todd,” she still says playing both Shen Te and Shui Ta were among her most challenging roles to date.

“Since I’m switching from male to female characters, the physicality between the two is the hardest for me to change,” Yangilmau said. “They have very different aspects to their personalities. Shui Ta displays a lot of brute masculinity, which can be hard to fully immerse in.”

At first, having Shui Ta around to reinforce Shen Te’s non-existent backbone seems beneficial. This is until his selfish and assertive demeanor leaves the community residents, who relied on Shen Te’s good nature, struggling and in need of guidance.

“I think what we want people to realize is that it is sometimes really hard to be a good person, and the world doesn’t always make it easy,” he said. “I grew up in Baltimore, so I know what growing up in that environment has the ability to do to people.”

With mentions of “HipHop Fish & Chicken” and “The Baltimore Sun,” “The Good Person of Setzuan” hints at popular Baltimore staples while also representing the positives and negatives of being too passive—and in the same vein, too assertive.

“Don’t judge people on their cover,” Vision said. “People form different aspects of themselves because of their experiences and their surroundings. Try to understand each other, but also never be afraid of the consequences of giving.”