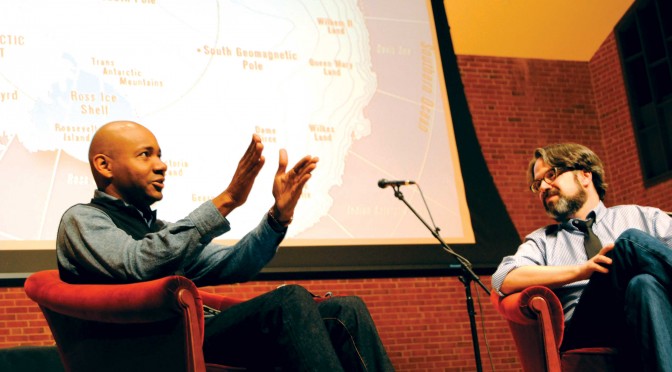 Composer and multimedia artist Paul Miller, aka DJ Spooky, talked about fusing mathematics and technology with the arts to express ideas and political issues Friday, during an on-campus speech in celebration of Towson’s 150th anniversary.

“[My work is] an investigation into the notions of thinking about creativity in the 21st century,” Miller said. “It’s the idea that music and arts are reflections of math and science.”

Miller also performed several compositions from his album, “Of Water and Ice,” with Towson University students. His work is a mixture of DJ remixes, classical music performed by violinists and the sound of ice in Antarctica that he captured on a trip there.

The music is meant to bring together the issue of climate change and ice melting with an urban setting that doesn’t experience its effects.
“I’ve made most of my projects open source, to precisely reflect that the place they’re coming from, which is Antarctica, the world’s creative commons,” he said.
Many of Miller’s compositions focus on finding the balance between math and the arts.

“When you see these traditional instruments and you see software, this is a very unique evening,” Miller said. “You’re talking about literature and composition, but you’re also talking about the potential of the collaboration between cultures and geographies and using digital media as a more cosmopolitan tool.”

“All is number,” he said. “So, what you’re just hearing was an equation that had been made into a composition; a composition that had been turned into elements that were rhythmic.”
Miller recently published “The Imaginary App,” a book that explores how apps have shaped and influenced not only technology but culture as well.

“We create a space of intentionality, and I think that’s one of the most powerful things of the 21st century. That there isn’t anything you cannot imagine right now,” Miller said. “What I’m doing tonight is opening up some of the issues that I view as part of this inquiry, into looking at not only design, but how apps change our mobile sense of place and creativity.”
Miller also touched on the idea of fusing the classical and the contemporary.

“It’s really important to me to have people start thinking about not just beats as a kind of party thing, but as something people can think of as a backbone for contemporary classical,” Miller said. “It’s not just electronic music and it’s not just classical music, but it’s a conversation between the two that makes it a powerful situation.”
TU Vice Provost Maggie Reitz said that she liked the interconnected nature of Miller’s ideas.

“I enjoyed the mixture of sounds and the connection with mathematics, history lessons and current political issues,” she said.

Miller said that he looks forward to what the future of music, arts and mathematics can all bring to the table when combined.

“The concert is a reflection of potential,” Miller said. “Potential for instruments to be putting conversation with contemporary which is digital software based. So for me that’s a really important step because people separate everything, and I want to pull them all together into a conversation that shows the contemporary composer.”

A visiting scholar at University of Colorado, Boulder, Miller has visited Towson during the past academic year and has enjoyed working with the students and mixing electronic and classical sounds.

“The students played my compositions tonight and I just found it a very heartwarming situation,” Miller said. “They are just very young, bright-eyed, and full of inquiry about how to combine electronic music with classical music.” 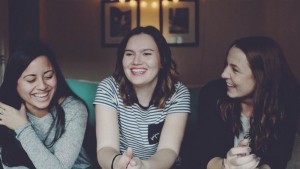 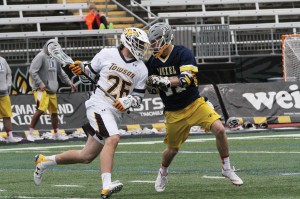 Next post Towson defeats Drexel at Unitas
Editor in Chief