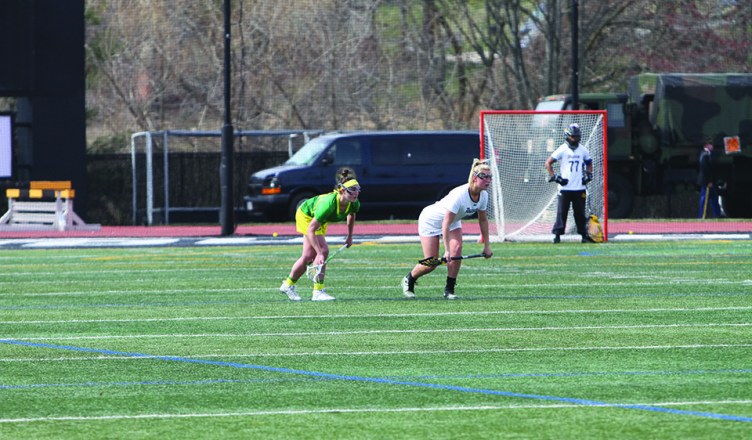 The Tigers were hot coming into the game, winning four straight contests. Head Coach Sonia LaMonica emphasized the intensity of this rivalry game before the opening whistle.

“This is a great rivalry and there have been a lot of back and forth battles between these two teams,” LaMonica said.

Sophomore attacker Natalie Sulmonte scored the first goal of the game when she found the back of the net at 27:49. However, The Dukes won the ensuing draw and scored just 13 seconds later to tie the game 1-1.

James Madison’s first goal sparked a big run, and the team took a 7-1 lead over Towson into the intermission.

The Tigers responded early in the second half when junior midfielder Kaitlyn Montalbano scored her 17th goal of the season at 24:35.

However, James Madison scored two of the next three goals and led 9-3 with 19:28 to play in the game.

Towson struck twice more when Sulmonte scored her 28th of the season, and freshman midfielder Shelby Stack scored on a free position shot with 6:20 left on the clock.

Neither team scored in the final six minutes, and James Madison held on for the 9-5 win.

LaMonica stressed the significance of staying locked in defensively to prevent scoring bursts in future competition.

Freshman defender Olivia Conti had a pair of caused turnovers raising her season total to 27. That moved Conti into the top 10 for single-season caused turnovers at Towson, making her the second freshman to get onto that list.

Despite the loss, LaMonica stresses that the Tigers need to stick to what has been working for them and not panic as they head into the stretch of their CAA schedule.

“We have different strengths and weaknesses so we want to play to our strengths and keep doing what we’ve been doing well,” LaMonica said. “I think it’s just important that we stick to our gameplan and we don’t need to divert too much off.”

Towson will return to action Friday, April 7, when the Tigers host William & Mary at 7 p.m at Johnny Unitas Stadium.