As you know, feminism is a worldwide movement. And while feminism is very much needed in America, there are other countries in which women are facing even more difficult circumstances than we often do here.

For example, in India, women are still being set on fire over dowries.

Women are still being executed at birth, domestically abused, trafficked and forced to face overall discrimination, according to reports from the BBC.

So what is being done to fix these injustices?

In 2006, Sampat Pal Devi officially created the Gulabi Gang in India, known for their iconic hot-pink saris. Devi created the gang after she witnessed a man beating his wife.

When she begged him to stop, he began to beat her as well. And what did Devi do about this? The next day, her and five other women came back to the man’s home and began beating him with bamboo sticks.

As news of this courageous act spread, more and more women began coming to Devi for help with their own similar situations. Thus, the Gulabi Gang was born.

These badass women aim to empower and save women from facing the horrendous types of mistreatment that they unfortunately often do. They gather in groups to help women recognize their own skills and eventually help them become able to support themselves. And, of course, they’ll still give you a good ass-whoopin’ with their sticks if you’re caught abusing your wife.

Don’t you just love that?

In order to help create jobs for women, the Gulabi Gang has delved into the wedding services provided in India.
Weddings are often very cultural and elaborate, and require much planning and effort.

Tapping into this industry has helped create many jobs for Indian women.

What these women are doing is incredibly important, to say the least.

This is dangerous work for them. India, like America, is run by a patriarchy. Powerful women are often stifled at first sight.

But not these women.

The Gulabi Gang is growing each day, and they will not be silenced.

If you wish to learn more about this magnificent gang of strong women, you can go to www.gulapigang.in.

They have information about their history, goals, and projects. You can also opt to become a member and donate to the group and help support the women of India.

At the very least, I suggest you look up pictures of these wonder women.

No one else pulls off pink quite like they do. 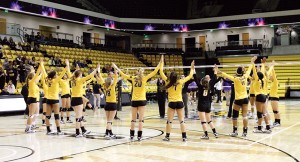