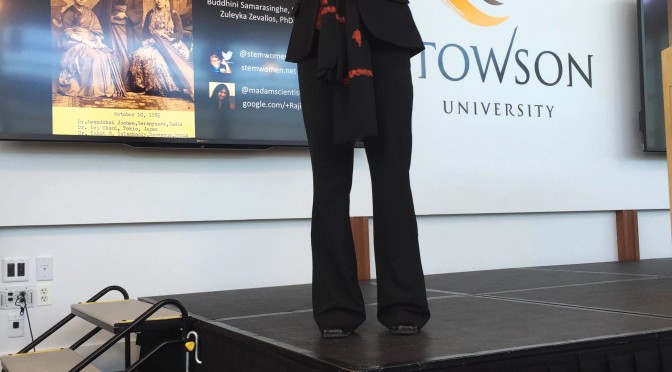 The Fisher College of Science and Mathematics welcomed over 100 Towson-area students and educators to campus Saturday for the 15th annual Women in Science Forum, where speakers used their experiences as female scientists to encourage young women to pursue careers in STEM.

Major General Linda Singh, the adjutant general of Maryland for the Maryland Military Department, spoke about, “A Different View: Living Through Adversity.”

While Singh has a background in business, she works in systems engineering and logistics within the National Guard. According to Gasparich, she will be working with Towson computer science faculty within the field of cybersecurity to spearhead and develop a cybersecurity center in Baltimore.

Rao is committed to mentoring women and minorities, and co-founded a blog called “STEM Women” to break down some of the stereotypes associated with women scientists.

“We need to educate people about stereotype threat and its negative consequences,” Rao said.

University of Delaware associate professor and Environmental Science and Studies Director Dana Veron spoke on “The Climate is Changing…Now What?”

Veron spoke on her career as an expert in climate control and climate change. She has worked on a grant with MADE CLEAR, the Maryland and Delaware Climate Change Education Assessment and Research, which aims to build partnerships and communication among research universities within the subject of climate change.

“If you think about your career, whether you’re applying to be a doctor…and even if you’re a business major, you need to expand your horizons,” Singh said. “Step into the world of STEM and don’t be afraid. Young ladies, there’s not enough of us in the field.”

The forum also cited labor statistics to show the gender inequity within STEM fields. According to a slide presenting data from the U.S. Census Bureau American Community Survey, while women held 48 percent of all jobs in 2009, they only held 24 percent of STEM jobs.

According to data collected by Towson University, there were over 300 more women enrolled than men enrolled in the Fisher College of Science and Mathematics in 2015. The 2015 numbers offer a stark contrast to the numbers from 2001, when 951 men were enrolled compared to 761 women.

In addition, a 2009 Program for International Student Assessment (PISA) report that analyzed over one million students over the past 100 years showed that female students outperform male students in all school subjects.

The speakers described a need for women in science in order to increase diversity of thought within STEM fields.

“Without the diversity of thought and diversity of input, we really cannot move our overall agenda forward,” Singh said. “We can’t move forward as a nation. So, it is critical that we have more of you at a younger age getting into STEM fields.”

According to Gasparich, the forum has been beneficial for women representation within Towson faculty.

“We have a lot of women faculty now, but we’re trying to focus in on underrepresented minorities, because we don’t have a lot of faculty from a diverse group,” she said.

The event will continue next year, but will be taken over by faculty within the biology department, as Gasparich is moving on to a deanship at Salem State University in Massachusetts.

During the forum, Provost and Vice President for Academic Affairs Timothy Chandler said that, “It’s still not easy for women in science.”

“We have to do everything we can at institutions like this to try to make it possible for women to live a full life, to be scientists and researchers and to be supportive of those efforts,” Chandler said. 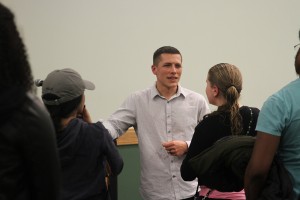