Eighteen-year-old freshman Muhammad Waheed gets ready before for class every morning in Richmond Hall. He makes his way to the bathroom to brush his teeth, but struggles to get the right amount of toothpaste on his toothbrush.

Along with the challenges of being a college freshman, Waheed is legally blind. He has no vision out of his left eye and minimum function in his right. However, he does not let his impairment slow him down.

“I am an expert on certain skills,” Waheed said. “I just haven’t mastered some yet. I use different tactics for different tasks. I use cues and draw from my other senses.”

Due to his visual impairment, Waheed faces obstacles in the classroom and with homework. He uses a special laptop to help him take notes in class and relies heavily on audio technology to help him with his assigned readings for homework. However, Waheed does not let his disability get in the way of his academic performance.

“I taught Muhammad at Perry Hall High School,” Perry Hall high school teacher Scott Roller said. “He was an excellent student. He let you know when he needed clarification on something or didn’t understand something. He seems to be thriving [at] Towson.”

Although Waheed faces adversity day in and day out, he has found a sanctuary by playing goalball, a Paralympic sport created for those who are visually impaired where teams of three try to score on their opponents’ goal. 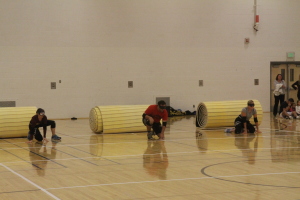 Teams can score by rolling the ball down the court into their opponent’s goal. The team that doesn’t have the ball has to rely on their hearing to defend their goal.

They rely on their hearing by listening to the bells as the ball approaches their goal and can listen to their teammates tapping the court.

Initially, Waheed did not like the idea of playing goalball. He wanted to compete in track and field in high school but was told he didn’t look athletic enough. It wasn’t until he attended the Maryland School for the Blind that he fell in love with the game, in large part to coach Matt Mescall.

“It’s because of people like Mr. Matt that I love this game,” Waheed said. “When you see the intensity from your coach, you want to give that same intensity in the game.”

Mescall has always enjoyed working with Waheed and speaks highly of his character both on and off the court.

“Muhammad is a very passionate person,” Mescall said. “He understands that the game is bigger than just him. He is a great advocate for the game and he is an excellent and outstanding person.”

Waheed has become so passionate about the sport that he has recently introduced it to Towson.

He worked with Disability Support Services and Campus Rec to organize a goalball tournament in Burdick Gym on Friday.

“We felt like we were at a legitimate goalball tournament,” Waheed said. “Nobody felt like beginners. The referees were awesome, even Mr. Matt came up to me and said something about it.”

Waheed will continue to work with Campus Rec and hopes to create one of the few goalball teams in the country that will travel to play against other teams.

“I used to have a routine in high school,” Waheed said. “My routine was get up, go to school and come home and do homework. When I found goalball it gave me that escape that I needed to prevent burnout. I once had to listen to six hours worth of audio recording for class. You want to know how important goalball is to me, well there you go.”