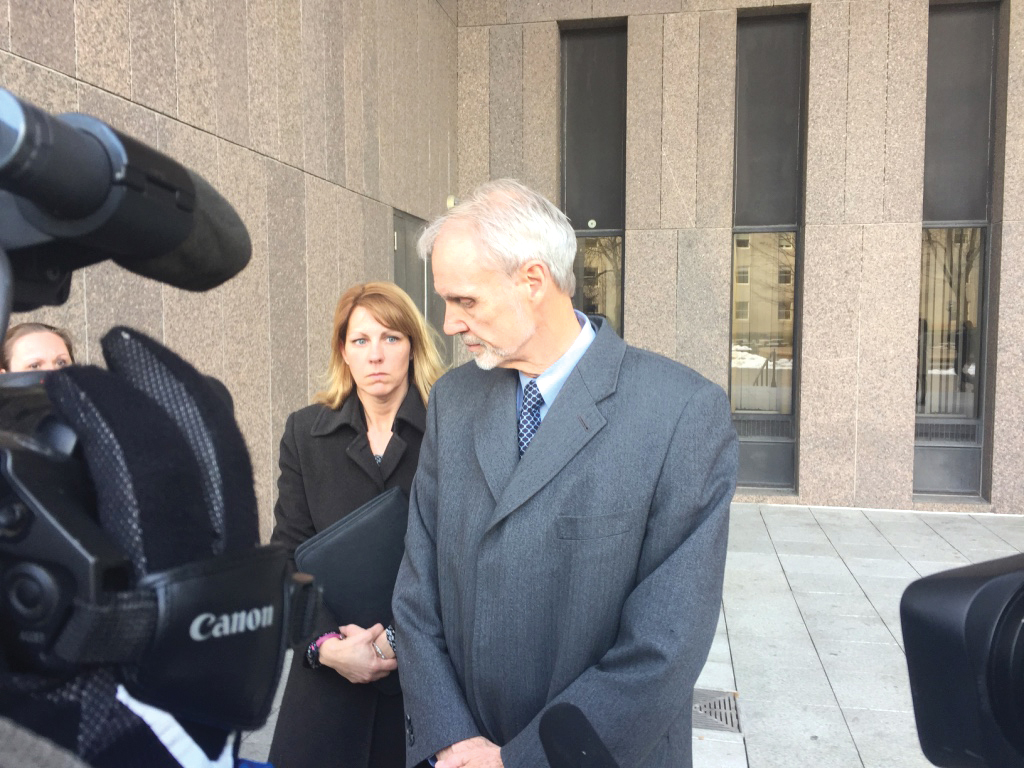 Former Towson diving coach Maureen Mead was sentenced to three years of unsupervised probation before judgment Wednesday, in connection with the smartphone found recording students in the women’s swimming and diving team locker room in October.

Mead, who pleaded guilty to misdemeanor charges of visual surveillance and altering physical evidence, was fired from her position at the University on Nov. 24, just one day after she was formally charged in connection with the Oct. 16 incident. The state prosecution dropped an additional interception of communication felony charge.

“I would like to say how very, very sorry I am to the girls and this team,” Mead said.

Assistant State’s Attorney Lisa Dever said that she did not pursue a full trial because she didn’t want to subject the women on the team to the stress of cross-examination and a drawn out process. Dever also said that Mead had no prior offenses and that, because the laws related to her charges are not clear cut, there was a strategic reason for going for a plea instead of a full trial.

During the plea hearing, Dever called seven women from the team to provide victim impact statements.

“This way [the swim team] got to say everything they wanted to say,” Dever said. “And that’s what they wanted, and what we accomplished.”

As part of the probation, Judge Jan Marshall Alexander ordered Mead, 43, to have no contact with members of the team, to stay away from campus and to not coach or train in any capacity. If Mead successfully completes her probation, criminal charges will be removed from her record.

Swim team member Hannah Snyder said many members of the team were disappointed with Alexander’s decision. They didn’t want her to be able to coach again in the future, she said.

During the hearing, Dever gave the first public account of what happened inside the women’s swim team locker room Oct. 16.

Dever said that none of the women on the team believed that Maureen Mead was trying to record them undressing, but instead that she was likely trying to eavesdrop on their conversations. Swim team coaching staff suspected that there were disagreements between upperclassmen and freshmen members of the team and that some members were trying to sabotage recruitment.

At around 7:30 a.m. on Oct. 16, just after the team had finished morning practice, the women noticed a light reflecting from the back of Mead’s black locker. Upon investigating, they found an iPhone standing upright against a shampoo bottle, partially obscured in front by a knit hat.

When she picked up the phone, 19-year-old Kendall Krumenaker saw that it was recording and had captured at least two women in the act of changing. When other women on the team informed Assistant Coach Adrienne Phillips of the device, Phillips returned the phone to Mead, who acted as if she had lost it.

Snyder later consulted former Head Swim Coach Pat Mead, Maureen Mead’s husband, who downplayed the incident and attempted to assure her that nothing was recorded, according to Dever’s account.

The coaches “didn’t understand why the girls were making such a big deal,” Dever said.

None of the coaches contacted Towson University Police, who were only made aware of the situation after the mother of a team member contacted University administration. TUPD then responded at 11:10 a.m., almost four hours after the incident, and seized the phone. An investigation showed that the phone had undergone a factory reset around 9 a.m., Dever said.

“[The team] trusted their coaches to lead them in the right direction and these coaches did anything but that,” Dever said.

Phillips and Pat Mead both quietly resigned in December.

According to Dever’s account, Pat Mead met with Phillips off-campus and recommended that Phillips do a factory reset of her iPhone, and told Phillips that he and Maureen Mead had already reset their phones and tablets.

Maureen Mead’s attorney, David Irwin, did not offer any corrections or objections to Dever’s account of events.

Dever said that Phillips and Pat Mead were not charged in connection with the incident due to lack of evidence.

“We looked into everything,” Dever said. “We weren’t limited in who we could charge. If there was evidence against anyone else, we would have charged.”

In their victim impact statements, women from the team described feelings of paranoia, anxiety and depression they have developed since finding the phone in the locker room.

A few said that they experienced identity crises, because they no longer enjoyed swimming, being in the pool or going to practice.

“The family I had once been so proud to be a part of was shattered,” Krumenacher said.

“For the first time in 15 years, I was ashamed to be a swimmer,” Snyder said.

Two women said that the stress from Mead’s breach in trust contributed to other physical ailments like stomach ulcers and mono, while another described not wanting to do anything aside from sleep and stay in bed. One woman talked about bursting into tears during class without any provocation, because of the incident.

The University began offering Counseling Center services for the women immediately following the Oct. 16 incident and a counselor attended this week’s plea hearing.

Two members of the team have transferred from Towson since the phone was discovered, according to another swim team member.

Towson Athletics would not confirm the number of students who transferred from the University, citing the Family Educational Rights and Privacy Act.

After the team gave their testimony, Mead spoke briefly. She apologized to the team and explained that she has not been able to find a new job due to the charges against her. The Meads have four kids, all under 15 years old.

“I just want to be able to provide for my kids, and I can’t do that right now,” she said.

Even though the trial is over in court, Mead may still be facing sanctions from USA Swimming, the governing body of the sport, according to her defense attorney.

USA Swimming Director of Communications Scott Leightman said that he could not comment on any specific sanctions or actions being taken by the organization, but did say that USA Swimming does pursue such proceedings.