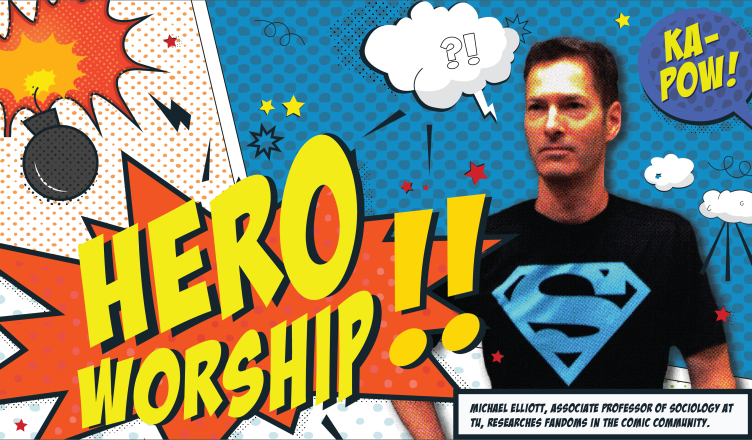 Michael Elliott, associate professor of sociology at Towson University, remembers going through the grocery store checkout lines as a child in his then small and quiet hometown in Silicon Valley. Elliott would see the rotating kiosks filled with comic books and ask his mother if he could have one.

“There was Spider-Man, there was the Justice League cartoons and others,” Elliott said. “I think there was X-Man at some point. There was stuff on TV, too. I watched the cartoons, I read the comic books when I was young.”

Combining his love of comics and sociological theory, Elliott is currently tackling a research project regarding fandoms in the comic community. His project, based on a theory by French sociologist Émile Durkheim, posits that fandoms can be a form of religion.

Elliott began his research at the Sept. 23 Baltimore Comic-Con, where he surveyed fans in attendance about their allegiances. In addition to creating survey questions that made sense to others, he had to reserve space at the Baltimore Convention Center, get advertising and, “pull everything else together,” a process that took him about nine months.

Elliott believes that the Baltimore Comic-Con was a good place to begin his research because of the way it is constructed.

“The [Baltimore Comic] Con is considered on the smaller end. It’s considered unique,” Elliott said. “They like to see themselves really focused on comics. San Diego, for example, has become so big, New York, too, that some people argue it’s too much focused on Hollywood. I think they feel like, ‘Hey, this was our thing originally, now Hollywood has taken it over.’ So Baltimore is very much focused on comics. It’s smaller and some people describe it as more mellow.”

Elliott is still in the beginning stages of his project, which he said will take years to complete. But Honors College Coordinator Abram Fox, who teaches an upper-level honors seminar about the aesthetics of comics, said that Elliott is “pushing boundaries” because comics are something that are usually taught from a literary perspective.

Fox also believes that Elliott is “onto something” with his research. He noted that in the 1950s, the United States government blamed juvenile delinquency on comic books, and that psychiatrist Fredric Wertham wrote a book called “Seduction of the Innocent” to shine a light on the way comic books were corrupting the youth of the country.

“I think that the path [Elliott] is exploring could provide some very fruitful information,” Fox said. “There seems to be enough of a connection that it’s really worth exploring.”

Fox isn’t the only person at the University who supports Elliott’s research.

“Dr. Elliott’s project struck the faculty research committee as creative and intriguing, and his project is well within the scholarly scope that characterizes his discipline and his colleagues,” Cooney said in an email. “Dr. Elliott has had a history of making interesting connections and testing sociological theories in imaginative ways.”

Comic books have had a long history of being studied in the academic setting. In fact, there are multiple courses at Towson being taught with, or around, comic books and superheros.

In addition to the honors seminar that Fox teaches are classes in the electronic media and film department and the English department that feature comic books and superheroes as part of the curriculum.

“Your academic training can be applied to realms that haven’t had as much attention as others,” Fox said. “Dr. Elliott is taking sociological theory and applying it to a new area of study.”

Kaitlynn Gooding, a senior English major at TU, is one of the many students enrolled in a course that uses a comic book for academics. Gooding didn’t enroll in the class for the sole purpose of the comic book aspect, but she can still see the value in Elliott’s research.

“Outside of class, I know people that really love to read comics,” Gooding said. “That is what they prefer over a typical novel.”

Junior electronic media and film major Ryan Permison is one of those students who loves reading graphic novels and comic books. Permison said his passion for the comic community started a little over a year ago when one of his friends took him into Third Eye Comics in Annapolis, Maryland.

“It was Batman Day, 2016,” Permison said. “We went in [the store] and they bought some stuff, I bought a thing or two and they gave me some free comics if you buy something. I took them all home and sat down, opened them up and I read them, and from then on I said ‘you know what, this actually pretty good. I think I want to read more of this stuff.’ So then it just kind of snowballed after that. I have some books I have gotten signed by writers and they are packed and sealed to preserve them.”

Permison’s love for comics began to stem so deeply that he attended his first comic-con in Myrtle Beach, South Carolina. He later attended a con in Lexington, Kentucky, and has been to several more. Permison described the comic-con community as a family.

“I’ve been able to make several friends through attending these comic-cons,” Permison said. “It isn’t easy coming off that cloud nine of comic-cons, because once it’s over it’s like ‘I don’t want to go back home. Honestly I’d rather just stay in this convention center and a hotel nearby and just hang out with my friends all day.’”

Eventually, Elliott wants to dive deeper into his research. He hopes to go from surveying comic-con goers, to embedding himself into a group of fans to “paint a rich picture” of their experiences whether it be at cons, or in everyday life.

Although Elliott said he will need to continue to find the time and the funds for his research, his love of sociological theory, comics and comic fandoms continues to drive him.

“The original inspiration of the research is sociology and sociological theory, but the fact that I did read comics and I do enjoy them also makes the research more fun,” he said. “I’m wondering if there is something really deeply meaningful and sacred about it and that’s why they became and remain devoted fans.”