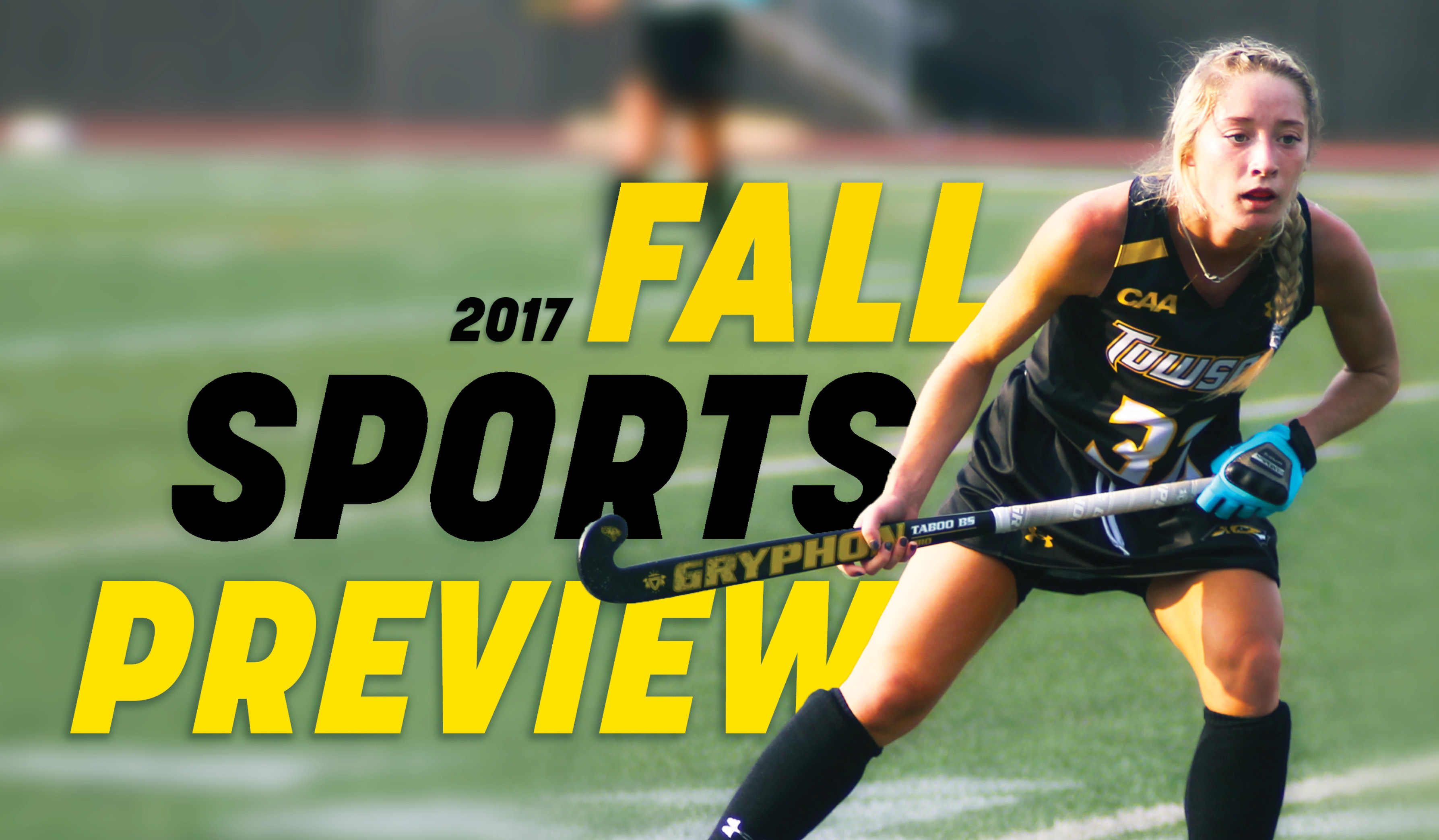 The fall 2017 sports preview is designed to give you a first look at the sports that Towson Athletics has lined up for the season.  Check it out below for a comprehensive picture of what’s to come.

Last year, Towson finished with a 4-7 record, winning three straight games to close out the season. The team is looking to build off that late season surge and improve its record.

The Tigers open their 2017 season at Johnny Unitas Stadium for the first time since 2014 against crosstown rival Morgan State.

“The last couple years I swear we’ve coined the term ‘road warrior,’  Head Coach Rob Ambrose said. “It’s good to start at home, especially this time of year. It will be a great weekend for everybody. I’m looking forward to seeing the student section packed and noisy as hell.”

When redshirt junior quarterback Morgan Mahalak took snaps under center last season, Towson won all of its Colonial Athletic Association (CAA) games. But, when Mahalak was sidelined with an injury to his throwing shoulder, the team did not win any conference contests.

“That statistic alone says a lot,” Ambrose said. “Theoretically, when [Mahalak] finishes the game, we win. We need to make sure that he finished all of them.”

Mahalak played well in his first season with Towson after transferring from Oregon. He finished the season with 890 yards and four touchdowns.

The Towson offense will lean heavily on the rushing attack led by sophomore running back Shane Simpson. He will replace running back Darius Victor, who signed as an undrafted free-agent with the New Orleans Saints.

Last year, Simpson finished with 784 rushing yards and three touchdowns. He also provided a spark to the Tigers’ special teams unit. He compiled 915 yards on 34 kickoffs last season, including a 100-yard kickoff return for a touchdown.

On the defensive side of the football, Towson is led by an experienced defensive line and a speedy secondary.

Seniors D’Sean Cummings, Clifton Jones and Kanyia Anderson, along with junior Zain Harps Upshur will carry the load on the defensive line. Sophomore linebacker Malik Tyne is a versatile player who can be used on blitz packages to help the pass rush as well.

The captain of the secondary is junior safety Monty Fenner, who finished last year with a CAA-leading four forced fumbles.

Towson returns sophomore Justice Pettus-Dixon and junior Lyrics Klugh at the outside cornerback spots to provide experience to the younger defensive backs.

Despite a disappointing record last year, the Tigers’ expect to have a bounceback 2017 campaign if they can stay healthy and build off of their close contests from last season.

“There’s a chip on my shoulder, there’s a chip on their shoulder and there ought to be a chip on every person who wears a Towson T-shirt when they walk in the stadium,” Ambrose said. “It’s about getting our respect back.”

Under the new leadership of head coach Mike Larkin, Towson has high aspirations for the season.

“My main goal in my first season as head coach is to do whatever I can to put the guys in the best position to win the Colonial Athletic Association Conference Championship in April,” Larkin said. “That would advance us to the NCAA Championship, and that’s my ultimate goal for the team.”

Larkin expressed belief in his young players and hopes to unlock their potential this season.

“They’re all talented golfers, and their good shots are as good as anybody else’s,” Larkin said. “When they’re hitting their good shots they can compete with anybody, so my job is to help them learn to do that more often.”

“For me in my first event as the head coach, I’ll be learning a lot about how they compete and using what they do up in New York as a starting point for how I can help them each individually,” Larkin said. As they each push forward individually our team goals will take care of themselves.”

Towson has five freshmen on the roster, but Larkin believes they are prepared for the season ahead.

“They’ve all done this for a long time and have been preparing for this, so they’re ready to tee it up and compete at a high level.”

Towson is primed for a strong fall campaign. The team will participate in five invitational and regional tournaments over the coming months.

Jamie Peterson returns for his first season as the team’s full-time head coach after serving as the interim head coach last season and a part-time assistant coach the two previous seasons.

“The University has made a commitment to me running their program, and that excites and invigorates me,” Peterson said. “It allows me to bring more to the women’s tennis program.”

The team’s 10-player roster features five seniors, including A.J. Gomer and Renate van Oorschodt. The were named Second Team All-CAA as doubles partners and were the first doubles team to earn post-season honors in program history.

Towson’s fall season kicks off with two tournaments in one weekend. The team’s five seniors head to the University of Maryland, College Park, for the 2017 Bedford Cup Mid-Atlantic Division I Championships.

The other five athletes will host the Tiger Fall Classic at the Towson Center Courts. Both three-day tournaments take place Sept. 15-17.

Towson will later travel to the United States Naval Academy for the Blue & Gold Invitational at the Brigade Sports Complex in Annapolis, Maryland. The invitational runs from Oct. 6-8.

“We’re just doing less this fall in terms of tournaments,” Peterson said. “We’re using the fall on game improvement and practice time to be more improved in the spring.”

The Tigers’ have many young players on their roster this year and will lean on the experienced veterans to guide the team.

Head Coach Don Metil is entering his fifth season with the program and has high expectations for his older players to make a positive impact on the younger student-athletes.

“We will need to rely on our strong right side and leadership from those who have played in our system before,” Metil said.

Leading the way for Towson on the right-side is junior Jocelyn Kulian and senior Julymar Otero. Kulian was named the Colonial Athletic Association (CAA) Preseason Player of the Year.

The glaring hole for Towson lies in middle of the court, which includes three of six new faces to the program.

“We are not as polished as I would like for a team entering the season,” Metil said. “We are young throughout and it shows. We will have tests upcoming in teams such as Appalachian State and Virginia that will truly show us how our team stacks up against other teams.”

While the Tigers’ will go through growing pains this year, they are motivated by their low preseason ranking.

“We were picked to finish fourth in the CAA in preseason polls and feel we can do that or better,” Metil said. “We will be tested this weekend as we will be playing ranked teams and will truly gauge how far along we are, but as of now we feel as a run at the postseason is possible.”

After securing three victories to open up the season, The Tigers return to action on Sept. 1-2 for the Appalachian Invitational where they will face Appalachian State, Virginia, and East Tennessee State.

With the 2017 campaign already started, Towson looks to improve upon last season’s 2-17 record under the new leadership of Head Coach E.A. Jackson.

Jackson served as head coach at Eastern Mennonite for two seasons before taking over the Towson program.

Towson fell in its season opener 9-0 in Piscataway, New Jersey, at the hands of Rutgers. The team then returned home for its home opener against Longwood, but fell 1-0.

“All of the team is shifting the paradigm of not winning games,” Jackson said. “We are working every day to show continuous improvement.”

The team kicks off CAA play against Northeastern at Johnny Unitas Stadium on Tuesday, Sept. 29.

The Tigers’ have 13 newcomers on the roster this year, but return key starters from last season, including senior goalkeeper Emilee Woodall who recorded a CAA-leading 165 saves.

“They’re young and bring really great positivity,” Jackson said. “We have phenomenal returns who set the tone and lead by example.”

Towson looks to secure its first win of the season as the team takes on Lock Haven Friday Sept. 1, at Johnny Unitas Stadium. The game is set to begin at 7 p.m.

“We want to show continuous improvement,” Jackson said. “We are working everyday to achieve small games.”

The 2017 season brings new challenges to Towson as the team looks to replace both of its leading goal scorers.

The Tigers are focused on playing an entire 90 minutes this season in order to improve on last year’s 6-12 record.

“We need to play a complete game; we need to compete for two halves every game,” Head Coach Greg Paynter said. “We need to start playing full games early so that we’re ready for the conference schedule.”

The conference schedule is significant to Towson. Winning games against CAA opponents will help the team accomplish its ultimate task.

“The goal of this season is the same as any other — we want to play in the CAA tournament,” Paynter said.

Redshirt senior goalkeeper Taylor Sebolao also has Conference Tournament aspirations. She thinks the team has all the tools to accomplish its goals.

“We have a really experienced back line and midfield and I think we’ll be prepared for the CAA schedule this year.” Sebolao said.

Towson is preparing for the the fall season with a new leader at the helm of the ship, but will look to build on a strong performance from last spring.

Ferrero takes over a team that finished fifth in last season’s Colonial Athletic Association (CAA) Championships. It was the best finish in the organization’s history.

The Tigers’ roster has balance of experience and youth, consisting of two freshmen, two sophomores, two juniors and one senior.

Towson will compete at the Pirate Collegiate Classic in Greenville, North Carolina, on Sept. 25 and Sept. 26.

The TIgers will also take part in three events in October, starting with the Pinehurst Challenge on Oct. 9-10  in Charleston, South Carolina.

Towson’s next competition is on Oct. 21-22 at the Blue Lady Hen Invitational in Newark, Delaware.

The final competition of October and the fall season comes in Tampa, Florida, on Oct. 30-31 at the USF Invitational.

The team looks to improve upon last year’s performance in its five-tournament season this fall. 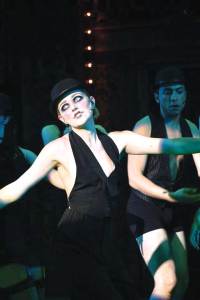