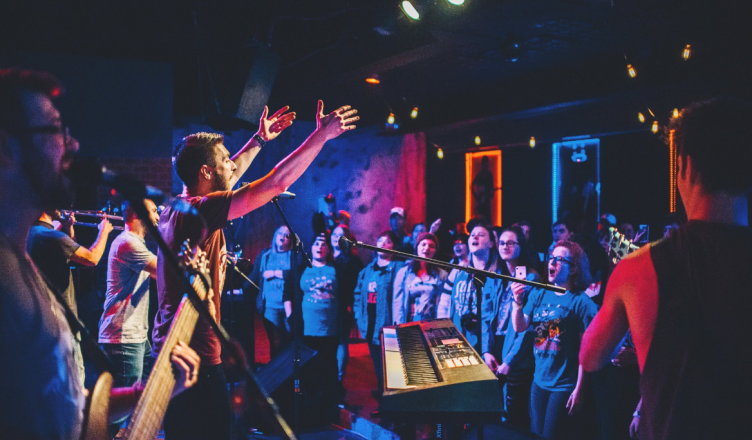 2007 was the year Stacked Like Pancakes, a band known for its strong sound and brassy undertones, was born.

The Baltimore native band is family to Kellen McKay, who balances between being the songwriter and lead vocalist of the group (in addition to playing rhythm guitar, keyboard, and percussion for the band), bass-trombonist  Zach Foote, Alec Leventis on trumpet, lead guitarist Michael Busch, trombonist Andy Dawson, Kevin Goren on drums and bass guitarist Will Lopez (who also sings backing vocals).

With most members having come from Towson University, the band’s overall enthusiasm about the institution was just as positively unique as the band’s name, a name chosen complete at random.

“There was very little effort put into it,” McKay shared about the origin of the band’s title. “There is no meaning behind it. We wanted something that could be easily changed, like when a crowd wants an encore they would say ‘SLP. SLP.’”

The band, which was inspired by artists like Streetlight Manifesto and Reel Big Fish, debuted its first album in 2011, titled “We’re Not Insane.” At that point, McKay knew he wanted the band to develop its own niche and unique sound, and within a year, Stacked Like Pancakes began performing at niche music festivals, like Towson’s Tigerfest.

McKay expressed the band’s style of music as “Brass Rock” or “Foo Fighters with horns,” since the brass instruments in their songs are easily identifiable. When it comes to the band’s musical process, McKay doesn’t share the songs with the rest of the band until it is “90 percent complete.”

“[There is] no one method, it would just start from one nugget of an idea,” McKay admitted about his songwriting process. “The songs are better for it.”

According to Lopez, fans of SLP are nicknamed “Pancake Nation.” Lopez shared that some fans were so enthusiastic to the point of helping the band find points of rest when working.

“The most awesome thing a fan had done is hook us up with places to stay,” Lopez said.

Lopez said that the band has many volunteers who are “absolutely incredible” and added that he “loves it.”

Both Lopez and McKay would agree that they would the band-life is something they wouldn’t want to escape.

“I don’t know what the hell else I would do,” McKay said. “Down the road, I would want to be a producer for another artist.”

When the band is not on the road, performing in places like Chicago or San Diego, they can be found at a local brewery.

“We love local beers,” said McKay. “There are a lot of great breweries all around.”

“[We always like to] check out the area we are in,” Lopez said. “I love to travel. I love seeing the sculptures all around.”

The members burst with appreciation for their supporters, sharing how the amount of love they have received is beyond anything they could have dreamed of.

“Thank you so much for saying hi; for showing up to concerts buying merch; donating to our kickstarter,” Lopez said when asked what message he would like to leave for his supporters. “It means so much. We have such incredible fans.”

The band’s third studio album, “Strange Creatures”, is available for pre-order now, and is set to be released later this year.