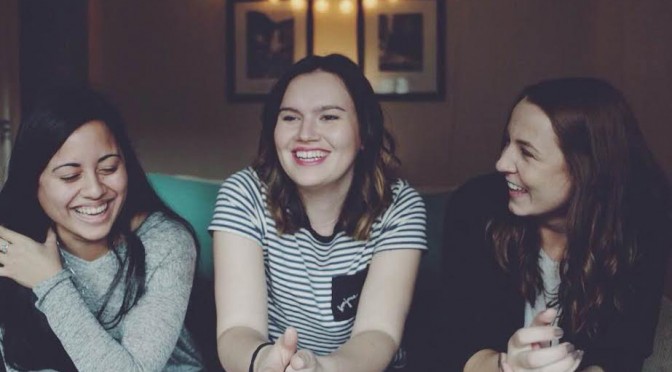 As Towson’s first all-female thesis film group, senior EMF majors Bethany Michalski, Aimee Schubert and Yasmin Zellipour are preparing for an endeavor that includes filming outside of the Baltimore area, and hiring a diverse crew of students with a wide range of set experience.

“We’ve been reaching out to younger people in the major that haven’t necessarily been on set, women that haven’t been represented in these male-dominated roles on set,” Michalski said.

It is important to the group enrolled in Film III to give people who are often marginalized in the industry the chance to work on their production, a short film called “When a Wave Comes.”

“I think a lot of times, Hollywood especially is a man’s world,” Schubert said. “It’s literally men making stories about men. ‘Harry Potter,’ ‘Lord of the Rings,’ all those top-grossing movies are big boy films about…white men with black hair.”

“When a Wave Comes,” the groups’ film project, follows the story of Mary, a woman who takes a trip to a run-down beach motel after losing a child and finding herself unable to connect with her husband.

Across the motel’s courtyard, she can see into the room of a pregnant woman, who she later meets. The two work through the grieving process together while reestablishing thoughts of what it means to be a mother.

“We consciously wanted to get out of Baltimore and get out of the Towson area to shoot the majority of it,” Michalski said. “[That] hasn’t really been done. We’re trying to take a lot of firsts.”

It is also important to the filmmakers that everyone involved in the production be able to connect personally to the story. Michalski grew up taking trips to the Eastern Shore, and the crew will be staying at her grandparents’ beach house during the shoot.

Even the actors feel heavily involved in the story being told.

Michalski said that they chose the actors more based on their background and how they related to the story, rather than based on looks, for characters.

“I think that’s really what makes this special, is their connection to the script,” Michalski said. “I’ve never had actors that have been this connected.”

The group used crowdfunding website Indiegogo to raise money for their film and reached their initial goal of $1,500 in only five days. “When a Wave Comes,” has raised $2,387 at the time of writing, and they plan to use any extra money to enter the film in festivals—which is often an expensive ordeal.

Originally, Michalski said that they wanted to make the best film that they could before they graduated.

“But I think this has turned into something bigger,” Michalski said. “We want to show what women in this department can do and will do in the future.”