Whenever I go to write a new article, I like to browse around the web and see what’s going on. I do this even if I already have an idea in mind that I’d like to talk about because there could be something more time sensitive or important that needs to be discussed.

Let me just say, I’m not a very advanced searcher. I’ll sit at my computer and search broad areas by typing “feminism” or “women” into Google, hitting the news button and weeding out all the not-so-credible sources.

I’m a little embarrassed about how simple that is, but I wouldn’t tell you my shameful news searching techniques if I didn’t have a point.

Usually what happens is I’ll be linked to news stories that don’t really offer what I’m looking for. Things like “Woman Slips in Best Buy Parking Lot” or the definition of feminism.

Sometimes I’ll find something great that I’ll share with you all, and other times I’ll find things that are fun to read, like “10 Feminist Songs You Need to Listen to RIGHT NOW,” but wouldn’t make sense for me to write a second time.

This time was different.

The three headlines that popped up first under the “news” section of Google were “Feminism Makes Weak Women,” “3 Millennial Women Explain How You Can Be a Feminist and Vote for Donald Trump,” and “Megyn Kelly Fails to Fit the Feminism Mold — and That’s a Good Thing.”

Whoa. Hold the heck up. What just happened?

Of all the times I have used this little technique, which is pretty darn often, I have never seen so much negativity. This is an absolute backlash, much like what happened in the 80s and 90s after the prominence of feminism in the 60s and 70s.

It’s becoming popular to demonize and misuse the word “feminist” so that people won’t identify themselves as such, and the movement will, eventually, die out. And, look, don’t tell me we should just start a new movement with a less heated word, because that word will become demonized, too, and we will be right back here again.

First of all, you are just not a feminist if you voted for a man who thinks you can grab women by the p***y. I mean, come on.

Second of all, being a feminist simply means you believe in equality — the equality and empowerment of all women. That includes women of color, women of all socio-economic classes and trans women. In what world is someone fighting for their rights and the rights of others “weak” or a bad thing?

Not in my world, folks. But it’s becoming so in the world America is creating for itself. We need to stand our ground as feminism becomes a dirtier word than it already has been because that’s an attempt to shut it down. It’s an attempt to erase the progress women have made and the rights we’ve obtained.

Don’t be afraid to say you’re a feminist. I know I say this so often, but now more than ever, it is extremely important in keeping the movement alive.

If someone talks down to you because of it or says they’d never be a feminist, explain to them what it actually means.

Explain to them that a feminist is someone who wants equality for all women. That’s it. Well, not “that’s it” because that’s a whole lot, but “that’s it” as in feminists aren’t swamp monsters crawling out of the puddles of hell to bring the next plague to your doorstep.

No, no. We aren’t. But that’d make a pretty decent B-list movie.

Being a feminist makes you strong. Empowered. It’s proof that you are fighting for a better life not only for yourself but for all women.

You can’t worry about what other people think of you when you know in your heart that you’re fighting for what’s right. It’s hard, y’all. And it’s going to keep getting harder. But the more we stick together, the harder we push, and the more people we can get proudly proclaiming themselves as feminists, the stronger we will be.

Now if you’ll excuse me, I’ve got a terrible movie to write. 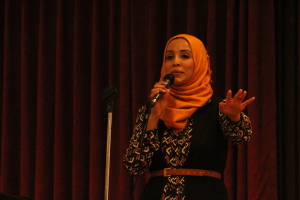 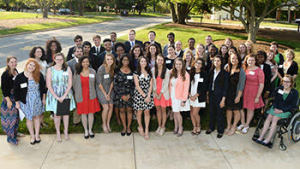