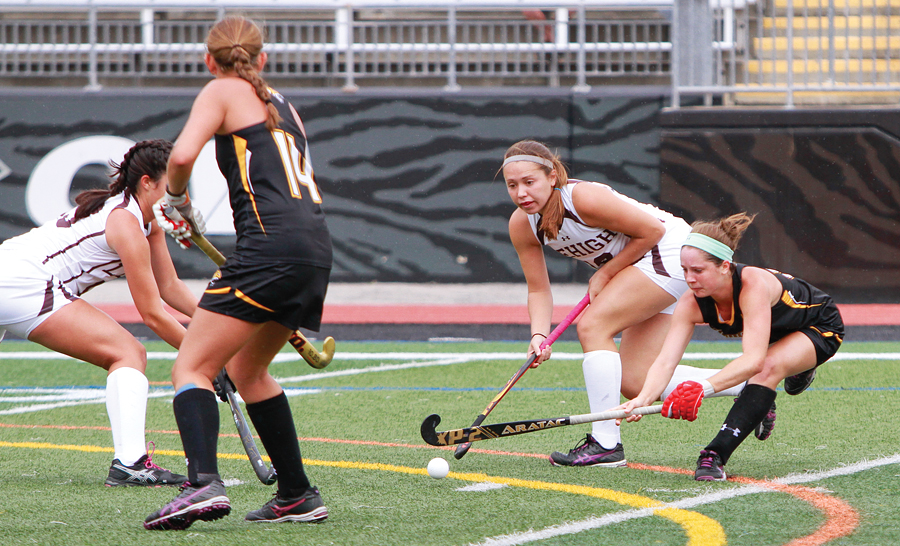 The Tigers celebrated senior day with the opening of the new field hockey complex. There was a ribbon cutting ceremony 15 minutes before the game, but there was not much to celebrate after the game.

Towson lost 3-2 against non-conference opponent Lehigh in the first contest on its new surface.

“I think we got a little bit caught up in the emotion of the moment,” Head Coach E.A. Jackson said. “I t

hink some of our athletes were distracted by things going on in the stands and who was here.”

The visitors got took an early 2-0 advantage as sophomore midfielder Lenke Havas scored for the Mountain Hawks 13:30 into the game. Freshman midfielder Olivia Perrone found the back of the cage with 8:06 remaining in the first half.

Sophomore attacker Beira Ho responded for the Tigers with 6:05 remaining in the first half to make it a 2-1 game going into intermission.

“We needed to regroup at halftime and say alright now we’ve got all of our nerves, out it’s time to go back to our game plan and play our game,” Jackson said.

Sophomore midfielder Maddie Leavitt scored a goal for the Mountain Hawks 13:17 into the second half.

Freshman attacker Olivia Blasone scored a goal for Towson with 4:25 remaining in regulation.

“They’ve been consistent leaders,” Jackson said. “Erica is the rock of this team. She’s unwavering in her attitude and effort every day. She shows up to train with the same intensity with which she plays in games with. Katie McNeel she executed, she finished for us. We looked at Katie to finish and she was able to do that today.”

In the final Colonial Athletic Association (CAA) game of the season on the road against James Madison, Towson looked to win its first conference game since 2011. The Tigers lost 3-1 at the JMU Field Hockey Complex in Harrisonburg, Virginia.

“That was the first time in 10 years that we have scored on JMU’s surface,” Jackson said. “The fact that we are able to score on their turf, is a really big deal and we have done that in 10 years.”

Sophomore midfielder Rachel Yeager scored a goal for the Dukes 5:46 into the game.

Towson would be within striking distance deep into the second half, but freshman forward Ongeziwe Mali scored a goal for James Madison with 10:56 remaining in the second half. Yeager scored her second goal of the game with 6:35 remaining in regulation.

McKay scored a goal for the Tigers with 20 seconds remaining in the game.

“The fact that Erica McKay came through with a play that we had trained in practice and was able to score in the last minute of the game really shows me that we have a great fighting spirit to build on,” Jackson said. “We don’t stop until that final whistle blows.”

With the season over and postseason play out of the question, the Tigers look to build upon their youthful core for next year.