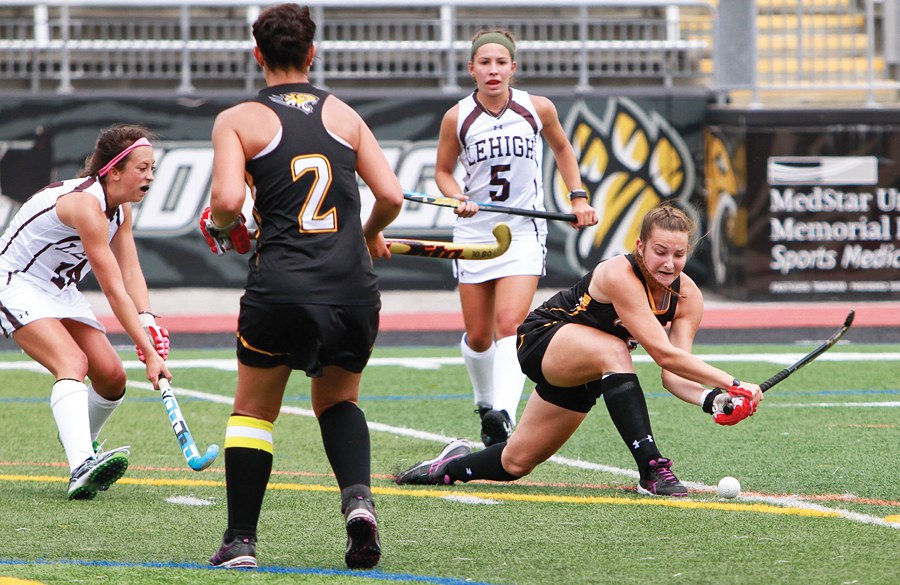 The first goal of the game came from Mountain Hawk, Teresa Carotenuto 11 minutes into the game assisted by Gabby Tofig.

Towson tied the game 15 minutes in when junior defenseman Morgan Skavdahl rushed the goal in a jumble and got the ball past Lehigh keeper, Julia Ward. Also a junior defenseman, Allie Stauffer, was credited with the assist to Skavdahl.

The Mountain Hawks answered after 24 minutes when Isabel McKeown scored off a breakaway in front of the net; Tofig earned her second assist of the game.

Wasting no time for Towson, senior midfielder Kelsey Jenkens scored her first goal of the season three minutes later on a pass from freshman forward Devon Hake at the top of the circle.

At halftime, the game was tied. Towson outshot Lehigh 10-9. Ward had three saves versus Towson’s junior keeper Megan Boyle’s two. Both teams had five penalty corner attempts, neither capitalizing on the opportunities.

“Our goalkeeper Megan Boyle has a fantastic game and really made some important saves during the game,” assistant coach Lindsay Kasten said. “Morgan Skavdahl, Kelsey Jenkens, Sam Zelenack all had great games and helped us create an offensive attack. We had great games from all of our players throughout the game.”

Six minutes into the second half, Stauffer scored her first career goal for the Tigers. She was assisted by junior defenseman Sam Zelenack off a breakaway at the top of the circle.

The last goal of the game came from Towson’s sophomore midfielder, Taylor Kvilhaug, at 50:32 off a penalty stroke. This was also her first career goal for the Tigers.

“It was great to see us earn a stroke, and Taylor to score on it really helping secure the lead. Everyone really played their part in the game and that’s what helped us win. Everything we have been working on since the start of season was put to use today,” Kasten said.

At the end of the game, Lehigh outshot Towson 19-13. Lehigh had 10 shots on goal to Towson’s eight. Ward was credited with four saves, Boyle with eight. Lehigh earned nine penalty corners, Towson earned five. Two cautions were issued in the game; one to Lehigh’s Zoey Pacheco at 15:21 and one to Zelenack at 56:14. One ejection was issued to Lehigh’s Alex Beatson in the 37th minute.

“I think the win today is really going to help us with momentum going into our games on the road next week,” Kasten said. “It’s a great confidence boost for the girls to know how they are capable of playing and I see a lot of wins in our future if the girls to play hockey like they did today against Lehigh. The coaching staff is extremely proud of how each individual game together and played like a team. Lots of good things to come for Towson field hockey.”

The Tigers go on the road next weekend to Rider on Friday, September 18 at 7 p.m., then to Monmouth at noon on Sunday.