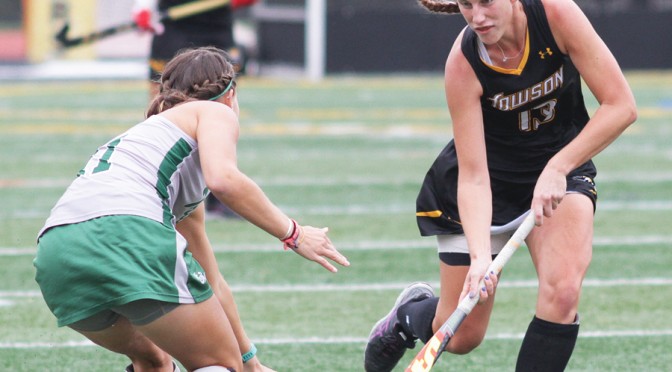 The Tigers fell short of a win twice over the weekend in their Colonial Athletic Association opener after taking on both James Madison on Friday and William & Mary Sunday at home, bringing their score to 2-10, 0-2 CAA.

“Overall I think we are starting to take what we are doing during practice and really apply it to the game,” Head Coach Carly Campana said. “So I am quite proud of them.”

The team started on a high note when senior Stacey Mackintosh scored a penalty corner goal in the fifth minute with an assist from junior Sam Zelenack.

James Madison responded in the 18th minute, and outshot the Tigers 20-3 in the first half.

The Dukes got two goals off penalty corner opportunities in the second half to secure a 3-1 victory.

“We learn something from every team that we play, we learn something about ourselves,” Campana said. “What we took away was things aren’t given to us, that we have to work continually for them.”

Mackintosh recorded a defensive save in the fourth minute, and the game continued as a stalemate until Cammie Lloyd converted a penalty stroke opportunity and got the Tribe on the board in the 24th minute.

In the first half, goalkeeper Emilee Woodall made five first-half saves for the Tigers, despite the Tribe’s 8-3 advantage in penalty corner opportunities and outshooting Towson 10-1.

Sophomore Sabrina Davis and Mackintosh both made defensive saves in the 49th and 51st minutes, respectively, before another penalty stroke in the 51st minute gave William & Mary a 2-0 lead and overall victory.

“I feel very proud of my team,” Campana said. “We had two strokes called on us and they both went in, but we didn’t let any goals go in during the game, during the field of play or on corners this game, so that’s an improvement right there.”

Neither team was able to convert any penalty corner opportunities into goals, despite the Tribes 12 chances and the Tigers three.

“Our girls love to play on Astroturf so for them it’s fun,” Campana said of the team’s upcoming away games. “It just brings them into a different atmosphere where they are kind of removed from being at home or anything that is going on, on campus. So in a way it’s nice because we can just be together, be a team and be us, and sometimes that gives us a competitive edge.”