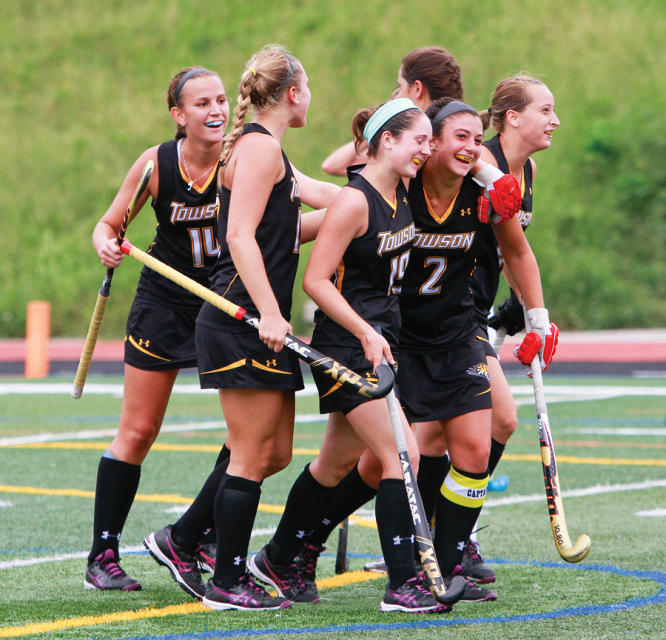 Towson split a pair of games this weekend, defeating LIU Brooklyn 3-1 Sunday, but falling 2-0 to Lafayette on Friday.

Towson took an early 1-0 lead over LIU Brooklyn on a penalty stroke from freshman forward Lexi Butler 12 minutes into the game.

“We tend to need a spark before we pick it up,” Head Coach Carly Campana said. “So [the first goal] was the spark.”

The Blackbirds battled back later in the half, tying the game 1-1 on a goal from freshman midfielder Madi Cook.

However, Towson scored again before the half ended on a goal from Butler to take a 2-1 lead into the locker room.

In the second half, the Tigers extended their lead to 3-1 when redshirt sophomore forward Natalie Hack found the back of the net. Butler was credited with the assist and recorded her third point of the game.

“In the first half, we knew we weren’t playing our best,” freshman forward Lexi Butler said. “In the second half, we just tried to spice it up more.”

Junior goalkeeper Emilee Woodall, who relieved senior goalkeeper Megan Boyle in the first half, made four saves and helped Towson secure the 3-1 victory.

Friday, Towson fell to Lafayette (5-1) on the road at Rappolt Field with a final score of 2-0.

The Leopards got on the board early and took a 1-0 lead over the Tigers thanks to a goal from freshman midfielder Rosa Jonckheer at 4:36.

This marked Jonckheer’s fourth goal of the season as she finished the game with four shots.

As the game progressed, both teams tightened up defensively. However, Lafayette scored on a goal from senior midfielder Amanda Magadan at the 54:26 mark to take a 2-0 lead over Towson.

The Leopards held on to win the game and outshot the Tigers 15-1 in the contest.

Towson will look to get back in the win column Sunday at Villanova against the Wildcats before opening up Colonial Athletic Association (CAA) play Friday night in Williamsburg, Virginia, against the William & Mary Tribe.

“I think every game we have gotten better and we have seen new things that we can put to work in our next game,” Butler said. “I am looking forward to the future.”