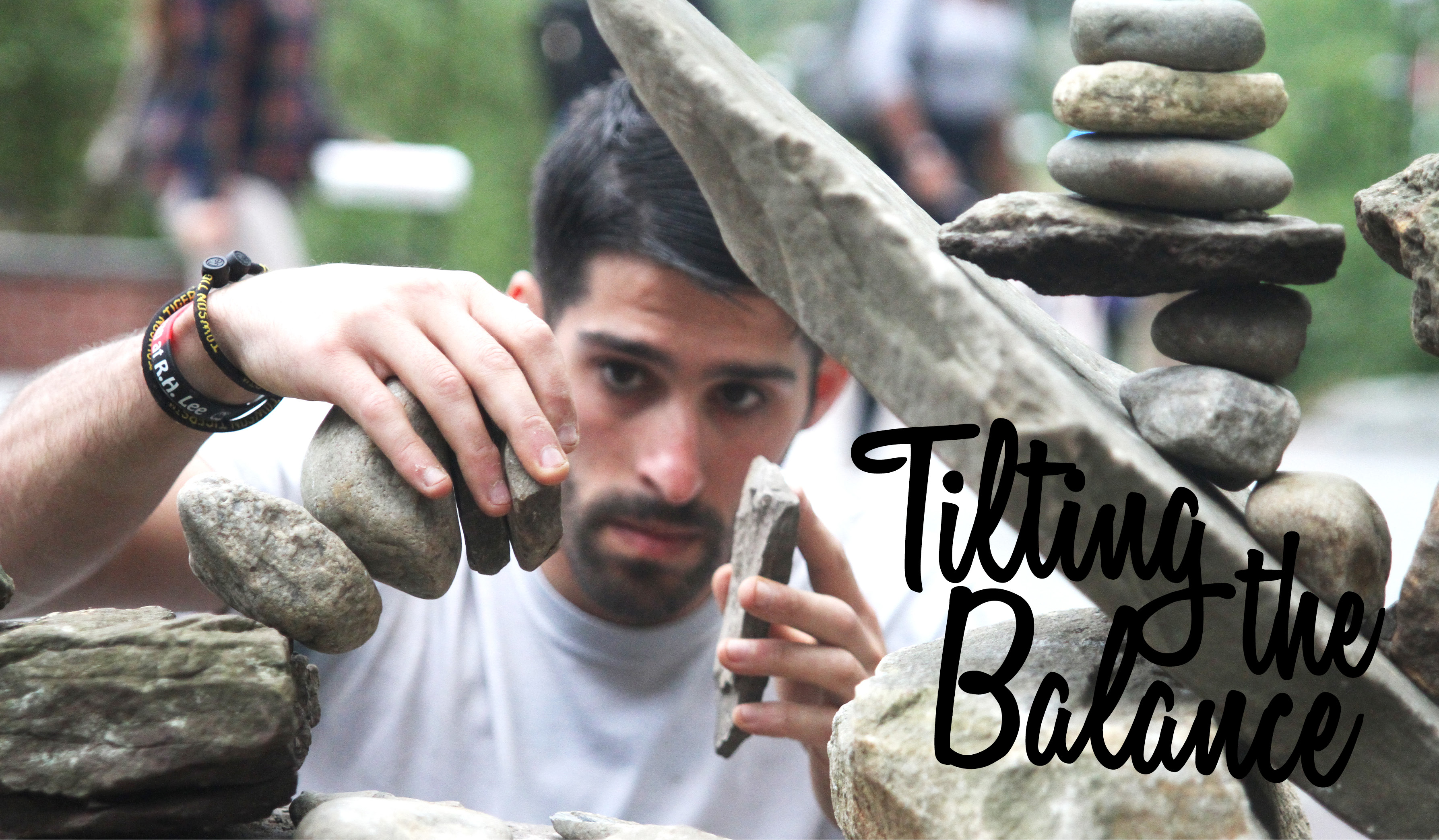 Sometimes you can catch the artist in the act, while other times they appear overnight, perched atop the ledge of the fountain outside of Towson’s University Union: stones that seem to defy gravity.

Senior early education major Tyler Bohn, who often does his building after late-night study sessions in the Center for the Arts, finds it calming.

“I’ve found it as an outlet for my ADHD,” he said. “A way to calm me down on an everyday basis, to be able to think clearly.”

Human-made piles of stones, used for centuries as landmarks, trail markers, for burial monuments and ceremonial purposes, among other things, are traditionally referred to as “cairns.”

Bohn simply calls what he does “rock balancing.” He began practicing the art two years ago, after a co-worker at Trader Joe’s told him about the cairn culture in Ellicott City.

“I found out the river in Ellicott City is dedicated to her father and they hold events annually,” Bohn said.

Ellicott City’s annual Patapsco River Rock Building event pays homage to local artisan Teddy Betts, who created sculptures like Bohn’s and was passionate about the upkeep of the Patapsco River watershed before his death in 2010.

“People from all around come and rock balance and make sculptures and do what I do to the best of their ability,” Bohn said. “I gave it a try one year and found out I was really good at it, and I’ve been hooked ever since.”

For Bohn, the art form serves as a kind of meditation. He doesn’t think about anything while he’s stacking, aside from how he’ll perfectly line up his tripods, which are the large indentations in some rocks that allow others to stand upright.

The only frustration that Bohn feels when he’s at work is when a rock won’t balance.

“But it’s a good stress, not a bad stress,” he said. “And by the time I’m ready to balance that top rock, I usually layer and do one or two balances. My mind is pretty at ease.”

Bohn says that rock balancing helps him focus and get through the day, which is essential when his days consist of eight or nine hours of homework. He enjoys getting outside and seeing people’s reactions.

“People that walk by think it’s cool and they ask me questions all the time, ask me how I do it,” he said. “But I kind of just do it as a self-calming thing.”

Bohn tends to attract a crowd whenever he stacks during high-traffic Union hours.

To Helen Bell, a senior art and design major, Bohn’s sculptures are reminiscent of the work of Andy Goldsworthy, another artist who builds from natural materials and is the subject of the documentary “Rivers and Tides.”

“[Goldsworthy] does the same thing with ice and rocks,” Bell said. “He’ll mold the rocks and ice and make an installation out of it. He’ll go out in the morning and film it throughout the day as it falls apart. It looks like ‘rock guy’ is taking inspiration from him.”

Bohn has been the subject of mass communication student assignments and Electronic Media and Film Department documentaries alike, but he said he doesn’t have plans to continue stacking after this semester.

After he graduates he plans to teach.

“I’m trying to get to my career,” Bohn said. “This is just a process to get there, and this helps me through school. When I’m no longer in school there won’t be a real need for it.”

Still, Bohn is interested in having a designated space in the CFA where students can clear their minds by balancing rocks between class periods. All he needs is the space, the rocks and the tools to landscape, although he’s too busy with schoolwork to write the paper required by the CFA before he can get access to funds and the location.

“I had a vision where people can just come and do this,” he said. “Now I’m trying to work with [the CFA] to just give them my idea verbally instead.”

Until that idea becomes a reality, this is the last semester that intricate cairn creations will be seen around campus, unless another student steps in to fill Bohn’s shoes.

Rock sculpting takes practice, but for anyone looking to experiment with balancing, Bohn offers that, “Any rock can be balanced. It doesn’t matter what shape or size they are. If they’re tripods, you’ll put them all together and it works.”