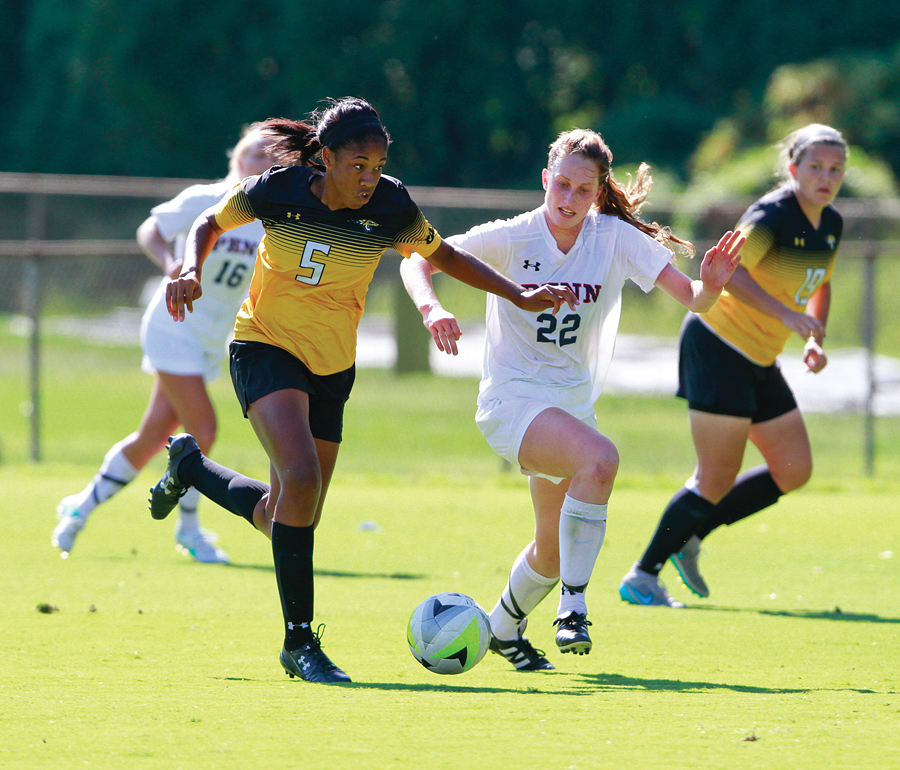 Towson went 1-1 during its road trip to Philadelphia this weekend, edging Temple 1-0 Sunday but losing 3-1 to Saint Joseph’s Friday.

“It feels great to get the first win of the year for the seniors,” senior midfielder Emily Marshall said.

Sunday, the Tigers (1-4-1) defeated the Owls (2-3) in a defensive battle at Temple Sports Complex.

The Tigers managed to put two shots on goal in the first half compared to the Owls’ one.

Despite an early flurry from the Owls in the second half, Towson struck first as senior forward Natalia Pinkney found herself one on one with the goalkeeper on a feed from Marshall.

Pinkney slotted the ball in the corner of the net for her second goal of the season.

Temple only managed two more shots throughout the rest of the game as Towson held on for its first win of the season.

Towson went on the attack early against St. Joseph’s taking only eight minutes to score the game’s first goal.

Green slid a pass through to Pinkney who put the ball into the corner of the net to give the Tigers a 1-0 lead.

Less than 30 minutes later, the Hawks equalized as Gabrielle Vagnozzi assisted Saint Joseph’s leading scorer Dakota Mills for her fourth goal of the season to tie the game.

The score was 1-1 going into halftime as the Hawks outshot the Tigers 6-2 while putting three shots on target.

St. Joseph’s continued to apply pressure in the second half as the Vagnozzi to Mills connection struck again in the 60th minute to give the team a 2-1 lead.

Less than 10 minutes later, freshman midfielder Nikki Logan had a chance to equalize for Towson but saw her effort denied by Perrott.

Mills then set up the final goal of the game by finding Bridget Galen with the game clinching assist to make it 3-1.

Towson will take on Bowling Green University this Friday at 4 p.m. in the Navy Invitational.