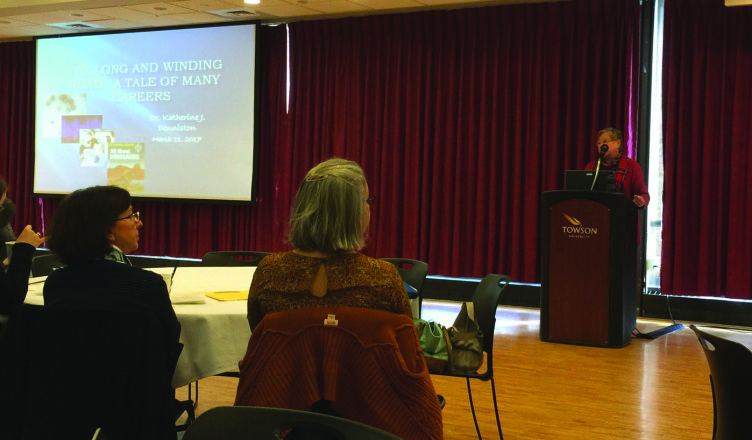 While women make up half of the total U.S. college-educated workforce, they only make up 29 percent of total workers in the science and engineering workforce, according to 2016 data from the National Science Foundation.

At Towson University, women make up 1,520 of the 3,378 undergraduate students enrolled in the Fisher College of Science and Mathematics — that’s approximately 45 percent — according to the University’s 2016 enrollment data.

“The fact that the Fisher College is now [almost] 50 percent women, suggests that we are really moving in the right direction,” Provost and Executive Vice President for Academic Affairs Tim Chandler said as part of an introduction to the University’s 2017 Women in Science Forum, hosted by the Fisher College.

University President Kim Schatzel shared her experience as being a woman in the workforce. In 1974, she was an electrical engineering and biology major – the NSF reports that in 2013, the percentage of female workers in science was the lowest within engineering, at 15 percent.

“A lot has changed, but there’s a lot more change that actually has to come,” Schatzel said. “I’m so thrilled [Towson is] able to provide a forum where women can come together and they can not only explore careers in science, but they can celebrate those that do have careers [in science,] and those who are aspiring for careers in science as well.”

The forum welcomed three female STEM professionals to campus and allowed attendees to network with each other.

Katherine Denniston, the now-retired deputy director of undergraduate education at the NSF, spoke to the audience about her experiences over 50 years, about how she ended up at the NSF and about how she is now contributing with other scientists to write a textbook.

She traveled to Washington D.C. for this talent search –  the first time she had ever left her home state of Pennsylvania. The winner of the top award, the late biochemist Roger Tsien, won a Nobel Prize in chemistry in 2008.

“If you don’t try something, if you don’t apply for opportunities, they are not going to happen to you,” Denniston said.

Dorothy Beckett, a professor in the Department of Chemistry and Biochemistry at the University of Maryland, College Park, spoke about her journey toward getting a career in science – from working in labs at Massachusetts Institute of Technology and Johns Hopkins University, to becoming a professor.

She also spoke about the roadblocks she has had along the way being a women in the field, and told the story of a male co-worker of hers, another professor, who referred to her as a secretary.

Beckett told the audience that they need to give themselves a chance to find out what they really love.

“Once you’ve established what you really love, go for it,” Beckett said. “I think that for most people if you persevere, and put a huge amount of effort in, you can get from point A to point B…. I’m not saying you won’t have hurdles – you will. But I think if you know you love something it’s a lot easier to deal with those hurdles.”

The final speaker of the morning was Jessica Shisler, the senior scientific executive at Spectrum, a science communications agency, and the president of the Baltimore chapter of the Association for Women in Science.

“[Women in science] is such a huge conversation, especially this week with International Women’s Day,” Shisler said.