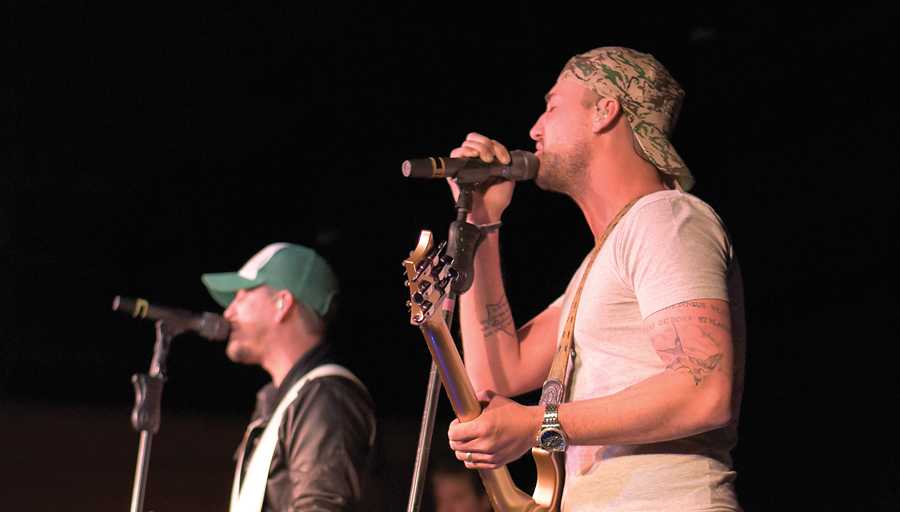 On Towson’s metropolitan campus, there doesn’t appear to be much of a connection between the surroundings of students and the pastoral landscapes described in many country songs.

However, the campus made room for country music lovers on Sunday night in Paws when the Campus Activities Board (CAB) invited artists Love and Theft and Joel Crouse to take the stage.

“Country is not the most popular genre on campus, but Towson has enough country fans that CAB absolutely wants to give them a show that is special to them,” CAB Assistant Director of Programming Matt Unglesbee said. “Each year, CAB tries our best to provide a show across a variety of genres, and our spring concert has typically been when our country show takes place.”

Stephen Barker Liles and Eric Gunderson, who make up the country duo Love and Theft, said that they were happy to be in Towson as it is an area they have not played in before. The band released their most recent album “Whiskey on my Breath” in February, and said that they have only received positive feedback since.

“It is actually the best-reviewed album we have ever had which is nice,” Liles said. “We wrote every song on it and we co-produced it with Josh Leo … so it’s cool to be a small part of what he’s doing in his career.”

Since the album release, Liles and Gunderson have been on tour and playing at various venues across the country.

Liles said that many of these performances have been on college or University campuses.

“I think our music is relatable when it comes to college students,” Gunderson said. “We will play for anyone but I think we have the most fun when we play universities and colleges.”

Traveling alongside them is 22-year-old country artist Joel Crouse, who has been performing with Love and Theft since October. Crouse took the stage as the opener for Love and Theft to play songs from both his album and new songs that have not been officially released yet.

Although he only released his first album “Even the River Runs” last August, Crouse said that most of the songs featured on it were finished roughly four years prior to their release. Since that time, Crouse’s life has changed drastically as he has moved out of his parents’ home, secured his record deal and begun traveling the country on tour.

“By the time the record label wanted to release it I had kind of already moved on from that record, which is weird to say,” Crouse said. “It’s still always going to be a part of me.”

Because of this, Crouse hopes that his newer music will help him to connect with his audiences more. He explained that the music he is writing now showcases a new but similar style, and contains lyrics a more personal message.

Like Love and Theft, Crouse also said that he enjoys playing at colleges and universities because of the energy in the crowd and the open-mindedness of that generation towards new styles of music.

“I really love playing colleges actually. One, it’s my peers and two, y’all can rock out,” he said. “I like our age group, and playing colleges is just probably one of the best things about what I get to do because I just relate with them so well, and I see people relating to my music and my show as well.”

Crouse also added that with his newer and more personal music, he hopes to show college students and his peers that, “there is more to life than Chevy trucks, tan lines and Fireball.”

Unglesbee said that he felt as though the event was a success and hoped that Towson students had the opportunity to have a fun experience outside of the classroom, which they will keep with them even after they graduate.

Toward the end of the evening, senior Torrie Manning was up on stage singing the chorus of “Free Fallin’” into the microphone with Love and Theft. Manning said that a friend of a friend pulled her to the side of the stage and got the attention of someone working the event.

“Before I knew it, I was staring at the crowd,” she said.