Towson University doesn’t have any official policies on “trigger warnings” or institution-wide “safe spaces,” like some colleges and universities do. Towson does have, however, a portal to report hate speech or action online—an effort that ramped up after a student-led occupation of the President’s office last fall.

Some professors include “trigger warnings” in their syllabi while others disparage the very idea of them as limiting academic freedom.

Richard Vatz, a professor of rhetoric and communication at TU, has expressed a belief that trigger warnings on syllabi may limit or endanger academic freedom. Last week, Vatz continued a TU tradition of hosting former Maryland Gov. Bob Ehrlich on campus.

Ehrlich, a Republican who was governor from 2003 to 2007. He competed against Gov. Martin O’Malley in 2010 but lost. In 2012, he was the chairman for Mitt Romney’s Maryland campaign. And, at least while he was on campus, Ehrlich was also a vocal and clear opponent of “trigger warnings” or “safe spaces” on a college campus.

“But I did go to college in the 70s, and I lived through the Civil Rights movement, the women’s movement, the anti-war movement, some of the great movements of our day,” Ehrich said. “My whole life has sort of been around protest. Particularly my younger years. Fast forward to now. I read about speech codes and safe zones and trigger warnings. And this anti-intellectual garbage that you’re being fed because some of you have been taught that, some of you, if you’re Irish you see a potato, you’ll think of the famine and, ‘oh no I’m offended.’ What is this? What is this?”

Ehrlich pleaded with the students in the room to reject the idea that they need “safe spaces,” or “speech codes” and “trigger warnings.”

Advocates of trigger warnings and safe spaces say that they’re important because they can warn students who might have certain life experiences that difficult topics may be coming up.

Ehrlich called them “antithetical to what college is all about.”

During the presentation, Towson University Presidential Scholar Nancy Grasmick called the idea of trigger warnings and safe spaces “anti-intellectual.” Grasmick, who also affirmed when Ehrlich said they were “anti-First Amendment,” did not respond to a request for comment.

During the presentation, Vatz said he wouldn’t vote for Donald Trump and said that Ehrlich, whom he called “the finest governor Maryland has ever had,” would have made “an excellent nominee for president.”

Ehrlich compared this election to golf, saying that it isn’t “a game of perfect.” And, even though he’s voting for Trump, there are some things that the candidate has said that he can’t defend.

“But you’re certainly not going to ask me to defend Hillary Clinton, I’ve been offended by the Clintons for 30 years,” Ehrlich said.

Before ranting against safe spaces and advocating for academic freedom and intellectual rigor, Ehrlich challenged the audience by talking about how the two main candidates have used different political rhetoric.

He got the class to discuss whether or not the claims the candidates were making were objective or subjective, whether they were base builders or base extenders, and how effective the claims were.

Vatz has reliably invited Ehrlich to speak to his classes about political rhetoric every semester for over two decades. 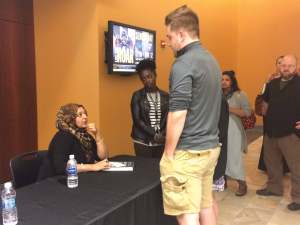