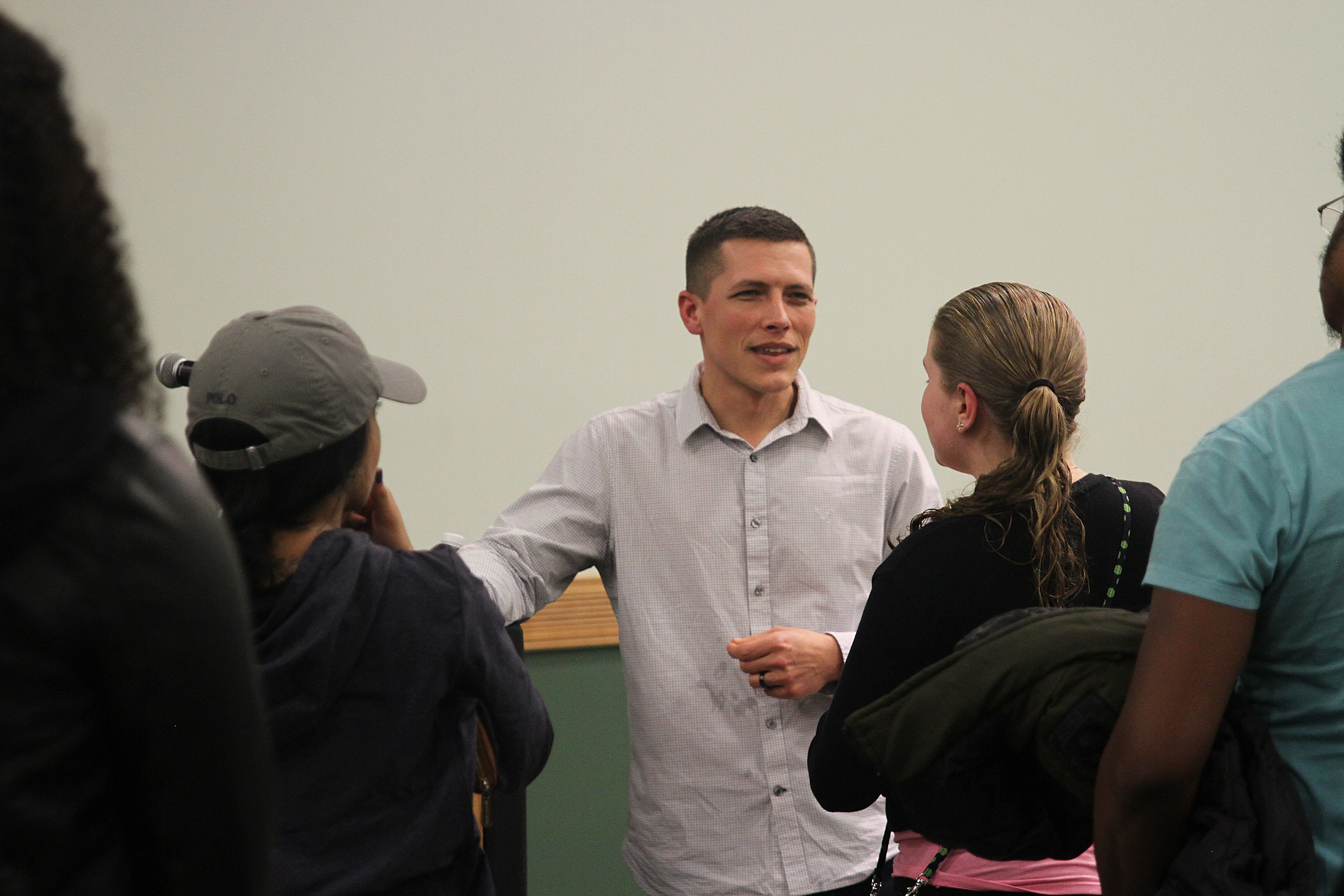 Police whistleblower and retired Sgt.  Michael Wood delved into his history with the Baltimore Police Department and his future as a proponent for a new era of policing Wednesday, during a Q&A-style discussion in West Village.

During the talk, Wood compared the differences in training methods between the Marines, which he said he joined for “discipline,” and local law enforcement.

In the Marines, Wood said that he had been trained not shoot unless someone had shot at him first. A sense of brotherhood and sisterhood among the troops was encouraged, he said.

However, when Wood later began training with the Baltimore Police Department, he was shocked at how the tactics used to teach officers-in-training greatly differed from that of military training.

“Immediately it’s us versus them,” Wood said. “You’re taught that you’re separate from society.”

In the Marines, if Wood had brushed another person with the butt of his weapon, he would have been kicked out, according to Wood. The Baltimore Police Department was different.

“The legal standard is fear,” Wood said.  “So, they don’t care how you go to fear, but that you’re there.”

According to Wood, in the police academy “you don’t learn anything about the law.”

At time of print, the Baltimore City Police Department has not responded to a request for comment.

When Wood first started with the Baltimore Police Department, he was put on foot patrol in Gilmor Homes. Wood said his ability to get promotions and move up the ranks was solely based on his ability to put people in jail cells, at the expense of black bodies.

Wood recalled doing drug busts in the Park Heights neighborhood and thinking he was making a real difference. Years later, he realized the change he wanted to make was in another direction.

Wood described days in a blacked-out van with cameras in different spots of a neighborhood, surveying for drug activity before the sun came up. But the more he did this, he began to become accustomed to the sights and sounds of a neighborhood just waking up – people making breakfast, heading to work and greeting each other.

“I saw for the first time, it wasn’t us and them,” Wood said. “They were brothers and sisters, aunts and uncles.”

Wood was lauded in the department for the arrests he made and was promoted through the ranks until he found himself teaching other officers the ropes.

Wood said the moment he knew he had to make a change in the department was when a room of officers that he was training did not know what a legal arrest was. However, when he began to alter his style of training to be more sensitive to the people of Baltimore, he was blackballed by the police department.

After tearing his shoulder out in the streets, he retired and found himself “on the other side of the badge” for the first time in years.

“When I joined the police department and the Marines, I was pursuing justice,” Wood said.

Later, Wood found that he could best pursue justice on a different type of front line – the picket line.

Wood stressed that police officers must integrate into the community they patrol, because they vow to “protect and serve” that community.  Wood extended an invitation to students in attendance and students everywhere to get involved and jump in on a picket line.

“All I ask is that you reserve your fear, look in the mirror and show up because that’s what we need,” Wood said.

“He was very open and very knowledgeable and I wish more police officers thought like him or protested because black lives do matter… I would definitely protest now,” Jones said.