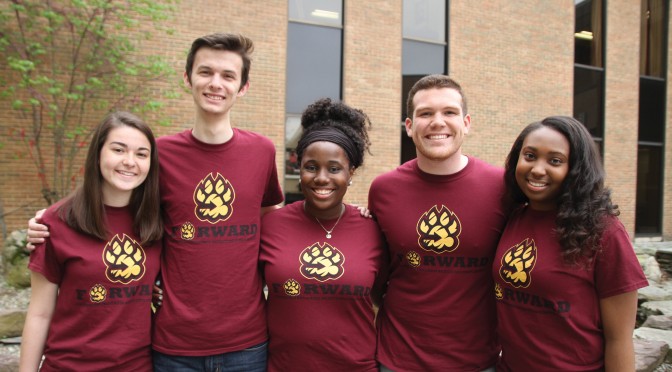 James, who served as SGA vice president for the past academic year, was elected with 904 votes. She came up with the Forward’s slogan: “continuing progress and rejecting complacency.”

“I think we did a lot of really great things last year,” James said. “We didn’t get everything done that we wanted to, and that’s OK. We just want to continue focusing on continuing to move forward.”

Approximately 3,247 students voted in last year’s highly contested election between The Roar and Ohana executive board tickets. Last spring, James was elected to the SGA vice presidency with a majority of 1,867 votes, more than any other candidate, including her ticket’s candidate for president. This year, while she still received the most votes, that number was cut to 904.

During the last uncontested SGA executive board race, decided in spring 2014, 39 students ran for the 18 available senate seats. In 2015, 33 students campaigned for the seats, with 12 aligning themselves with The Roar. This year, the senatorial race was completely uncontested, with only 13 students in the running.

James said that she suspects that the disinterest in running may have resulted from a recent shift toward a more professional focus within the SGA.

“One of the things that we wanted to do last year was change the culture of SGA, and I think we really did that this year. This is serious. You’re doing a job and you’re serving people,” she said. “I think people are more hesitant and taking it more seriously when thinking about doing the job.”

In order to fill the five remaining vacant senate seats, the SGA Election Commission is holding a second election. Petitions are available in the SGA office, and, after an abbreviated week-long voting cycle, elections will take place May 5.

The seven remaining seats in the 25-person senate are reserved for freshman and transfer senators. Per the SGA constitution, four will be appointed from the incoming freshman class, while three will be transfer students. The seven must be interviewed and appointed by the Senate Selection Committee.

Approved by 931 student votes during the election, the revised SGA constitution includes new autonomy for the solicitor general position, updated specific behaviors, the new process for selecting the SGA director of diversity outreach, along with other processes for addressing vacancies, resignations, membership rights and new bodies within the student government.

Mileo, a member of the SGA Senate Rules Committee that drafted the revised constitution, said that a lot of the new language in the document clarifies the responsibilities and behaviors expected of each role within the organization.

“Basically, we just added stuff that was already expected of a lot of the positions, but now we’re going to be able to hold them accountable,” Mileo said.