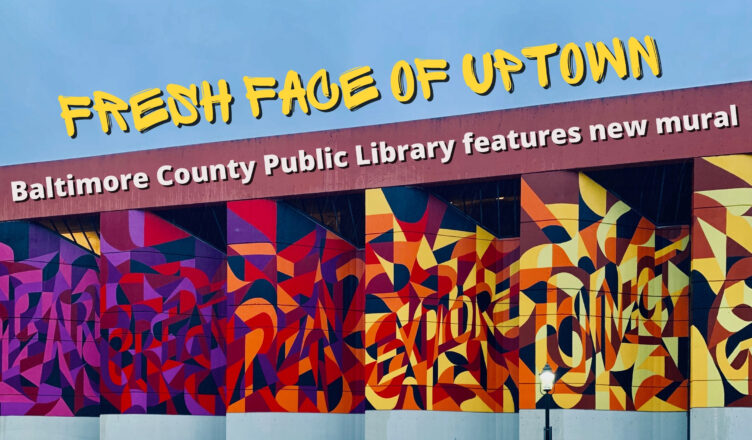 The Towson Creative Partnership (TCP), part of the Towson Chamber of Commerce, has finished its second mural project in Uptown, Towson, located on the face of the Baltimore County Public Library (BCPL) Towson branch.

In 2019, TCP completed the now well-known “Welcome to Towson” mural located alongside Nacho Mama’s, and painted by Greenbrier artist Amy Redondo. They also completed a mural in the Knollwood community, painted by artist Liv James.

On Jan. 22, TCP sent out an application for mural proposals, which roughly equates to 1,800 square feet.

“There is no specific theme required,” TCP’s application reads. “The theme for the mural is open for consideration to include the Towson community, Maryland, the Library’s mission, or its position as the ‘Gateway of Towson.’ No Preferred artist style or other parameters are specified for the mural image either. It can be realistic or abstract or some combination.”

A mural committee was also formed for decision-making purposes, including deciding on a mural, and an artist. The committee consisted of nine representatives from several entities including Towson BCPL, county officials, local business owners and members of the Baltimore County Arts Council.

According to Deirdre Aikin, co-founder of TCP and Chair of the Baltimore County Arts Council,  the committee received over 40 submissions. When it came time to vote, the committee ranked and compared each submission in order to come to a group consensus.

“I figured, as being the chair, I had to be as diplomatic as possible,” Aikin said. “That’s really important that who I like doesn’t influence other people. We’re very careful in that.”

The committee selected artist Ryan Adams, a painter and Muralist from Portland, Maine.

Adams, who painted the now completed mural with his friend, artist Bee Daniel, explained that his inspiration for this piece stemmed from his previous work and style.

“I used what I called the ‘gem style of work’ that I do, which is basically a geometric breakdown of letters, and I kind of add some motion in there normally with highlights and shadows,” Adams said

Adams explained that the architecture of the wall allowed for a unique experience. His vision for the piece was for each of the six panels of the wall to have a different word incorporated into the geometric shapes. The six words chosen are: create, read, learn, explore, connect and grow.

Mural committee member and co-founder of TCP, David Riley, explained that the idea to bring murals to Towson came about after traveling to cities with a large public art presence. He then presented the idea to a Baltimore County Council member and the Towson Chamber of Commerce.

“I noticed that in a lot of areas that public art definitely defines a community, it’s an economic driver and it really provides a lot of creative energy,” Riley said. “That’s particularly true in the number of college towns that I visited.”

Though the idea was well received by the county, funding is still necessary to mobilize such large-scale projects.

According to Executive Director of the Towson Chamber of Commerce, Nancy Hafford, to gain funding for the project, the chamber applied for the Maryland State Community Legacy Program, which provides local governments with funding for projects that will strengthen communities.

Hafford stated that approximately 90% of the funding came from the program, with the rest coming from donors. The project also received a $50,000 grant for any art project, with $35,000 of that being allocated to the BCPL mural.

“If we didn’t get that grant, we would never have been able to do it, because we couldn’t raise that kind of money,” Hafford said.

In terms of challenges, Adams cites the shape of the wall and fluctuating weather.

“The layout, figuring out how to layout the line work so that we knew exactly where to go, and how to make these words work and be legible on a pretty much wavy, deep surface, that was interesting,” Adams said.

When choosing the colors for the piece, Adams originally intended for each panel of the wall to have the same color scheme, however, after revisions from the committee, they settled on a different approach.

“With this being six different panels, they were really interested in seeing how gradient might work,” he said.

Adams believes that while the mural adds new depth to the building and its traditional brutalism architecture, he also feels it has a positive effect on the community.

“One of the things I love most about public art and painting large murals and different places is kind of the dialogue it can create, within the community and people that live there,” he said. “Seeing bright colors like that in a place where you’re not used to seeing them can kind of throw you off for a second and make you think about it, stop, look at it and maybe have a conversation about it with someone.”

“I really think that the impact that public art has on a community is huge,” Aikin said. “It just changes the way people look at the community. It gets a little more care, more foot traffic, because people love being around art and beautiful things.”