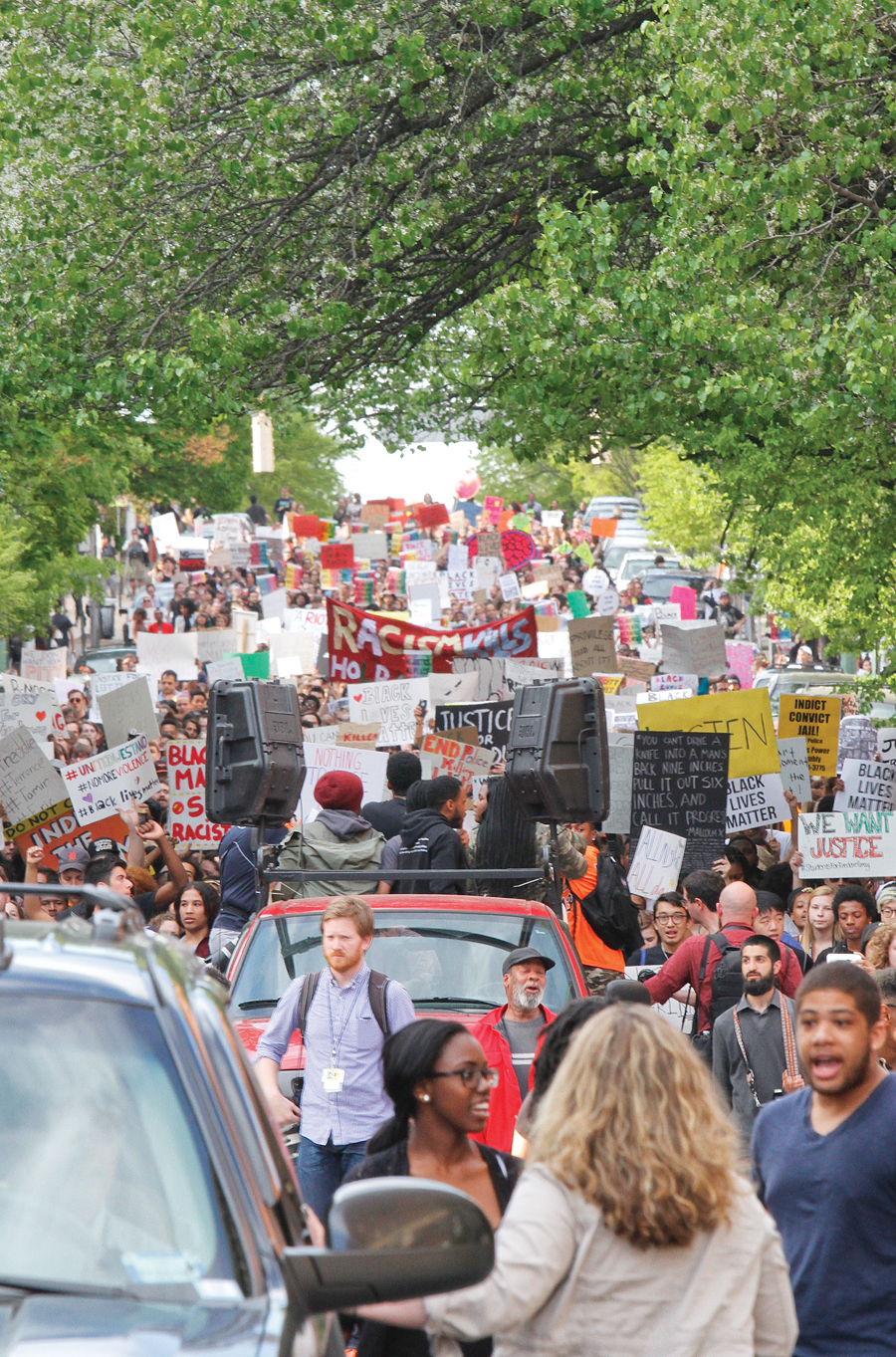 Hundreds of echoing and thundering voices filled the tree-lined streets of Mt. Vernon as a diverse crowd of protesters marched toward Baltimore City Hall, demanding to be heard, Wednesday, April 29.

The group of picket signs and banners carried by students from dozens of high schools and universities, families and other members of the Baltimore community, was led by two Towson students, Korey Johnson and John Gillespie. They rode down the streets in the back of a red pickup truck emblazoned with the message “Justice 4 Freddie Gray” as their calls for justice rang out.

“No justice, no peace. No racist police.”

From the bed of the truck Johnson and Gillespie guided the crowd of protesters with their arms linked in a variety of chants and calls and responses.

Gillespie said that when he climbed into the truck his thoughts were very focused on what was going to come next.

“It was all action. It was like ‘so this is what happens, this is what I gotta do now,’” Gillespie said. “I was constantly thinking in action.”

Gillespie said that he wanted to make sure that the crowd stayed energized, organized and peaceful.

“To see the amount of people show so much support and participate and fight for all of the things that we know are right and good with the world, I think that experience changed my life,” Johnson said.

Members of the National Guard stood armed and ready to intervene if necessary outside of city hall.

When the protest made it to the barricades, Johnson and Gillespie called for a moment of silence. The National Guard would not have to stop any rioters or looters today.

The message traveled back through the long line of protestors and soon the group fell nearly silent.

“That was gorgeous. That was absolutely gorgeous,” Gillespie said. “If people had any fear that we were disorganized, then that completely destroyed that.”

Penn Station to Baltimore City Hall wasn’t the only leg of the march on Wednesday. On Towson’s campus, Johnson and Gillespie led a rally at Freedom Square that drew the attention of faculty and administration.

Tara Bynum, an assistant professor in the English department, said that she attended the on-campus rally for a couple of reasons, including the fact that she is from Baltimore City and wanted to show support for her students.

“I have great problems with the way that black men and women are treated in Baltimore City and across the nation,” she said. “There needs to be some kind of reform.”

Bynum noted that she wasn’t sure, exactly, what that reform would look like, but that some sort of change needed to occur.

The rally on campus opened up with the crowd singing “This Little Light of Mine” and then moved into a student reading of a spoken-word piece.

The group of students did a quick loop past Cook Library and Linthicum Hall before heading back to Freedom Square to organize travel to Penn Station.

Emmanuel Duru, a Towson senior, went into Baltimore City first on Tuesday, and then again throughout the week, to take part in the clean-up initiatives.

“We had a big group organized maybe 60 people with trash bags, gloves and whatnot picking up what we can,” Duru said. “We just heard so many powerful things from people downtown, a lot of people were saying great things, like one guy was handing out voter registration cards, saying, ‘guys, let’s move for change.’”

Duru said that on the day he and his friends were in the city, the CVS that had been looted had a powerful, horrible smell like it was still burning.

“We cleaned up a lot of trash,” he said. “The irony of when I was cleaning trash up was that I was cleaning up trash in a CVS bag so it was just like yeah, the city was messed up.”

Duru said that there was “a lot of positivity” and people handing out water and feeding protesters when he was in the city.

“It was so real and the people there genuinely care about the city because when you live there, even though it’s a rough situation, you learn to work with it because that is where you are from,” he said.

On Towson’s campus, in addition to the student-led rally, faculty members came together to organize teach-ins on Thursday, April 30, and Monday, May 4.

“We are educators, so by nature, we seek understanding and ways to make sense of things that affect the community. That’s what we were trying to do,” Daniels said.

The two worked with offices on campus, like the Center for Student Diversity, to bring the events together.

At the first teach-in, over 100 people gathered in small-group circles to discuss what was going on in Baltimore and their thoughts and ideas about the larger issues.

Kenreich said that he was “thrilled and delighted” with the turnout, and happy to see such a diverse mix of students, faculty and administrators.

“I give a lot of credit to Towson for being as out front on this as we’ve been,” Kenreich said. “We all need to be in the business of figuring this out together.”

With six officers involved in the Freddie Gray case being charged criminally and the curfew in Baltimore City lifted, some of the tension seems to have been reduced, but for Gillespie and others, the work is not finished.

“I don’t think that that’s the end,” he said. “Charges is not a conviction and a conviction is not the end of police brutality on black people. It’s still the beginning.”

In addition, Johnson said that the issues they’re involved with are “a constant struggle.”

For individuals looking to further discuss these events, Towson will be holding a third teach in Wednesday, May 6 at 2 p.m. featuring guest speakers and a panel discussion on how the events in Baltimore have impacted Towson. Additionally, faculty and staff will be available to engage in drop-in conversations at various dining halls and the University Union on May 5 and 6 from 11 a.m. to 1 p.m.

— Carley Milligan contributed to this article.

One thought on “From Campus to Charm City”