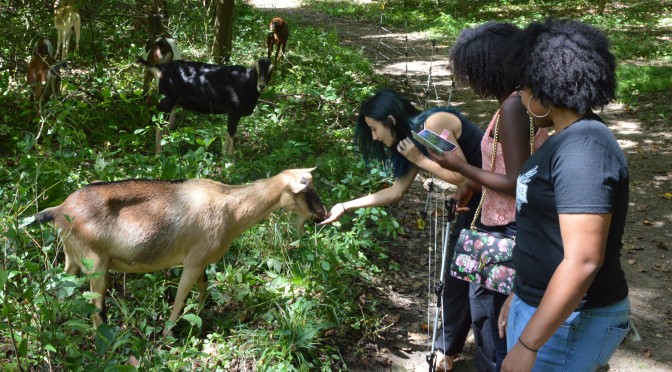 Harmony Church Farm has once again lent its goats to Towson University for an eco-friendly cause.

“Our task is to remove invasive species,” goat herd owner Ronie Cassily said. “We were hired by [Professor James Hull] who’s in charge of this arboretum here at Towson University.”

Named “Harmony Herd,” the group of 20 goats is spending its third year helping out on campus. The process will last for about a week, with the goats working in different sections of the arboretum.

“What happens is the goats come in and eat all of the vegetation,” Cassily said. “Wherever we see a vine, we cut it with clippers.”

The goats fertilize the land with their manure and there is no need for herbicides. As another positive, large equipment doesn’t have to be trucked in.

“Goats are ruminants,” said Cassily. “A ruminant is an animal that has four digestive chambers. One of them is a true stomach.”

With an internal temperature of 106 degrees Fahrenheit, goats have a high metabolism, which causes them to eat and go to the bathroom frequently, Cassily said. She added that with this high metabolism, the goats lie down, chew their cud and get back to eating after about an hour.

“There’s not too much they don’t like,” Cassily said. “

Porcelain berry is an invasive plant on campus. With vines covering the trees, they block out sunlight, which is essential for a tree’s survival, said Cassily.

The vines pull them over, and they can fall over in a storm due to their weakened state.

“This is not a problem just unique to Towson, it’s a problem all over the entire state of Maryland,” she said.

The project was funded with around $3,000 in donations from the Panhellenic Association and the Interfraternity Council, according to Director of Fraternity and Sorority Life Matt Lenno.