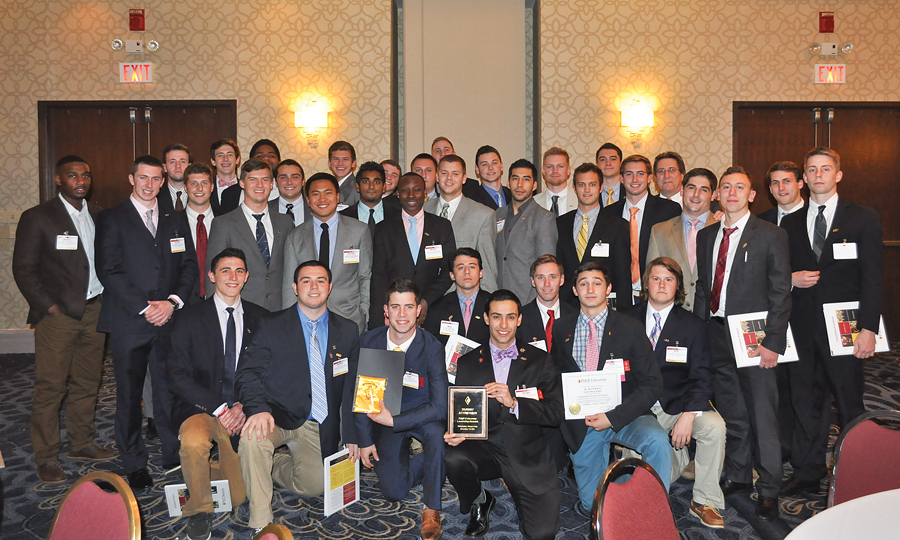 After years of sending only four to five members, the PIKE fraternity chapter Lambda Omega brought 35 members to this year’s Leadership Summit in Philadelphia, the most in attendance, earning them a shout-out from Kim Novak, director of risk education prevention and featured speaker at PIKE University.

“I wan to credit Sergio Mejia for getting everyone involved because he’s been organizing it for the last two years and he made a huge push for a lot of people to go,” sophomore and member of the Lambda Omega chapter Kyle O’Rourke said.

PIKE University, who hosted the summit from Nov. 7-9, is a national fraternity program that works to prepare its members for college life and ‘the real world.’

“PIKE has leadership summits and it’s all under the program of PIKE University, which basically are workshops and guest speakers just like to go over how the chapter should be running and ways that we can solve problems that the other chapters are experiencing, along with public speaking workshops, organization, and self-finance,” O’Rourke said.

The many workshops members take part in work to build confidence and leadership skills and help PIKE members to develop a sense of pride and accomplishment. “Garnet status” is granted to members, like O’Rourke, who have attended three PIKE University conferences. “Gold status” is granted to those who have attended five and comes with letters of recommendation from the CEO of PIKE University.

“Frats aren’t all about getting girls and partying all the time, you can really better yourself,” sophomore and new member of the Lambda Omega chapter Tom Vondersmith said.

O’Rourke said that the fraternity has worked hard to better themselves this semester, and that he is most proud of how they have been able to turn around their image.

“We had a problem and we addressed it and now we’re fixing it. Now we’re on the good path,” O’Rourke said.

After an unspecified incident with PR, the Lambda Omega chapter has garnered respect from their large turnout at the PIKE University conference.

“I’m most proud about the leadership skills that our president and vice president have. They always carry themselves with that professionalism and also our alumni,” Vandersmith said.

This ‘good path’ goes well beyond the undergraduate world, as PIKE alumni are still active members and supporters of the Lambda Omega chapter. They provide advice and guidance in the decisions of the fraternity.

“They still have an active part in the chapter, just making sure we’re making the right choices,” O’Rourke said.

With active alumni and a considerable turn-out at the PIKE University conference, Lambda Omega is determined to be an elite chapter.

“We get everything we need to do done and we keep trying to get better at it,” O’Rourke. “We’re here for a lot more than just to have fun.”