On May 8, Towson University’s literary magazine, Grub Street, launched its 68th volume. The launch took place outside of the reading room on the fourth floor of the Liberal Arts building where tables supporting the newly printed Grub Street literary magazines decorated the space.

Grub Street is an award-winning literary magazine that is run by Towson University students. The creators behind this magazine are students of Professor Jeannie Vanasco from enrollment into her “Editing the Literary Magazine” course. Vanasco also serves as the faculty advisor for Grub Street.

“The staff’s kindness toward one another was remarkable,” said Vanasco. “They advocated for one another, telling me when someone was working especially hard.”

Chairs were set up, as well as a projector which featured the art pieces launched in the magazine’s latest edition. The event also featured live performances of some of the literary works included in the new issue, performed by the original authors themselves. For example, Christy Kato, a 2018 Towson grad, presented a nonfiction piece about not feeling connected to her own body, not knowing how to cope with the disconnect, and the idea of fearing her own body. Tim Neil, another Towson grad, wrote a poem about one egg being left in the carton.

“This issue differs mostly from the rest of the issues because of the contemporary take we sort of stuck on it,” said Morgan Middleton, the editor-in-chief of Grub Street. “We tried to reflect on what’s going on in society and a lot of different kinds of political values and things that people are really feeling. We wanted to have this raw emotion be said.”

With food, a photo booth, and lots of literary works, the Grub Street team attracted a big audience, rewarding all of their hard work this past year. There were games, prizes, and lots of laughs. The ceremony ended with a dedication to Hannah Nathan Rosen, a former Towson University student who passed away suddenly last year, along with huge thank you from the Grub Street staff to their Faculty Advisor, Vanasco.

“I had never been to an event like this before and was overall curious,” said freshman Elizabeth Castro. “The few classes that I’m taking which involve creative writing, do not have a lot of students who are willing to express themselves the way people in Grub Street do. It’s refreshing to hear what someone else has to say, and not treating it like an assignment they needed to get done.” Grub Street is open for anyone to submit to. They encourage a variety of writing styles, such as poetry, fiction, nonfiction, visual art, as well as out-of-the-box submissions such as poetry comics, flash fiction, flash essays, lyric essays, graphic novels, graphic memoir excerpts, and speculative nonfiction. Grub Street’s submission process can be found on Submittable, where after creating an account and uploading your work, you can monitor submissions. More information can be found at https://www.grubstreetlitmag.com. 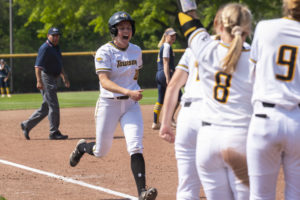