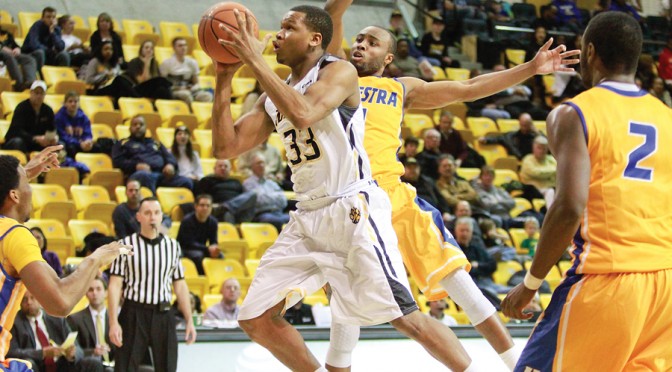 It was a tight battle between the Towson Tigers and the UNC Wilmington Seahawks on Saturday afternoon at SECU Arena, but the conference-leading Seahawks were able to escape with a 73-69 win.

The loss was Towson’s (12-17, 5-11 Colonial Athletic Association) sixth conference loss this season that was decided by five points or fewer.

It’s also the fourth straight loss by that margin and ninth game in the last 10 decided by 10 or fewer points.

“Another heartbreak hotel game for us,” Head Coach Pat Skerry said.
The Tigers jumped out to a quick 7-0 lead, which quickly evaporated. However, they kept it close throughout.

With fewer than four minutes left in the first half, Seahawks’ (16-11, 11-5 CAA) forward Dylan Sherwood drained a basket from beyond the arc to give his team a 30-21 lead, its biggest of the period.

The Tigers responded with a 7-0 run and went into the locker room at halftime down, 34-30.

Nine of the Tigers’ 14 turnovers came in the first half. The team is averaging 13.1 turnovers per game this season.

“Turnovers hurt us and then the last 15 minutes we settled in pretty good,” Skerry said. “We obviously scored the ball at a high rate again, which is encouraging.”

With 11:59 left in the second half, the Seahawks extended their lead to 45-36 after a basket from senior guard Addison Spruill. The North Carolina native finished the game with 26 points on 8-of-16 shooting and grabbed eight rebounds.

“Give Spruill credit, he’s been a killer for us,” Skerry said.

Junior guard Four McGlynn responded immediately with a 3-pointer to cut the deficit to six.

The Tigers’ grabbed their first and only lead of the second half when McGlynn hit a put-back layup for a 56-55 lead with less than five minutes remaining McGlynn finished with 12 points on 4-of-7 shooting.

The Tigers were not able to produce a big run to take control of the game. Instead, the Seahawks made their last 14 free throws in the last three minutes of the game to seal the win.

Two games remain in the Tigers’ regular season before the start of the CAA tournament on March 6.

The Tigers take on the William & Mary Tribe on Wednesday in Williamsburg, Virginia. In their last meeting, the Tribe beat the Tigers 85-72. Tip-off is set for 7 p.m.

The Tigers then close out the regular season at home on Saturday against the Delaware Blue Hens.

The game is scheduled to start at 2 p.m. 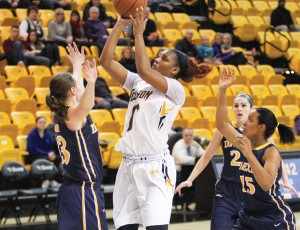