The Blue Hens take a shot from the left wing, but Sebolao steps up and snatches the ball with her mitts to secure victory for the Tigers.

“It takes a lot of mental strength to be a goalie,” Sebolao said. “I think since freshman year I have really matured a lot in that aspect of the game, realizing it has to go through 10 players before it goes to me. I also have really supportive coaches and teammates that help me.”

Sebolao has been making important saves as the Tigers’ starting keeper for the past two seasons. This season, she has recorded six victories, posted a 1.43 GAA and has made 85 saves in 16 games. Sebolao has also recorded five shutouts this season, against St. Johns, Temple, George Washington, Delaware and UNC Wilmington.

However, Sebolao has her sights set on bigger goals. She hopes to help lead the team back to the conference playoffs, a feat that has only been accomplished once in program history.

“I think just getting into that [2014 playoff] game for a few minutes just showed what I wanted to do if I got the starting job,” Sebolao said. “I think that’s our goal every year. We obviously want to host a game, but just getting to the tournament I think is in reach now.”

Sebolao had to wait her turn before contributing to the team’s success. In her first two seasons, she watched goalkeeper Erin Quinn from the sidelines.

“Quinn was an awesome teammate,” Sebolao said. “She really helped me to develop my game by allowing me to push her at practice and learning from her techniques.”

In her first game as Quinn’s successor, Sebolao allowed only one goal and made 10 saves against Bucknell.

Sebolao only got better as the season progressed. She made 118 saves that year, which ranks sixth in a single season in program history. She also finished with a 1.23 GAA, tying Quinn for ninth-best in a single season.

While Sebolao has seen success in her career at Towson, she was not always a soccer player. Sebolao did not start playing until her freshman year of high school, and even then she considered herself to be a basketball player.

“Taylor was an unbelievable athlete,” Scotch Plains Fanwood Athlete Director Ryan Miller said. “Her ability to take over games was unbelievable. She was the kid you wanted to have the ball and we have not found anybody like her since she has graduated.”

Soccer Head Coach Greg Paynter approached Sebolao at one of her basketball games.

“Greg came to one of my high school basketball games and honestly put all of his eggs in a basket and just rolled the dice with me,” Sebolao said. “I guess it paid off.”

Although Sebolao is approaching the end of her career as a redshirt junior, she wants to make the most of her time as starting goalkeeper.

“It’s been awesome,” Sebolao said. “When I first walked onto campus I wasn’t sure if I was even going to last all four years. I think I have definitely grown as a person and my soccer talent wise. Other than that it’s just been a fluster of emotions. It’s just been a rollercoaster.” 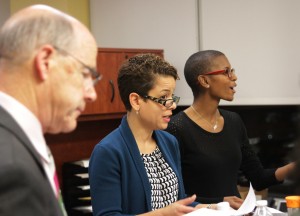