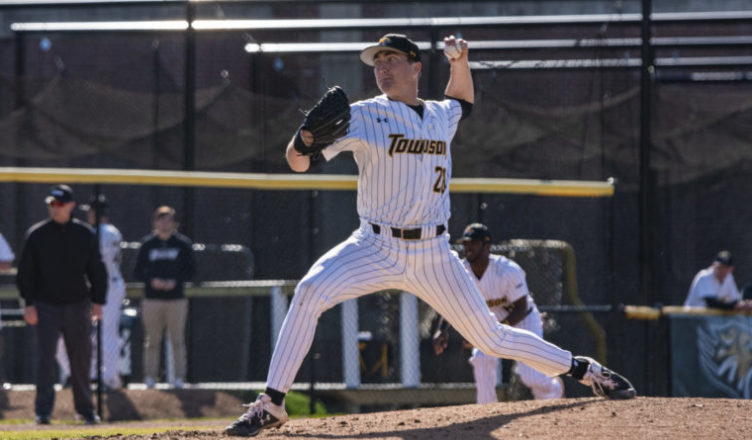 Towson defeated UMBC 21-4 in their home opener, scoring the most runs in a game and a single inning since 2011.

Coming off of a three-loss weekend series in Miami, the Tigers (3-7, 0-0 CAA) had their best game of the season on Tuesday as they scored their first 11 runs in the fourth inning.

“Going down [to Miami] and playing three very competitive games made them believe that we can play with anyone when we play well,” interim head coach Miles Miller said. “When we play good baseball, we can play anybody.”

Eight pitchers made an appearance for Towson, but senior southpaw Austin Weber was credited with the win. He pitched 1.1 innings allowing one hit while facing six batters.

The Retrievers (1-8, 0-0 America East) took a 3-0 lead in the third on a three-RBI double taking advantage of a Tigers error. A two-RBI double by senior infielder Brad Powers put Towson on the board. Following an RBI double by freshman catcher Burke Camper, two Tigers were hit with the bases loaded.

“[UMBC] jumped out to a three-nothing lead and we weren’t playing very well, but we stayed with it and it just kept going for us,” Miller said.

Powers went deep to left-center for a three-run homer to wrap up an 11-run inning for Towson. He went 3-5 in the game and finished with a team high six RBI.

“Offensively, we’ve got to keep the pressure on because it gives us good results,” Powers said.

Three of the five runs scored by the Tigers in the fifth inning were off of walks. UMBC gave up 13 walks in this game while Towson gave up four.

“It is interesting for our guys to be on the other side of it and see how much success we can have when we are throwing strikes,” Miller said.

Freshman left-handed pitcher Pete Marchineck made his first collegiate appearance and after allowing a hit, retired the next three Retrievers batters in order.

“[Pete] had a great inning and to see how excited he was coming off the mound, it was awesome,” Miller said.

Camper hit his second two-RBI double in the eighth and went 2-3 with four RBI as the Tigers designated hitter.

Towson returns to Schuerholz Park this weekend for a four-game series against Lafayette starting on Friday, March 6 at 2 p.m.

“We’ve got a lot of positives to take away from today, but we need to keep the foot on the gas and keep working hard,” Powers said.