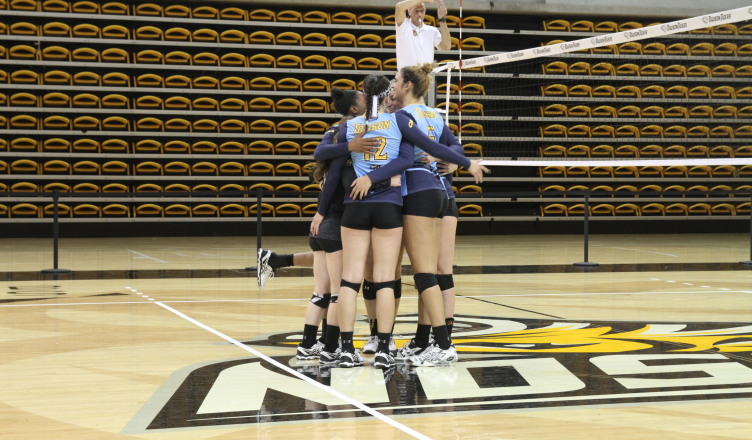 “The Oakland team we saw tonight has been our toughest competition of the season so far,” Head Coach Don Metil said. “We knew that they were a strong team, but if we matched power with power, attitude with attitude and effort with effort, there is no way we couldn’t come out on top.”

Juniors Jocelyn Kuilan and Anna Holehouse led the way for the Tigers (14-0). Kuilan, who was named the tournament MVP, recorded 41 kills, 14 digs and five blocks over the weekend. Holehouse registered 65 digs and 14 assists throughout the event.

Junior Carola Biver also impressed, putting up 29 kills and 36 digs over the weekend. All three players were named to the all-tournament team.

In the Saturday afternoon matchup against the Golden Grizzlies (5-7), Towson battled to a 22-22 tie in the first set before closing the set 25-22 to go up 1-0. The tight competition continued in the second set with 10 early lead changes taking place.

An error by the Golden Grizzlies ultimately pushed the Tigers to a 25-22 win and give them a 2-0 advantage. Oakland continued to fight, though, as they came back to capture the next two sets, 25-17 and 25-19, tying the match 2-2 and forcing a fifth set.

Towson jumped out to a 5-0 lead behind a kill from sophomore outside hitter Annie Ertz and four unforced Oakland errors. Oakland battled back to make it 9-7, but a service ace from freshman defender Camryn Allen and a kill from Kuilan gave TU a 3-2 victory.

“The girls did a great job resetting between the fourth and fifth set and came out strong,” Metil said. “Matches like these really make them dig down deep and shows what your team is made of.”

Towson swept the first match of Saturday’s doubleheader against Kent State (1-9) in straight sets 3-0. The Tigers captured the first set 25-10 behind four kills to end the set by Junior Olamide Sonuga. The second set was more competitive, but Towson edged past Kent State, 26-24. The team closed out the final set 25-20 on a kill from senior Julymar Otero to sweep the competition.

Biver and Wonders led the way for the Tigers with double-doubles. Biver had 14 kills and 15 digs while Wonders recorded 27 assists and 13 digs.

Towson began the weekend Friday night with a 3-1 win against Fort Wayne (7-6) that included 32 ties and 13 lead changes.

The Tigers are one of seven Division-I schools who remain undefeated, including fellow Colonial Athletic Association (CAA) member James Madison (9-0).

Towson returns to competition on Sept. 22, as the team opens CAA play against Elon, followed by a trip to William & Mary on Sept. 24.

“They say the toughest thing to do is to win your own conference and now it is time to show up,” Metil said. “Performing well against power 5 and nationally recognized schools is important but without winning the conference it is hard to make the postseason.”