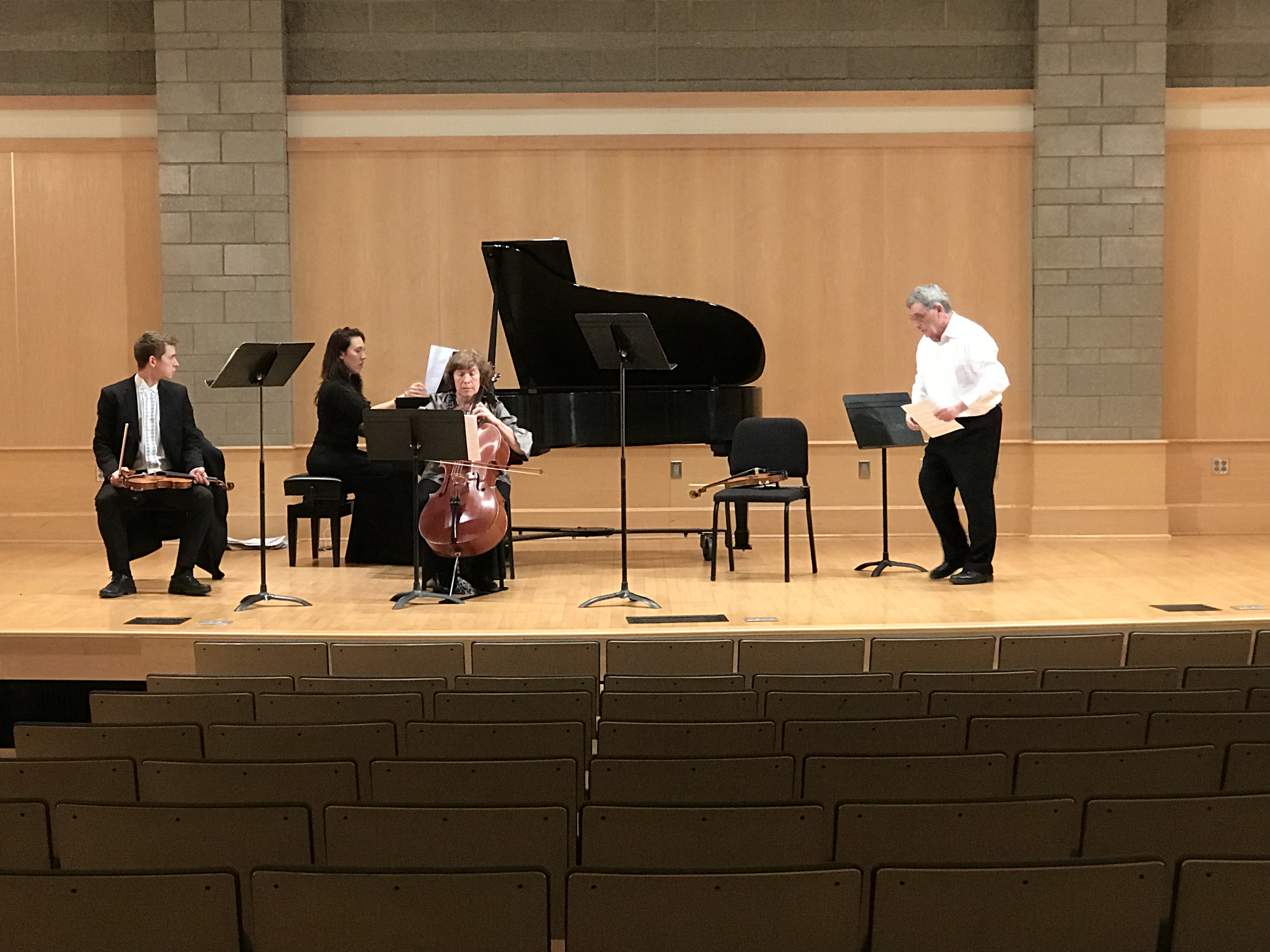 Ahead of National Holocaust Remembrance Day, Towson University’s departments of music and art and design are holding a series of programs spread awareness to the victims of the genocide.

The series, which kicked off Sunday with a guest artist recital, is meant to remember the millions of Jewish people and other minorities who the Nazis murdered during World War II.

Charles Borowsky, president of the International Institute for Regional Studies and president of Intermuse Performing Arts Bureau, hopes to use music as a way to keep such tragedies from ever happening again.

“We don’t have to look very hard to find acts of inhumanity in this day and age…. [This concert], performed by these dedicated and acclaimed musicians, has been intended not only as a memorial for the victims of the Holocaust and Gulag, but also to serve as a catalyst for evoking, nurturing, and promoting mutual respect, tolerance, and cooperation,” Borowsky said.

The concert, which was held at the Recital Hall in the Center for the Arts on Sunday afternoon, was made up of a collection of songs by Jewish and Lithuanian composers, and was meant to express the journey of people through hard times.

Borowsky’s wife, TU faculty member and cellist Cecylia Barczyk, and their children — known as The American Virtuosi — performed pieces alongside famed Lithuanian violinist Borisas Traubas to showcase how music can be used to bring people together while telling stories of sorrow, hope and forgiveness.

The idea of storytelling through music was especially important for Traubas, who came from Lithuania to share his musical knowledge with Towson. Borowsky served as a translator for Traubas, who does not speak English.

“Music is my life,” Traubas said. “I’ve played so many years. It’s the way of expressing what you can’t express in many other ways that I love. You don’t have to say any words to express your emotions. Music is for a lack of words and can go above and beyond.”

Traubas, whose parents were survivors of the Holocaust, began his musical journey when he was seven years old. His parents wanted to provide their children with an education that could lead to a good source for living; classical musicians were well-paid during Traubas’ youth, and so his parents sent him and his siblings to music school. He has been gracing audiences with his violinist charm ever since.

Traubas said the purpose of music is simply to “overcome evil by doing good.”

Upon arriving at Towson’s campus, Traubas spent an afternoon holding a masterclass for TU’s music students prior to his concert performance. The intimate practice session was held Thursday, with a trio and solo cellist performing in order to gain feedback from the musician, as other music students observed in the audience. Sydney Bennett, a graduate student majoring in cello performance, enjoyed the unique opportunity of working with Traubas.

“It was very enlightening,” Bennett said. “It was great to get a second set of ears to listen to me. It was very encouraging…. I felt very comfortable. I certainly learned a lot and it was just a really good overall experience to have.”

Although Sunday’s concert was the main focus of Towson’s series, the remembrance days at TU are also set to include a poster exhibition and a film showing.

The poster exhibition, entitled “Design Advocacy: Genocide and Injustice,” runs through Saturday, May 12, and includes designs made by Towson graphic design students that highlight violations of social justice.

“Gitel,” the film being shown on April 12, explores how the Holocaust affects survivors and the importance of recognizing their truths.

According to Borowsky, a large goal of this event series is to bring more awareness and conversations to the topic of atrocities faced during War World II.

“There are many people unaware of the evils committed by both the Nazis and Communists,” Borowsky said. “I would argue that many have not learned the lesson from the cries of millions of victims. Maybe because we’re living in a day and age in which, thanks to a relatively long period of safety and security, ‘it can’t happen to me’ seems to be a prevalent attitude…. It’s all too convenient to be detached and forget about others, not only far away, but even close by us.”

“Remembering this dark point in history allows us not only to commemorate the victims and the lasting effect it has had on their families to this date, but to guard against the beginnings of such movements within our own society,” he said. “The in-depth study of history from a variety of perspectives, and discussion among people is one of the healthiest investments we can make.”

Barcyzk shared how this awareness can be made effortlessly through the use of music and art.

“The idea that music allows for the expression of another dimension of our lives and personalities and a force to both commemorate and celebrate, has been explored time and again in history,” she said. “One of my own personal favorite quotes is by Victor Hugo: ‘Music expresses that which cannot be put into words and that which cannot remain silent.’”

Sunday’s concert at TU precedes the concerts that Traubas and The American Virtuosi will be holding during their U.S. Tour, titled “Never Forget.” The tour, which will run through April 22, consists of performances in Washington D.C., Pennsylvania, New York, New Hampshire and Vermont.

Before his departure from Towson for future performances, Traubas had one lasting notion to share with anyone willing to listen.

“It’s like the U.S. money – ‘united we stand, in God we trust,’” Traubas said. “We need to try to live that saying. It should not just be on paper; it should be in life.”