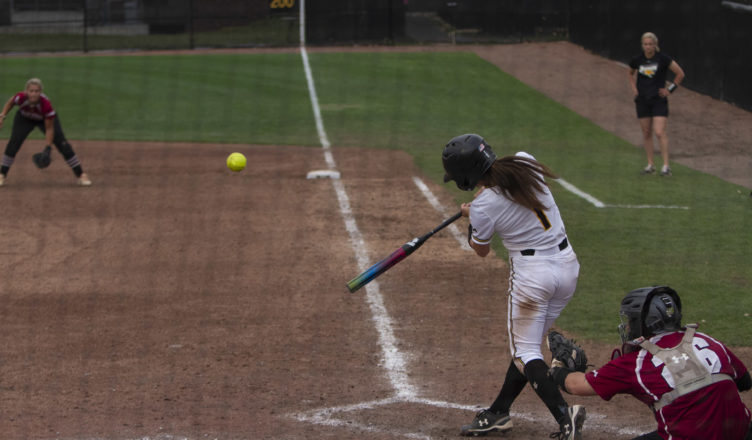 To wrap up the longest homestand of the season, the Tigers hosted Charleston in a three-game series this weekend at Tiger Softball Stadium. After dropping game one on Saturday, Towson walked off in game two to even the series before falling on Sunday in the series finale.

Going for the series victory on Sunday, the Tigers fell behind early as Charleston built a 4-1 lead through the first three innings. Towson cut into the Cougar lead in the fourth with a groundout by freshman pitcher Breanna McDowell, bringing home the runner from third.

A double later in the inning by junior first baseman Madison Wilson brought the Tigers within one heading into the fifth inning. Charleston pulled ahead to begin the inning with a three-run home run, taking a 7-3 lead. Looking to make a comeback, junior pitcher Smith-Harrington stepped to the plate and hit a home run to left field to cut the deficit to three.

But that would be all that Towson could do, falling in the final game 7-4.

Sophomore pitcher Melissa Abrahamian took the loss after only managing to go two innings before the Tigers went to the bullpen.

Abrahamian was unable to record a strikeout, and freshman Sara Johnson got all four of Towson’s strikeouts in the game.

“Charleston kept answering, as soon as we got it close they answered back,” said Head Coach Lisa Costello.

Looking to even the series in game two, the Tigers had some difficulties at the plate, collecting just one hit through the first two innings and retiring in order in the second inning.

After two scoreless innings, Charleston scored the first run in the third inning coming off a base hit RBI.

With the bases loaded in the fifth inning, senior utility Nicole Stockinger brought home the first Towson run with a base hit to left field. Later in the inning, McDowell brought in two more runs to give the Tigers a 3-1 lead.

The Cougars tied the game in the sixth inning thanks to a bases loaded walk and a single, setting up for final inning madness.

With two outs in the bottom of the seventh inning, the Tigers executed a double steal to put runners on second and third. Wilson immediately came to the plate and hit a base hit to right field bringing, Kidwiler home to win the game 4-3. This marked Towson’s first walk-off win this season.

Towson outhit Charleston 11-8 and McDowell and freshman shortstop Gracyn Houmis each had multiple hits for the Tigers. Abrahamian pitched a complete game allowing eight hits and three runs and struck out six batters.

“I thought we had a better approach in game two, we took better swings and better pitches,” Costello said.

In game one, the Tigers fell behind early as Charleston took a 3-0 lead after the second inning.

The Tigers got on the board in the seventh inning as freshman utility Julia Jackson brought in a run on a base hit. Unfortunately for Towson, this was its only run of the game as the Cougars took game one 5-1. This broke Towson’s four game winning streak that started on April 7 against Delaware.

Johnson pitched a complete game, allowing eight hits while striking out four batters. Despite Johnson’s efforts, the Tigers couldn’t do much at the plate.

“We need to have a good approach at the plate and hit balls hard,” Costello said. “Our pitchers are doing a good job and we need them to keep doing that. We need to clean up our defense a little bit.”

Towson returned home to begin an eight game homestand against Howard and Georgetown. After sweeping Howard in the two-game series, the Tigers defeated Georgetown to increase their four-game winning streak this week at Tiger Softball Stadium.

Looking for the longest winning streak this season in nearly a month, the Tigers faced Georgetown on Wednesday. Towson fell behind early after a base hit to second brought home the runner, giving the Hoyas (11-28, 4-6 Big East) an early 1-0 lead.

Towson responded with a four-run second inning, starting with a home run by Stockinger.

A base hit by Houmis advanced two runners while the third runner scored.

“Houmis stepped up and she put together some good at bats,” Costello said.

Junior utility Jessica Swistock scored later in the inning on a passed ball to give the Tigers a 3-1 lead. With the bases loaded, Wilson took ball four and brought home the runner from third collecting a walk RBI.

Towson wasn’t done in the second with only one out, as a sacrifice fly by Smith-Harrington brought home the fifth run of the inning. The following inning got off to a strong start as McDowell went deep for a two-run home run to increase Towson’s lead to 7-1.

After a scoreless fourth inning, the Hoyas cut Towson’s lead to four as a base hit brought home two runners. In the sixth inning, a double by Smith-Harrington and sacrifice fly by Stockinger brought home one run each, increasing the Tigers lead by six runs.

Towson concluded the game by retiring Georgetown in order taking a 9-3 victory.

The Tigers looked for the series sweep in game two of their doubleheader with Howard (11-22, 4-3 MEAC) and got off to a fast start with a home run by Wilson.

“She’s coming back after she missed a few games so it’s good to see her drive the ball,” Costello said.

Howard responded with a base hit RBI in the following inning. In the second inning, another Bison error brought home junior catcher Lindsey Toneygay from third and moved freshman pitcher Julia Jackson to third. The following inning, the Bison tied the game at 3-3 with two doubles each bringing home a runner.

A Bison base hit brought home the runner from second later in the inning to take the lead 4-3. This lead wouldn’t last long as Stockinger hit a home run the following inning to retake the lead for the Tigers 5-4.

“We tried to make the game as long as possible, we’re always trying to win the next inning so we try to take the scoreboard out of it,” Costello said.

In the fifth inning a base hit by Swistock brought home the sixth Tiger run of the game.

In game one against Howard, the Tigers took advantage of a Bison error picking up two runs in the second inning. In the next inning, a base hit by Jackson brought home the runner from third to give the Tigers a 3-0 lead.

Towson added two more runs in the fourth with two doubles by Poulich and McDowell each bringing home a runner. The final two Towson runs came across in the fifth from a triple to center field by Wilson. Howard would prevent the shutout in the seventh scoring two runs off a solo home run and a walk with the bases loaded.

“She changed her speed really well; she threw different then what she did over the weekend,” Costello said. “She used her off speed pitches good against a good hitting team who could put the ball in play.

The Tigers finish out the homestand on Wednesday, April 17 with a doubleheader against Villanova. Game one against the Wildcats is scheduled to start a 2 p.m.