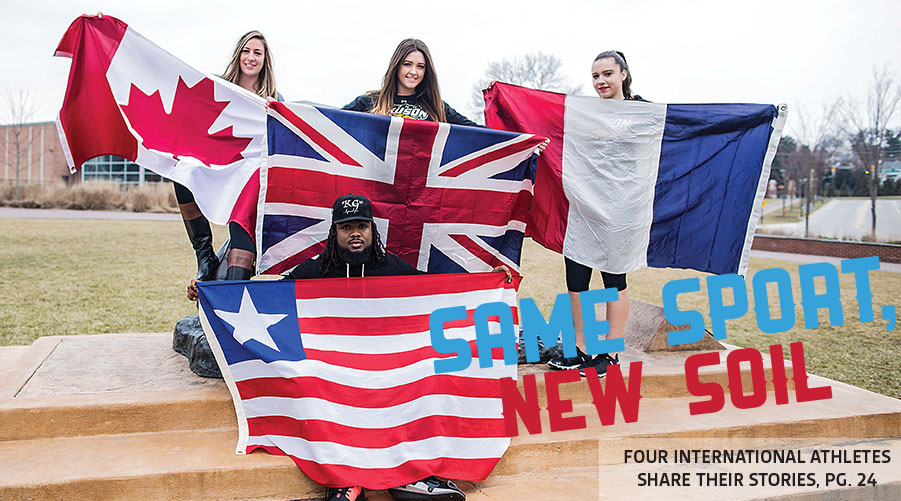 As Towson University grows, so does its reach. Students have traveled from across the country and further for Towson’s academics, student programs and athletics. The Towerlight interviewed some of Towson’s international student athletes in order to tell the story of what it is like attending a school hundreds of miles from home.

Winter Storm Jonas was no big deal for sophomore Emily Gillingham. Her hometown of Kitchener, Ontario gets, on average, five feet of snow every year.

“I remember the first time we got snow [here] and no one was driving and everything got canceled,” Gillingham said. “Meanwhile I am just like, ‘this is flurries compared to back home.’”

In fall 2014, Gillingham left Kitchener to play lacrosse at Towson after a childhood filled with ice hockey.

She first transitioned from hockey to men’s box lacrosse, the version of the sport more popular in Canada, and men’s field lacrosse with her older brother because there were no women’s team available.

“I definitely started with ice hockey like every Canadian does,” Gillingham said. “But from there I just followed my brother. I’ve been playing the game of lacrosse since I was six or seven years old, but I’ve only been playing women’s field lacrosse for about five years now.”

Gillingham misses the physicality that the men’s game brings, but she has made sure to keep aggression in her repertoire at Towson.

“The boys were so hard hitting,” Gillingham said. “I miss that stuff.”

At Towson, Gillingham is over 450 miles away from her family and home.

Gillingham said she misses her family but has been grateful for the support of her friends, teammates and teammate’s families.

“For those of us who can’t go home, we all got together and had a big Thanksgiving together,” she said. “It’s pretty much, they’re my replacement family.”

Kitchener has learned to embrace the Towson area in the past two years and can even see herself living here after graduation.

“I love it here,” Gillingham said. “This is where my life is now and I am happy about that.”

The North Atlantic Ocean and 3,623 miles separate sophomore Nicole Shakhnazarova from her family in London.

She said that it hasn’t been easy, but since arriving at Towson in the fall of 2014 to play collegiate tennis, Shakhnazarova has been enjoying her time as an international athlete.

“I have a little sister so I miss her a lot,” she said. “I miss my friends, it’s very difficult. But I am having the best time here. I know I miss out on some things sometimes but it’s just part of the package.”

Whether it’s traveling, shopping or enjoying American holidays, Shakhnazarova and has found some advantages to living abroad.

“Before I went back for Christmas break I saw a movie and it wasn’t even out yet at home,” she said. “I found that pretty cool.”

The tennis team has four other international athletes, which has helped Shakhnazarova make the transition.

“Whenever I feel down or miss home I can turn to any of my teammates, my coach, my assistant coach and my other friends who are non-athletes,” Shakhnazarova said. “I feel like everyone understands what it’s like even if they haven’t experienced it.”

In 2014, Shakhnazarova set a school record as the first Towson freshman to win 23 singles matches.

“I love my classes and my major here,” Shakhnazarova said. “I just think the whole college experience is something that everyone should try out.”

On her first day of school at Towson, Sophie Lesage used a map and tried her best to get from class to class.

“Every little thing was a challenge,” Lesage said.

Now Lesage is in her junior year at Towson and since moving from France to play collegiate tennis, she has mastered the art of finding her way around campus. Coming to the U.S. was not her first international move. Lesage lived in Argentina before moving to Paris. Despite moving across the globe on more than one occasion, Lesage considers Paris her home.

“I have lived most of my life in Paris,” Lesage said. “It’s my favorite city in the world.”

Lesage has enjoyed her time in the United States, but living in the country came with challenges early on.

“It took me like two or three weeks to be comfortable with English,” Lesage said. “It’s obviously different to talk in an English classroom than in real life.”

Despite the early struggles that Lesage faced, she has fully embraced living in the U.S..

“I didn’t know that many things about D.C. before and I actually love it,” Lesage said.

When she was young, Lesage played both soccer and tennis, but ultimately chose to focus on tennis.

“I picked tennis because I thought it was a pretty sport, pretty feminine, so I thought it would be a good sport for me, she said.”

In her freshman year at Towson, Lesage had a team best 16-5 singles record and led the team with 10 wins in doubles play.

“I am proud to say that I go to Towson,” Lesage said. “I look forward to coming back in twenty years after I graduate because I see this school improving on different levels.”

When junior running back Darius Victor steps onto the field Saturday afternoons at Johnny Unitas Stadium he always counts his blessings.

“I play for God first of all because I am blessed,” Victor said. “He gives me the abilities and I am just doing the fun part.”

Victor was born in Liberia, Africa, in 1994. When Victor was young, his family relocated to the U.S.. Victor said he doesn’t remember much about his home country.

“There was a war going on,” Victor said. “I am just fortunate that I made it out, that my family made it out because I know that most people didn’t.”

Living in the United States didn’t come without hardships for Victor as his brother was shot and killed just steps away from his home in Hyattsville.

“It’s like, ‘wow we made it out of a warzone’  and still my brother got shot,” Victor said. “Some things you just can’t escape.”

Despite losing his brother, Victor feels that having lived in Hyattsville helped mold the man that he is today—including his volunteer work with the Boys and Girls Club.

“I just want to be an example for all the kids,” Victor said. “Not just the kids in Liberia but kids from low income communities like I was in Hyattsville. That’s all I want to do is give back. That’s how I want to spend my days.”

As a freshman, Victor was named 2013 CAA Rookie of the year after appearing in 14 games and rushing for 629 yards and seven touchdowns.

In his sophomore year, Victor ranked 17th in the Football Championship Subdivision (FCS) with 1,305 rushing yards and tied second in the CAA with 12 rushing touchdowns.

Despite dealing with a nagging foot injury in 2015, Victor averaged 4.9 yards per-carry and finished the season with 1,021 rushing yards and a career best 15 rushing touchdowns.

“I know I am blessed and nobody can stop God’s plans,” Victor said. “I am just doing what I have to do, taking it one day at a time and not focusing too far into the future.”