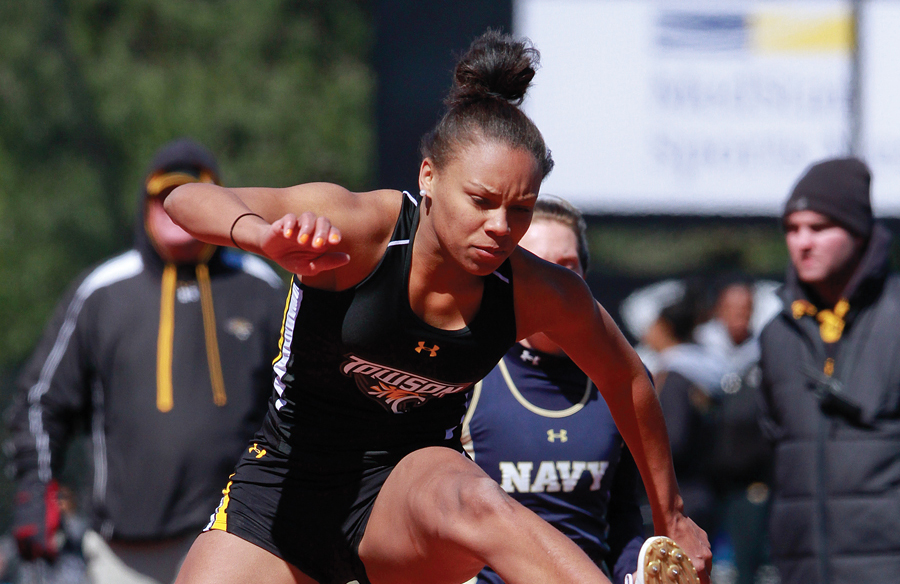 The Tigers hosted and finished second with a total of 178.5 points in the Towson Invitational on Sunday at Johnny Unitas Stadium.

“I thought it was a very good meet for us,” Head Coach Roger Erricker said. “We had some very good performances and some of our ladies really stepped up and did a very nice job.”

Along with a pair of first-place finishes from Freeland, junior captain and hurdler Katelynn Williams won the 100-meter hurdles with a time of 15.99 and senior distance runner Ashley Simmons won the 10,000-meter run, her first try at the event, with a time of 38:08.74.

“I’m used to doing the 3,000-meter run and the 5,000-meter run, but I already have my name on the top 10 record board for those events so I wanted to try the 10,000-meter run before I graduated and it was, surprisingly, a success,” Simmons said.

“Ashleigh Stallings had a really good day,” Erricker said. “She won the javelin and qualified for the ECACs.”
The Tigers also finished first in the 4×100-meter relay, with a time of 48.53.

Sophomore high jumper Jackie Lavitt came in second place with a height of 5 feet, 2.25 inches. Senior captain and hurdler Emily Wenger finished second in the 400-meter hurdles with a time of 1:04.64.

“It was a great feeling,” Wenger said. “It’s so different competing on our track rather than working out on it.”
The Tigers also got second in the 4×400-meter relay with a time of 3:58.31.

“I am very proud,” Williams said. “The team has been working hard in practice and it showed today.”

Towson will look to carry the momentum from its previous two meets into the Liberty Invitational in Lynchburg, Virginia, which will take place April 3 and 4.

“I think we have a lot of potential to do very well at Liberty,” Tauber said. “We have a lot of fun as a team when we travel but we will also have good competition at Liberty which also helps.”